Data show automated car safety technology has already cut into collision claims volume but in some cases increased claim severity, Progressive’s chief financial officer said earlier this month in the latest — and perhaps the most telling — confirmation of the impact of the technology.

CFO John Sauerland presented Progressive’s stability control and collision warning research to investors during a May 14 webinar that offered a few other highlights of interest to collision repairers. (Here are the slides for the entire presentation.)

Electronic stability control has existed for about 20 years and can be found in 50 percent of the fleet, Sauerland said, while forward collision warning only has penetrated about 5 percent of vehicles on the road during its decade of existence.

“It takes a long time for technology to flow into the fleet,” Sauerland said. He said that such systems typically aren’t installed on used cars, which means penetration “continues to be a slow glide.” 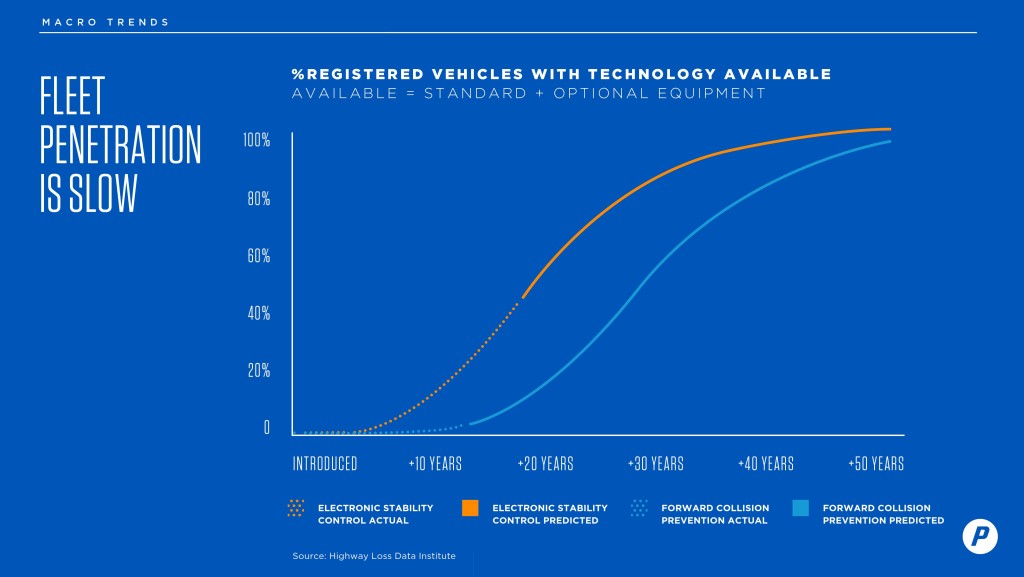 Stability control has certainly reduced accidents, but Progressive drilled deeper, according to Sauerland.

Now, the company is looking at factors such as whether a young driver in a SUV benefits more from stability control than an older one.

“We want to lead in terms of pricing segmentation,” he said.

Collision repairers are probably already aware of the impact of stability control, but what about the newer forward collision detection features — which can even advance on some models to automatic braking.

Accident frequency is “definitely” down with collision warning — and that data set included vehicles without the more advanced automatic braking — but severity has risen.

That trend has been observed in other studies, most recently in Thatcham’s United Kingdom analysis, but the kind of aggressive number crunching Sauerland described at the nation’s No. 4 insurance company should make collision repairers really take note.

And severity — which at least raises the invoice price on the crashes that still will grace your shop — might be reduced by different engineering.

“In a lot of the vehicles, they’re mounting the radar right behind the front grille,” Sauerland said. “If they don’t avoid the accident, little more damage than on other vehicles.”

But the overall impact still appears to threaten the collision repair business of the future.

Progressive CFO John Sauerland presented Progressive’s stability control and collision warning research to investors during a May 14 webinar, shown here in a screenshot. (Screenshot from www.Progressive.com)