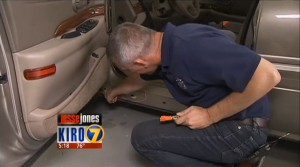 “We expect repairs to be done correctly the first time. But who’s to blame when an insurance company sends you to a shop that misses major damage — not just once, but twice?” KIRO’s Jesse Jones says in a video posted Monday, telling the story of a Washington woman whose vehicle was not only poorly repaired twice — but which the insurer said should have been totaled both times.

Rita Peha’s 2003 Buick Le Sabre was in 2009 and 2011 crashes — neither Peha’s fault — and is now busing her 100-year-old mother to appointments for the third month because of poor work by an insurer-recommended repairer who has since gone out of business, Jones said. Even though the unnamed insurer acknowledges the LeSabre should have been totaled, it is embroiled in a legal battle with Peha, leaving her without personal transportation, according to Jones.

“I just wanted my insurance company to stand by me, and they didn’t” she tells KIRO in the video.

In 2009, the now-defunct Autohound contradicted industry standards and used body filler in places it shouldn’t have, Haury’s Lake City Collision owner Jeff Butler told Jones. In 2011, the shop missed a potentially life-threatening kink in the left frame rail, according to Butler, who reinspected the Buick.

Butler said his reinspections found mistakes at a rate similar to the 60 percent of reinspected vehicles checked by the California Bureau of Automotive Repair, according to Jones.

Karl Newman of the Northwest Insurance Council told KIRO there was no incentive for an insurer to put a vehicle on the road which could result in a higher claim later.

Jones urged consumers to do their research and not automatically use the shop recommended by an insurer, as well as get a repaired vehicle reinspected — just in case.

“Can you count on your car insurance in a collision?”

Featured image: Haury’s Lake City Collision owner Jeff Butler points out where Bondo was improperly used in a 2003 Buick LeSabre in this video screenshot. (Screenshot from video at www.JesseJones.com)