Advertising and other cuts are also possible — which means some of us will probably hear less of pitchmen John Krasinski and Dennis Haysbert — to meet CEO Tom Wilson’s reiterated commitment to an Allstatewide underlying combined ratio of 87-89.

“We’ve taken action and will continue to take action to improve profits based on our data,” Wilson said during a conference call with analysts Tuesday.

The company has a plan to hit the corporation’s Allstate, Esurance and Encompass brands with higher premiums, tighter underwriting and lower expenses.

“We think this is very doable, that we can get margins back to where they were,” Wilson said. The company last year had raised premiums 4.8 percent at Encompass and 1.5 percent

A combined ratio is a measure of an insurer’s profitability. A 100 means it’s paying out as much in claims as it’s taking in from premiums, so insurers want it below that threshold — and certainly not above it, as Esurance and Encompass were between April and June and the Allstate brand nearly was. The company as a whole had a combined ratio of 100.1 in the second quarter.

The underlying combined ratio referenced by Wilson involves an insurer’s margin when you disregard catastrophic losses — unpredictable by even a business’ smartest actuary — and a couple of accounting factors. It shows Wall Street or other stakeholders just how good an insurer’s managers really are at handling the business issues they can control.

Though the Allstate and Encompass brands both kept underlying ratios below 100, Esurance still exceeded it in the second quarter. More importantly, all three were in the red with their auto insurance combined ratios, showing auto losses which helped made the company around half as profitable — netting $355 million compared to $645 million — than it was a year ago and thus less desirable to investors.

Allstate as a whole lost $111 million on its auto business from January-March, erasing the $91 million it made from its homeowner’s insurance.

After crunching the numbers, Allstate came to the conclusion that its auto insurance red ink mostly came because Americans as a whole were driving more.

Matt Winter said that in the January-March first quarter, Allstate looked at geographies, risk class, and customers trends to explain auto claims and couldn’t escape the conclusion that “external factors” were to blame — “most notably, by the increase in miles driven,” followed by weather.

“What we observed in the second quarter confirmed that,” he said.

Miles driven and frequency “historically been very tightly correlated with one another,” according to Winter, and that was evident in a slide offered as part of the quarterly presentation. 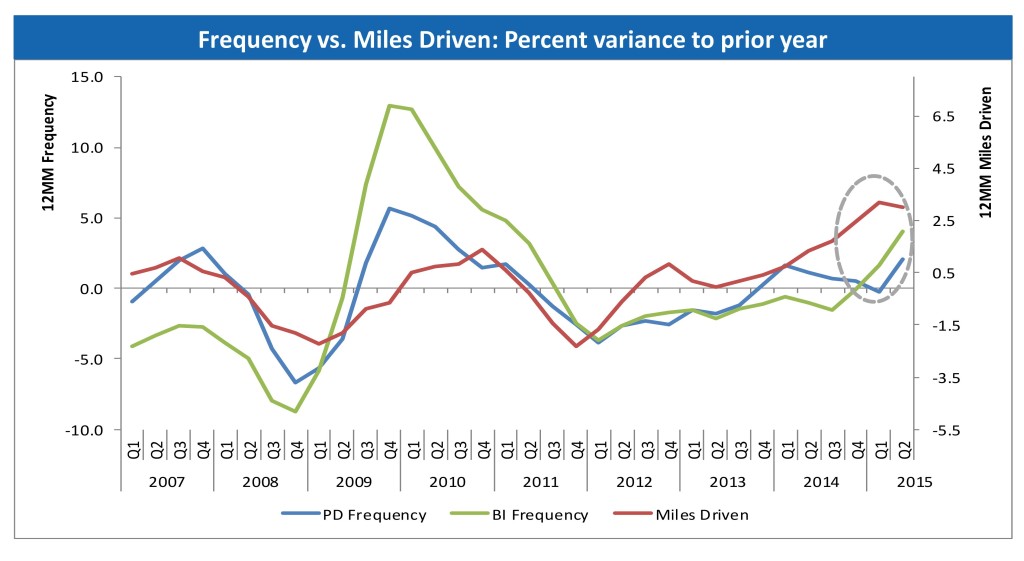 And while new customers to increase claim frequency in what Winter called the “new business penalty,” it only really impacted the combined auto loss ratio of the company 0.5 to 1 points.

“Many of these trends are related to increasing vehicle complexity,” Winter said, echoing other experts’ predictions and comments.

Allstate is seeing more newer-model vehicles on the road with more electronics, and repairers are using more parts and more labor hours to repair them after crashes.

It’s not just that the cars have gotten more advanced. The bulk of the increase in miles driven came from interstate driving, which results in more severe crashes because of the speed.

It’s to a point where Allstate has taken notice.

“We are also concerned about and reacting to what we believe could be some additional pressure on loss severity,” Winter said.  “… As a result, we will continue to focus on operational excellence in our claims operation to ensure maximum efficiency, rapid cycle time and the proactive management of loss costs.”

The translation: Expect Allstate adjusters to take a harder look at the speed and cost of your repairs if you’re in a touchy market.

On the plus side for repairers, Allstate seems to see premium increases as the primary way to improve its margins.

The last quarter’s rate increases and the ones planned for this quarter will take a little while to offset Allstate’s losses, as the company’s billing schedule produces a six-month lag from increase to revenue. But the company still feels more are merited, and financial analysts on the conference call Tuesday seemed to indicate the same.

Winter said the “targeted and segmented rate actions” and tougher underwriting would affect “specific, underperforming segments” — which means not all parts of the country or even customers within a specific part could feel them.

State regulators haven’t objected to the insurer’s premium increases, which Winter said the insuer is “accelerating to the extent possible”

“So far, we’ve been quite successful with the states,” Winter said. “… Our acceptance and approval level is high.”

Encompass in particular will be getting rate increases; the company to be a big money-losing headache for Allstate.

“This has been a difficult channel for us to maintain profitability,” Wilson said.

Though the company plans cuts, it will continue to spend on technology such as the auto insurance driver telematics programs DriveWise and DriveSense, which have grown to a combined 881,000 customers.

Such systems likely will allow insurers to better tailor auto policies to each specific driver, and Wilson in May raised the idea of not just collecting driver data but selling it. Wilson was then bullish about the technology, calling it “as powerful as credit was” when actuaries started using it in the 1990s to forecast driver performance.

Last month, he indicated to Bloomberg a similar interest in giving customers a break on premiums in exchange for selling their information.