Allstate’s four-part “comprehensive program” to improve margins — including a harder look at auto claims — will continue in at least some U.S. markets, the company told investors earlier this month.

“Given the cost trends we and others are experiencing in auto repairs, there’s also a heightened focus on both effectively and efficiently managing claim loss costs,” CEO Tom Wilson told analysts on a Nov. 3 investor call.

Few other details were given about claims management by the company, which also owns Esurance and Encompass. Allstate investor relations Vice President Patrick Macellaro euphemistically described it on the call as “claims operational excellence and precision given cost trends.”

So if Allstate’s been denying more claims or being more nitpicky in your auto body shop’s area, that’s why — and unfortunately, it probably won’t change for a while.

The nation’s No. 3 insurer will maintain higher auto insurance rates as well — and didn’t seem to rule out broadening their scope to other markets —  to hit its desired underwriting profit margin.

“We continue to evaluate and run our business on a local, market-by-market basis,” Macellaro said. “We continue to aggressively pursue rate increases and adjust our actions going forward to ensure appropriate auto returns.”

There’s irony there for collision repairers told by the insurance industry they can’t charge the rates they want or use the markups they want on parts.

Allstate-branded auto insurance prices have risen 3.4 percent in the first nine months of 2015 from that time last year.

Esurance has increased 4.1 percent, and Encompass is up 7.4 percent.

Inflation has been 0 percent for the year ending September 2015 compared to the prior year.

The Allstate brand of auto insurance alone is expected to collected approximately $600 million more in net premiums through 2017 as the rate increases take effect with customer renewals. 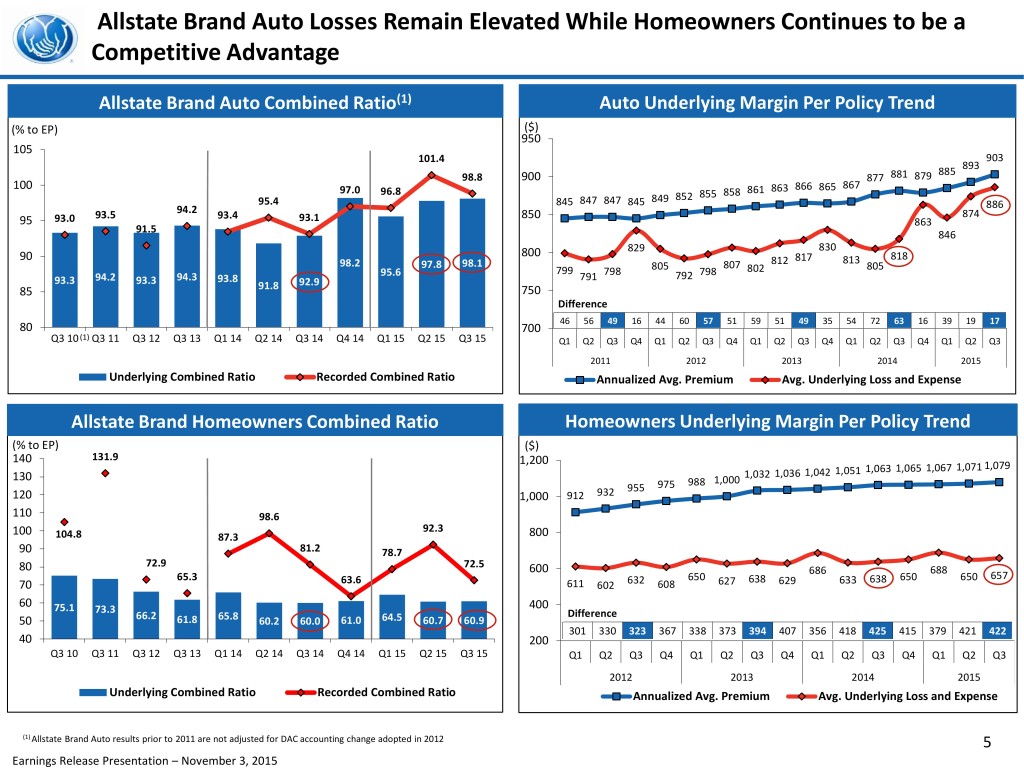 It became clear to Allstate earlier this year it couldn’t hit the companywide 87-89 underlying combined ratio it’d been promising investors as early as last quarter, according to Wilson.

So it moved the goalpost to promise a maximum of 89.5. (DRP shops, let us know how that tactic works when you miss an insurer’s KPI.)

A combined ratio is a measure of an insurer’s profitability. A 100 means it’s paying out as much in claims and expenses (all those ads, among other things) as it’s taking in from premiums.

Thus, insurers want it below that threshold — and certainly not above it, like Allstate was (100.1) in the second quarter.

Allstate’s combined ratio was 93.6 percent in the third quarter, up 0.1 points from the prior year. So it still made money.

Overall, companywide third-quarter net income was $621 million — admittedly, down 17.2 percent from the year before.

In this case, Allstate has since January attempted to control it by raising rates, making it tougher to obtain insurance, taking a harder line with claims and cutting back on expense spending, Wilson said.

“All of these actions are well-thought-out,” he said, describing their scope not as nationwide but in a “highly targeted and local manner.”

An Allstate investor relations spokeswoman wrote in an email last week that she couldn’t comment further on what kind of proportional dent each of these four steps traditionally makes on Allstate’s combined ratio.

For the first nine months of 2015, the underlying combined ratio sat at 89.1. The company made $1.6 billion in net income during that time.

The last three months are “volatile” with bad weather and darkness, according to Wilson, affecting auto and home claims and pushing the quarter and year’s ratio upwards. It’ll be interesting to see by how much.

“I feel good about where we’re at,” Wilson said.

Auto claims displaying higher crash frequency and severity seem to be driving Allstate’s margin woes. This can probably be traced to more miles driven in larger, newer cars in a time of low gas and a decent economy.

“About a year ago, actually, the frequency and severity started to take off,” Wilson said. “… When you have a rapid spike in costs like that, we need to obviously recover those costs quickly.”

Wilson described both trends as national.

“This is the first time it’s really happened across the country all at once in a long time,” he said.

But, he noted, Allstate’s seen that “movie”at the state level before.

Asked if the frequency in auto claims has stabilized or if another rate increase would be necessary, Allstate President Matthew Winter, who also leads Allstate Personal Lines said “components of it have stabilized, and components of it appear to still be volatile.”

“We are assuming the trend line continues to go up at its current levels,” Winter said, though there appeared to be a “narrower range” of frequency increases from the prior year.

Winter said he’d like to see some more quarters of data before calling frequency stabilized and Allstate lifts “our foot off the rate lever.”

“Our plans are to continue to take rate wherever justified and indicated,” he said. “… We haven’t leaned back and relaxed yet.”

This chart from Allstate’s third-quarter 2015 financial earnings investor call presentation shows some of the company’s margins. (Provided by Allstate)