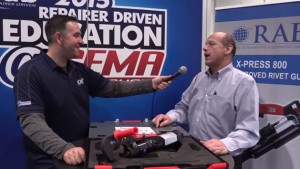 “People are seeing today what they’re going to see now in the future,” Gruskos told Society of Collision Repair Specialists Executive Director Aaron Schulenburg on the final day of the show floor.

Gruskos taught the SCRS Repairer Driven Education session “Removing, Replacing and Joining Advanced Materials,” and an expert from Wielander+Schill, whose equipment RAE distributes here in the U.S., sat on an advanced welding, riveting and adhesives panel during the OEM Collision Repair Technology summit.

“The greatest compliment I could get was people who were in our class five years ago were saying, ‘Wow. what you said five years ago is now true. It’s all come true,'” Gruskos said.

Fortunately, the engineers whose products Gruskos distributes not only supply OEM-approved rivet guns to they aftermarket, they in at least one instance supplied the actual OEM rivet, he said.

He and Schulenburg gave away the $10,900 XPress 800 rivet gun, which carries OEM-approved adaptors for work on Mercedes and Tesla vehicle as well as being the only gun so far approved for the Cadillac CT6.

“Our engineers worked directly with GM’s engineers, and we’re excited that we are the rivet gun,” Gruskos said.

GFS is the exclusive American distributor of Bellini’s REVO infrared systems, and Lowder said that technology drew most of the questions at his company’s SEMA booth. (Find out more about how it works in this feature.)

“Shops are looking for faster repairs and better results, and the REVO really delivers that for them,” he said.

“Essentially, we’re gonna cure paint from the inside out instead of from the outside in, which is how you do it conventionally,” he said.

It was a good SEMA for GFS, Lowden told Schulenburg. By the second day, the company — which completed its REVO offering debuted in SEMA 2014 — had surpassed its highest past lead tally for the entire show.

Schulenburg said that backs up the message SCRS spreads to exhibitors — it’s a good show for the collision repair industry.