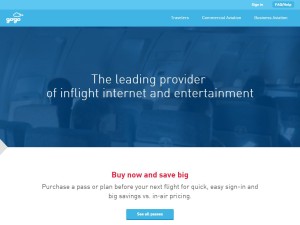 Editor’s note: From time to time, Repairer Driven News features pieces by prolific national columnist Gene Marks. While despite not being directly related to collision repair, they should still prove valuable to the small-business owners and employees which make up much of the industry.

Ho-hum. Another day, another $15.95 lost to Gogo in-flight Internet. The guy next to me on my flight to Miami has his arms crossed, peering at his laptop screen – I can, figuratively, see the steam rising from his head. The lady across the aisle I see has just given up and ordered another drink. Good for her. I get it. This is life in the air. This is a world with Gogo – the Internet service that doesn’t work as promised.

The comedian Louis CK has a great routine where he makes fun of airline passengers that complain. He mentions a guy sitting next to him who’s frustrated that his Internet doesn’t work.

“You’re sitting in a chair,” he says. “In the SKY! How can you not be grateful?”

He’s right. We should all be more appreciative that we’re hurtling through the clouds at 500 mph to our destination where we arrive (mostly) on time and almost all the time safely. It really is a modern miracle.

So why do we complain about Gogo? It’s not because we don’t appreciate that we have access to the Internet while flying. That is also a miracle. But it would take a miracle if it actually worked as promised. That’s what makes customers mad. It’s paying for a service and the service is not being delivered.

You can pay up to $30 for Internet on some flights — $30! That was Gogo’s idea to fix things — charging more discourages people from using the service and thereby improves bandwidth. It’s another brilliant idea — that failed. When people pay this kind of money to get access to the Internet they have this crazy, insane expectation that the company who is pocketing their money will actually give them something in return.

But is that service provided? No. I’m cool that we can’t stream video. Or that it’s markedly slower than on the ground. I’m ready for that. But my experience with Gogo fails on many other levels.

I am not kidding here, I’m probably forced to turn off my laptop and read a book (or write a blog like this one) at least 50 percent of the time. Maybe more. I’m not asking for my money back because I don’t’ want to waste the time. I hate doing that. It’s not the money. It’s the promise.

Gogo just doesn’t work. It freezes. It disconnects. It absorbs one key-click every 10 minutes. It is truly unworkable half the time. And I’m just checking email. Is it because I’m over a lake right now? Or passing through a mountain range? Whatever — I’m still paying, Gogo. I’m still paying!

In its defense, Gogo’s no different than many other tech companies. For years, I’ve suffered from technology that doesn’t work very well — printers that inexplicably go offline, software that freezes, database errors and network problems. That’s why so many technology companies either charge maintenance or require us to rent their products.

In either case, we’re paying a monthly fee to fund an army of developer geeks in Silicon Valley and customer service reps in India who waste our time fixing problems that wouldn’t be a problem if the company just delivered what was originally promised. For a tech company, “working” means functional 90 percent of the time.

Which brings me back to Gogo. It’s not just me, my seatmate and the poor lady across the aisle taking solace from her her second Bloody Mary who are annoyed with them.

American Airlines sued Gogo to get out of their contract. In effect, American said to Gogo “your service sucks and our competitors are using better technology – so go away, GoGo.”

Go get ‘em American! If we weren’t going through turbulence right now I’d give you a standing ovation. So would Ms. Bloody Mary, I’m sure, if she were able to stand at all. American dropped the lawsuit just this week, the Verge reported, but the message is loud and clear: Fix your crappy service or you’re outta here.

American can do this because American, for all that people may complain about the airline industry, actually does what they say they’re going to do. They get us safely to our destination. Sure, sometimes events beyond their control preclude them from doing this on time. But they step up and deal with these problems.

I fly a lot — I’m an Executive Platinum on American which I’m told is the top of the depressing business-traveler heap. Traveling really does suck at times. But I’m amazed at how well this industry works. I’m surprised that American has put up with Gogo’s lousy service for so long.

So what’s the lesson here? Don’t mislead people like Gogo does. Do what you say you’re going to do. Don’t take people’s money for something that works maybe half the time. It’s not a good way to do business. And it’s certainly not a long-term recipe for profits. Unless you’re Gogo’s attorneys.

“You Never, Ever Want to Run Your Business Like Gogo”