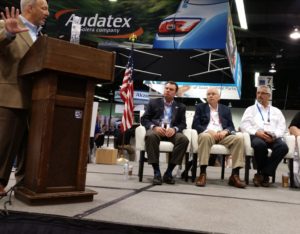 Though the answers ultimately still might not be what the underwriters want to hear, OEMs earlier this month were receptive to insurers’ requests for greater clarity into what conditions and model years demand pre- and/or-post scans.

State Farm property claims consultant Chris Evans urged fellow NACE panelists from GM, Audi, Nissan, Honda, Toyota and FCA whose companies hadn’t yet released position statements to do so.  (Hat-tip to Collision Hub, whose video coverage of the entire panel helped us double-check and elaborate on a couple of comments.)

Both Evans and panelist Gerry Poirier of Farmers also suggested the OEMs get the information — down to variations even within a model year, Evans noted — to estimating services.

“I would just urge any car company that hasn’t crafted a position statement, or if you’re open to amending your current position statements, just to offer greater specificity … and clarity around the when and that element,” said Evans, who earlier stressed he couldn’t speak formally on behalf of State Farm. (Both he and Poirier said they were there for education.)

“We’re certainly, again, open to doing what is right for the car and the customer, but again, when it’s very broad, it’s very difficult.”

For example, he said earlier, if there’s a “very minor dent” in a Honda — requiring just a door panel replacement, do you need to scan?

“That’s a legitimate question,” he said.

But know that when OEMs issue positions, “they don’t go unnoticed” or ignored at State Farm, according to Evans.

“We take them very seriously,” he said.

Learn more from OEMs about scanning their vehicles and hear about scanning solutions from automakers, third-party scan tool manufacturers and other providers at “Restoring Vehicle Functionality through Electronic Technology and Diagnostics” on Nov. 3 at SEMA. The session is part of the 2016 OEM Collision Repair Technology Summit hosted by the Society of Collision Repair Specialists during the Repairer Driven Education Series Nov. 1-4. Register here.

FCA, Nissan, Toyota and Honda all have issued position statements. GM and Audi both promised such documents — though Audi’s Mark Allen called scanning necessary, and GM’s John Eck implied as much during the NACE panel.

Poirier, strategy manager and technical adviser for Farmers, agreed with Evans that the company “would love” to sit down with OEMs and obtain greater specificity about when scanning was needed.

With car-specific information and such data conveyed to the information providers,  “a lot of that friction would go away,” Poirier predicted.

“That information is critical and really is becoming essential for estimating vendors to incorporate into their systems so we’re writing accurate estimates,” he said.

The interest isn’t “wrestling, and fussing, and debating” over whether something needs to be done and how much it costs, Evans said.

“This is really an estimating vendor issue kind of at its heart,” he said. ” … It needs to be an included operation.”

A brief digression: We should point out a potentially serious concern for auto body shops with the concept of making the procedure an included operation.

If a collision repairer has to sublet estimating to a dealership or use a middleman technology like asTech, a simple labor time in an estimating service at a rate an insurer wants to pay might not be adequate to cover the shop’s cost and markup.

In fact, a shop which did its own scanning in-house and was amortizing the cost of the investment in equipment and training through rates also could run into the same issue. (See more discussion here.)

OEMs were receptive to greater insurer dialogue and the idea of amending their position statements for more clarity.

Allen stressed to the audience that both industries are discussing technical issues. “Plese don’t think that we’re not talking,” he said.

But OEMs did note that in fact, models as far back as 1996 might need scanning. So the answer might be more vehicles than insurers perhaps want. And as Anderson pointed out, this was already in repair procedures, even if uneducated shops aren’t doing it.

“This is change,” Chris Tobie of Honda pointed out. “And change is difficult for people.”

Or as Poirier noted, this all seems new and contentious now, but he predicted it might become as familiar as a unibody car. “We went through the same thing,” he said. 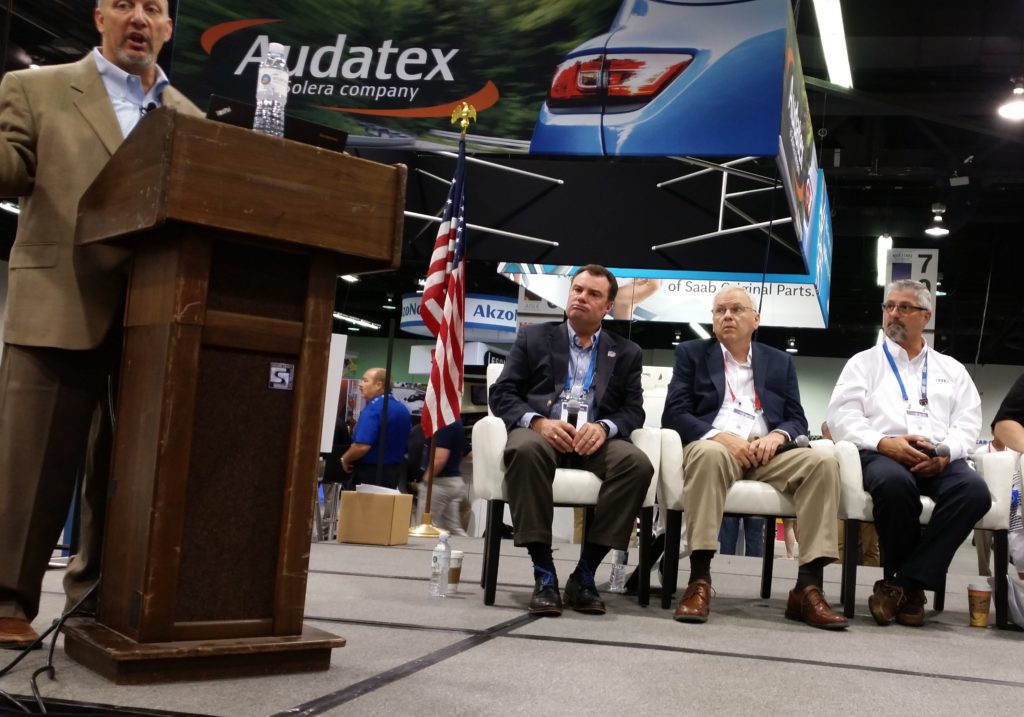 It also might help when insurers begin to appropriately price the severity of collisions on scan-needing vehicles, Anderson suggested. (Though there’s also a reduction in frequency that should eventually lower premiums, Thatcham and Poirier suggested. “Maybe not in my lifetime,” Poirier joked, as long as tech-heavy cars get hit by cars like his wife’s 1999 Durango.)

“I’ve never been more involved from this year forward on educating our underwriting people and our pricing people,” Poirier said.

Premiums will reflect such procedures, Evans agreed. “It just bears out,” he said.