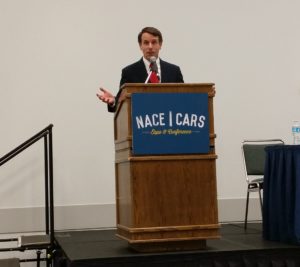 California has revamped its proposed standard for insurers who wish to rely on auto body shop labor rate surveys, expanding the “geographic area” used to calculate an area’s “prevailing rate” and adding new rates for shops working on composites.

The new regulation might take effect in as few as 15 days from the agency’s release of the document Friday while a final round of written public comment is solicited through 5:30 p.m. Oct. 11. Find out how to leave comments here or email Damon.Diederich@insurance.ca.gov

Democratic Insurance Commissioner Dave Jones’s administration this spring proposed a standardized labor rate survey form and a precisely defined method of calculating a geographic area following allegations insurers had been underpaying shops and customers’ claims using ridiculously flawed data. Carriers wouldn’t have to use Jones’ form, or even do a survey — but those who elected to follow Jones’ template and rules could receive a “rebuttable presumption” they were acting in good faith on labor rates.

“Currently, the various insurers determine a geographic area in several ways, including but not limited to United States Postal Service (USPS) Zip Code areas, city, counties, multiple counties, and some highly irregular and customized ‘markets’ or ‘zones’ which the insurer creates,” the DOI wrote in the spring. “The Department’s experience is that some of the geographic areas used by insurers in surveys result in artificially inaccurate, unreliable, and unreasonably low labor rates that are not representative of the market. For example, in one instance, an insurer used its insurance adjusters’ territories as the geographic areas for its labor rate survey, which may have been convenient for the insurer, but which also had no relationship to the actual market areas where shops were located. The result is a significant range in labor rates used by insurers for the same insured, claimant, or repair shop. A claimant should not be paid significantly differently depending on which insurance company is paying the claim. In order to achieve greater consistency and reliability in the Standardized Labor Rate Survey, the Department finds it necessary to define geographic area.” (Emphasis added.)

Jones’ Department of Insurance indicated it planned to add 45 examples of complaints to the rulemaking file, which ought to make for interesting reading.

Collision repair professionals seeking advice on pricing auto body shop work should check out “You Charge ‘How Much’ Per Hour?!” with Tim Ronak of AkzoNobel Automotive and Aerospace Coatings, “Who Pays For What? Interpreting the results for your business” with Michael Anderson of Collision Advice. The four sessions are part of the Society of Collision Repair Specialists’ Repairer Driven Education Series from Nov. 1-4 during SEMA. Register here.

The state expects it’ll cost an insurer about $1.17 million the first year to both comply with the new rules and pay $1.15 million more to collision repairers. Some or all of that $20,000 administrative cost difference should fall in the years when insurers can adjust their findings by the California inflation rate.

Besides the Golden State’s importance to the national insurance and collision repair industries, what California does here should matter to collision repairers and regulators across the country. As Jones’ administration has done virtually all of the legwork for any other state considering such a move, the explanations offer some thought-provoking ideas and a possible solution for some questions being debated by today’s collision repair industry.

Here’s some of the changes; see the full proposal here.

The earlier version of the proposed regulation mandated an insurer could for a claim pay either the repairer’s door rate — the rate charged to out-of-pocket customers — or the higher of the average or “rate at or below which a simple majority of surveyed shops (in a market) charge.” It’s their call. However, nothing stops a shop from negotiating a higher or lower (such as a direct repair program) rate with a carrier, but shops must respond to the survey with their pure posted rate — and not a lower DRP rate.

The new version only offers a single option for calculating the prevailing rate: the “rate at or below which a simple majority of surveyed shops charge.” The option of using the average has been eliminated.

Insurers who didn’t want to mess with surveys every year can just apply an inflation calculation to the data once every 28 months — but the new version of the regulation also lets them apply a deflation calculation. Under the old version, the insurer was out of luck if California prices as a whole decreased — it couldn’t reduce the prevailing rate even if everything in California got cheaper.

“Labor rates and prevailing rates shall be increased or decreased commensurately with any increase or decrease in the California CPI-U, the new regulation states. “However, if at the time the labor rate is to be adjusted the Monthly (All Items) Consumer Price Index for All Urban Consumers for California is at the same level it was at the time the oldest labor rate survey data used in the survey was collected, no adjustment shall be made.”

Market area: Expanded by a mile

The previous version of the regulation defined a “geographic area” used to calculate that “prevailing rate” as the shop in question and the nearest five qualified shops which took the labor rate survey. Or the nearest six, if that shop didn’t respond to the poll. Proximity is calculated by geocoding software which can get location down to a thousandth of a mile, or less than six feet.

The new regulation now calls those six shops the “core area” and lets insurers add a radius that extends out a mile from the farthest of those six. Every shop that falls into both of those areas counts when calculating the prevailing rate. It looks insanely complicated when the DOI tries to articulate it in legalese, but it’s really not too hard to understand thanks to a diagram they mercifully gave us all.

An insurer is on the hook to pay Shop S1 either S1’s door rate or a market rate calculated using the data from all the surveyed, qualified shops in the “geographic area” of the two circles. (Or a prenegotiated rate, if the insurer and shop have one.)

For more on why the state opted for these kind of calculations instead of ZIP Codes, census areas, or other measurements to figure out a market, see our discussion this spring.

California still doesn’t include a labor rate for luxury cars per se, but it did make a few concessions to shops which fix composite luxury models and “supercars.” As composites could trickle into the mainstream sooner than some shops would anticipate, the addition ought to help all body shops.

The new labor rate survey asks shops for their rates on carbon fiber and fiberglass. This might miss a few categories of composite materials, but it doesn’t leave shops who’ve invested in training and tooling to perform carbon fiber repairs hanging.

The agency still doesn’t distinguish between aluminum structural and aluminum panel work.  Nor does it wade into the issue of an hourly paint and materials rate versus just itemizing what supplies were used.

“The new survey clarifies that a Qualified Auto Body Repair Shop means an auto body repair shop that is licensed by the Bureau of Automotive Repair as an auto body and/or paint shop” instead of  “licensed by the Bureau of Automotive Repair to perform auto body collision repairs.” This might just be dotting Is and crossing Ts for regulatory semantics, but it seems like some repairers handling non-crash damage or body work might benefit.

Both these body and/or paint shops must meet certain criteria —  which still relies on a 2005 Collision Industry Conference “Class A” definition and what appears to be 1997 state law; no changes. While the rules do help ensure that the guy in the parking lot “fixing” dents doesn’t count as a shop, it doesn’t ensure that a shop responding with, say, an aluminum rate has any capability to repair the metal.

Of course, a different agency regulates shops in California, but the DOI’s proposal still sounds pretty inadequate for the purposes of a survey-worthy shop — if not now, then soon.

The rates charged and DRP affiliation of each shop surveyed by each insurer will no longer be public record, though the names of the shops and the prevailing rates will remain as such.

Though the CDI will retain that data for its own internal auditing of the results, the lack of disclosure of what is supposed to be a posted rate and a DRP affiliation insurers like State Farm already advertise is troubling.

While shops are paranoid about discussing rates for fear of being accused of price-fixing, answering a third-party, state-vetted survey with a posted rate seems about as far from collusion and under-the-table dealing as one could get. So the absence means there’s no public check on the math used to arrive at the prevailing rate — one has to hope the CDI keeps tabs on it after Jones leaves office. The DRP affiliation is a little more understandable given NDAs in contracts, but given how publicly some insurers and shops promote those networks, why not do so here to make public watchdogging easier?

Clarification: Carriers wouldn’t have to use the CDI’s form, or even do a survey — but those who elected to follow the proposed template and rules could receive a “rebuttable presumption” they were acting in good faith on labor rates. The article has been updated to reflect this.

An example of a geographic area for the purposes of the California labor rate survey regulation. (Provided by California Department of Insurance)