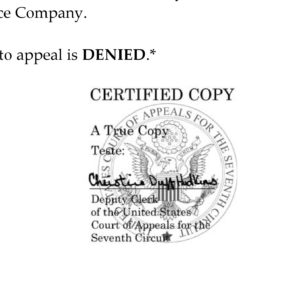 The Seventh Circuit last week denied State Farm’s petition to appeal class-action status for the policyholders plaintiffs allege were affected by the nonrecusal of a judge the insurer had helped elect before a decision overturning a $1.05 billion aftermarket parts ruling.

The appellate court offered no explanation for its 2-1 decision. Chief Judge Diane Wood and Ilana Rovner both supported denying the petition, while Judge Diane Sykes would have granted the appeal petition.

The case been stayed in the Southern District while the Seventh Circuit considered the appeal, and it’s now back in business though no longer scheduled for a January 2017 trial.

The original class-action certification ruling in September by Southern District of Illinois Judge David Herndon and the appellate court ruling Dec. 8 doesn’t mean State Farm has lost the case, but it raises the stakes should it and the other defendants fail.

The new class is everyone who twice won a $1.05 billion lawsuit for State Farm’s use of non-OEM collision repair parts but who subsequently lost an Illinois Supreme Court decision following the election of allegedly State Farm-backed Judge Lloyd Karmeier. Karmier should have recused himself, argued the plaintiffs, who seek new damages of $7.6 billion for the class. (Herndon noted that State Farm and the other defendants disagree with that amount.)

U.S. Southern District of Illinois Judge David R. Herndon in September approved class-action certification to what could be more than 4 million current and policyholders in Hale et al v. State Farm et al. All would be eligible for a piece of the potential billions of dollars in damages if the case proved successful. (At the very least, you’d think they’d make the $1.05 billion back.)

If you’re part of this group, you’re (again) a plaintiff:

All persons in the United States, except those residing in Arkansas and Tennessee, who, between July 28, 1987, and February 24, 1998, (1) were insured by a vehicle casualty insurance policy issued by Defendant State Farm and (2) made a claim for vehicle repairs pursuant to their policy and had non-factory authorized and/or non-OEM (Original Equipment Manufacturer) ‘crash parts’ installed on their vehicles or else received monetary compensation determined in relation to the cost of such parts.

The new Hale lawsuit argues that Karmeier (who is not a defendant but will be deposed) should have recused himself or been prevented from hearing the case, as State Farm allegedly played a huge role in his campaign and contributed more than $4 million of Karmeier’s $4.8 million war chest. State Farm denies those allegations.

Karmeier denies any bias, Saint Louis Public Radio reported in a comprehensive 2015 piece on the case, part of which first appeared in Illinois Issues. But that might not matter. In 2009, the U.S. Supreme Court threw out a West Virginia case “involving a party’s political and financial influence to elect a justice whose vote it sought for its appeal,” according to the Hale suit.

It was a rough couple of days for State Farm. On Dec. 6, the U.S. Supreme Court upheld a ruling against it in favor of two former claims adjusters who said “petitioner instructed them and other adjusters to misclassify wind damage as flood damage in order to shift petitioner’s insurance liability to the Government” following Hurricane Katrina, according to the unanimous decision by Justice Anthony Kennedy. State Farm had argued in 2011 that the adjusters’ former attorney had violated a seal five years prior, and therefore the entire case should be dismissed.

“The court decided against dismissal. Petitioner did not request some lesser sanction. The case went to trial, resulting in a victory for respondents on what the Court of Appeals (which also upheld denying the dismissal motion) referred to as a ‘bellwether’ claim regarding a single damaged home,” Kennedy wrote.

According to the Wall Street Journal, the adjusters received $2.9 million in attorneys fees and $227,000 in damages, and “The case now returns to trial court for further litigation that could expose State Farm to additional damages for fraud in processing claims in the region.”