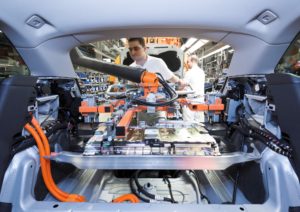 Repair procedures aren’t just for the body folks. Even the paint department can discover vehicle-specific considerations.

Collision Advice CEO Mike Anderson provided a great example of this on a Guild 21 call Thursday during a general call for the industry to research repair procedures, scanning and calibration. (See slides.)

Audi high voltage vehicles are equipped with a powerful lithium-ion battery. This type of battery is functional only up to 55 °C (131 °F). The cells can get damaged when the temperature goes about 70 °C (158 °F).

In order not to exceed 70 °C (158 °F), do not leave an Audi high voltage vehicles longer than 60 minutes in the paint drying cabin.

If the materials being used for the repair need a drying time longer than 60 minutes, then find an alternative method to dry them such as infrared heat. Refer to Audi Paint Manual. (Anderson’s Audi materials referenced the 2008 Q5, a reference to the design generation itself, as the car didn’t reach the U.S. until 2009. It offered a hybrid starting with the 2013 model year.)

It’s likely that other OEMs impose the same restrictions on painters, for heat above a certain point will affect lithium-battery life.  For example, the 2016 Nissan Leaf manual also specifically warns owners not to get their batteries too hot in a paint booth:

“In the event of an accident that requires body repair and painting, the vehicle should be delivered to a NISSAN certified LEAF dealer to have the Li-ion battery pack and high voltage parts such as the inverter, including the wiring harness, removed prior to painting. Li-ion battery packs exposed to heat in the paint booth will experience capacity loss,” Nissan wrote. “Damaged Li-ion battery packs may also pose safety risks to untrained mechanics and repair personnel.”

“If you’re fixing some of these electric vehicles, are you actually researching what some of the paint precautions are on these vehicles, because this is just as important as scanning the vehicle,” Anderson said Thursday.

It seems as though such considerations could also affect shops in warmer climates which store vehicles outside for extended periods of time. According to Dr. Mikael Cugnet, who presented research on battery life in 2013 to the 245th National Meeting & Exposition of the American Chemical Society, battery performance is affected once the mercury crosses 86 Fahrenheit (30 Celsius).

“The higher the temperature, the lower the battery service life,” Cugnet said, according to an ACS news release. “A temperature above 86 degrees F affects the battery pack performance instantly and even permanently if it lasts many months like in Middle East countries.”

A fully charged battery is more prone to power loss above 86 degrees than a partially charged one, according to Cugnet.

Otherwise, batteries hang in there pretty well: “The battery pack could be used during a quite reasonable period of time ranging from 5 to 20 years depending on many factors,” Cugnet said, according to the ACS. “That’s good news when you consider that some estimates put the average life expectancy of a new car at about eight years.”

A  2011 Journal of the Electrochemical Society literature summary describes some other scientific research on the issue, if anyone’s interested. The topic has obviously received further study since (Cugnet’s 2013 report, for one) — further reinforcing why repair procedures need to be checked every time in case an OEM learned something new and adjusted the instructions accordingly.

As the Nissan Leaf example indicates, this issue isn’t limited to high-end cars like Audi — and greater acceptance of electric cars by the buying public will bring even more “EVs” into shops.

“Electric vehicles will probably become the diesel of the future,” Anderson said Thursday, citing conversation with OEMs as the basis for this conclusion.

We saw more skepticism from the automotive experts at the 2016 Megatrends in Detroit — but at that time, Tesla hadn’t racked up 373,000 global pre-orders for the Model 3 and GM had just announced what would ultimately prove the Motor Trend Car of the Year-winning Chevrolet Bolt.

Another fun battery tidbit: Audi requires shops to “quarantine” and watch the battery on the Q5 for at least five days, checking the battery’s temperature twice a day and telling the “high voltage expert” what’s going on, according to a slide Anderson presented. He said he likes to ask shops if they did this. Correction: An earlier version of this article listed an incorrect source of the Q5 battery paint booth restrictions. Volkswagen Canada collision program manager Scott Wideman brought it to Anderson’s attention for the Canadian Collision Industry Forum. The article has since been updated to reflect this.

A high-voltage battery is installed in a Audi Q5 hybrid in 2012. (Provided by Audi)

Audi requires shops to “quarantine” and watch the battery on some of the prior-generation Q5s  for at least five days, checking the battery’s temperature twice a day and telling the “high voltage expert” what’s going on, according to a slide Mike Anderson of Collision Advice presented to a Guild 21 call in March 2017.  (Audi repair instructions provided by Collision Advice)