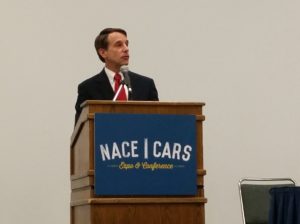 Insurers fear that the California Department of Insurance’s production of a suggested but not required method for conducting auto body labor rate surveys would wind up being the only format accepted by the department, a legislative analyst wrote in April.

“The current DOI regulation governing labor rate surveys is not couched as a mandate,” California Assembly Insurance Committee analyst Mark Rakich wrote to the panel in April. “Instead, the regulation proposes a safe harbor whereby an insurer that complies with the regulation’s labor rate survey requirements is entitled to a rebuttable presumption that it “has attempted in good faith to effectuate a fair and equitable: 1) labor rate component of a claim settlement, or 2) adjustment of the labor rate component of a written estimate provided by a claimant.” The DOI took this approach for a very good reason – in 2006, OAL rejected the DOI’s proposed labor rate regulations that mandated a specific methodology to be used in determining a prevailing labor rate in an area.

“Insurers’ concerns with the safe harbor approach is that it is common regulatory legerdemain to couch de facto mandates as a safe harbor. This occurs because, having stated what the agency finds acceptable, anything else is functionally unacceptable. Insurers fear that the DOI’s labor rate regulation could operate in just this manner.”

As allegedly shaky and self-serving insurer survey methodology prompted the guidance from the CDI in the first place, this might not be such a bad thing from a body shop and consumer perspective.

“Currently, the various insurers determine a geographic area in several ways, including but not limited to United States Postal Service (USPS) Zip Code areas, city, counties, multiple counties, and some highly irregular and customized ‘markets’ or ‘zones’ which the insurer creates,” the DOI wrote in April 2016 during the development of the regulations. “The Department’s experience is that some of the geographic areas used by insurers in surveys result in artificially inaccurate, unreliable, and unreasonably low labor rates that are not representative of the market. For example, in one instance, an insurer used its insurance adjusters’ territories as the geographic areas for its labor rate survey, which may have been convenient for the insurer, but which also had no relationship to the actual market areas where shops were located. The result is a significant range in labor rates used by insurers for the same insured, claimant, or repair shop. A claimant should not be paid significantly differently depending on which insurance company is paying the claim. In order to achieve greater consistency and reliability in the Standardized Labor Rate Survey, the Department finds it necessary to define geographic area.”

The CDI’s regulations took effect Feb. 28, 2017. The new rules don’t require insurers to complete labor rate surveys at all, but provide direction for those who do.

The CDI’s suggested survey template and survey methodology defines a market area as a region extending a mile out from a six-shop cluster of survey respondents closest to or including the shop whose rates are being compared to the average (assuming the shop completed the survey).

As Rakich noted, insurer who used that definition of a market could receive a “rebuttable presumption” they were acting in good faith on labor rates, though the carriers also could try another market definition and see what the CDI felt as well.

The suggested survey from the CDI asks shops about  “Aluminum,” “Auto Body/Sheet Metal,” “Carbon Fiber,” “Fiberglass,” “Frame,” “Mechanical,” “Refinish” and “Structural Labor” rates. Again, carriers aren’t required to use the CDI’s survey form or questions, but those who do will have a “rebuttable presumption” of good faith.

Insurers who don’t want to mess with surveys every year can just apply an inflation or deflation calculation to the data once every 28 months.

Again, insurers are free to use other survey formats. And that’s where things get tricky.

If the CDI’s suggested survey methodology was the only thing regulators ever let pass the good faith test, the CDI would arguably not be playing fair and validating the insurer fears described by Rakich. But if the agency becomes overly permissive in what it considers a good faith effort, body shops and consumers could wind up back at insurers being able to play fast and loose with the concept of a labor rate survey.

Thus, both shops and insurers should note with keen interest that the CDI has received other types of labor rate surveys since the law took effect.

“It bears noting, however, that in the past year DOI has, in fact, accepted other methodologies,” Rakich wrote in the April 2018 analysis. “… With respect to size of geographic areas, the 80 Assembly district option … compares favorably from a repair shop perspective to many of the surveys actually accepted by DOI, where the number of geographic areas used by insurers typically ranges from the high 20’s to the high 30’s.”

As the CDI was critical of large market areas during the rulemaking, we emailed their press office seeking more details on these “accepted” markets and methods.

The agency explained in an email that it doesn’t in general pass judgement on any of the surveys submitted by carriers since the regulations took effect. It only scrutinizes the data if someone files a complaint.

“The CDI has not and currently does not approve labor rate surveys,” the CDI wrote. “Each labor rate survey is evaluated if a public complaint is filed that alleges an insurer has unfairly capped or limited a labor rate of the repair shop chosen by the claimant for a collision repair estimate.   Unless the insurer conducted a Standardized Auto Body Labor Rate Survey pursuant to the 2017 regulations, there is no set geographic area, survey format, or specific method that is in itself acceptable.  It depends on the totality of the survey, how each method impacts other methods, and whether the prevailing rate results in a fair and equitable settlement.  For example, one insurer may use a certain geographic area, but other components of the survey (i.e. sample size, use of discounted rates, old data, etc) may be flawed.  Another survey may have reasonable methods for the other components of the survey, but may have a flawed or biased geographic area.”

Asked about what other methodologies were approved, the agency wrote, “For the same reasons described above, CDI has not accepted other specified methodologies.  CDI must look to whether all the methods used combined result in a fair and equitable labor rate. ”

As both we and the California Autobody Association have observed, defining a market as one of California 80 Assembly districts results in some unrealistic markets. Asked about Rakich’s comment that insurers have successfully submitted 20- and 30-market divisions of the sate, the CDI wrote: