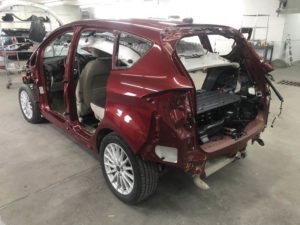 An alleged more than $10,000 short-pay by GEICO led a Kirksville, Mo.-based shop owner to sue the at-fault driver and vehicle owner on behalf of his customer.

Collision Company owner Brad Buck, who filed the lawsuit under an assignment of proceeds for his customer,  had his day in Adair County Associate Circuit Court on Thursday.

He said an attorney for GEICO — who had to represent the defendants under the policy and would ultimately be responsible for any judgment in favor of the plaintiff/shop — questioned him about his labor rate, practice of disassembling vehicles and why refinish work would be needed on the opposite quarter panel.

However, she never actually challenged many of the other line items the insurer refused to pay or had modified, Buck said. He said he came to court armed with the relevant repair procedures supporting those elements of his estimate but ultimately didn’t have to use them during his hours on the stand.

“Never once did that come up,” he said.

A 2006 Chevrolet Cobalt driven by another party with permission from the Cobalt’s owner rear-ended Buck’s customer’s 2016 Ford C-MAX on Oct. 31, 2017.

GEICO agreed their policyholder was at fault and wrote an estimate for the $3,850.22 in damage they could see, according to Buck.

“I knew that was a joke when she handed me that” Buck said.

The customer took the C-MAX to the Collision Company, who disassembled the vehicle and concluded the actual repair cost was $13,409.66, according to Buck and the lawsuit.

“We have a pretty thorough blueprint process,” Buck said Friday. 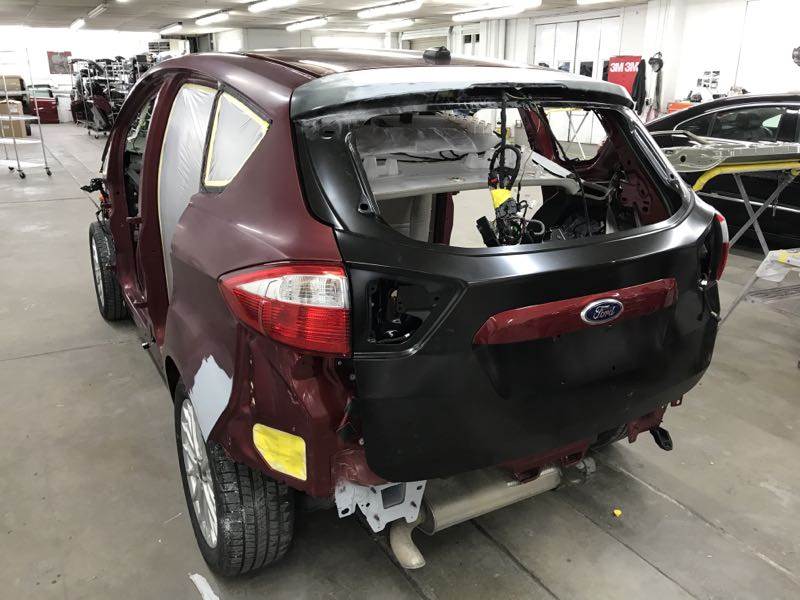 Buck wrote in an email that he provided that estimate, OEM documentation, photos, a “Notification of Repairs” and a “Notice of Deficiency in Insurance Appraisal” to GEICO.

The GEICO adjuster and their supervisor, who appeared as an expert witness on behalf of GEICO in the small-claims case, “briefly inspected the vehicle,” according to Buck. They raised the GEICO estimate to $6,338.36, but went no further, he said.

“We then stored the vehicle for several weeks while we attempted to resolve the short pay, eventually, GEICO stopped payment on the customers rental and we decided to complete the repairs and seek remedies in a court of law,” Buck wrote in an email. The final bill was $16,753.85, leading to the $10,415.49 lawsuit.

The supervisor appeared as an expert witness on behalf of GEICO. (According to LinkedIn, his resume prior to GEICO includes four years of work as a customer sales rep at Safelite and two years in human resources for DHL subsidiary Exel and IntelliSource.)

Buck said the supervisor prior to the visit “was just baffled” that the vehicle was disassembled without checking with the insurer and couldn’t figure why the Collision Company did that. Buck recalled the supervisor saying his GEICO ARX direct repair program shop “would never” have done so, and “‘no other shop would do this.'”

That’s irrelevant, Buck said Friday, giving us the example that just because a lot of people were on the sex offender registry didn’t make it OK to be one.

Buck said GEICO’s attorney challenged the notion of disassembling a vehicle without checking with a carrier, asking him who authorized the disassembly. The customer, Buck replied.

“‘I see,'” the attorney said, according to Buck.

She asked if other shops he worked for didn’t tell the insurer before disassembling the vehicle. He said no, they used the “‘traditional guessing way'” which was “‘wildly inefficient'” and leads to multiple supplements: Start the repair, and then file supplements each time new damage is uncovered. 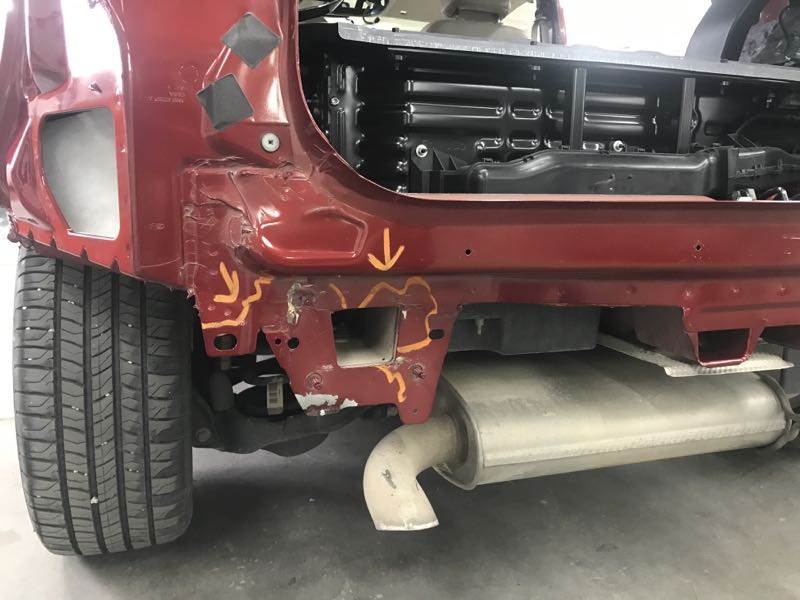 Buck said his shop never filed a supplement after producing its comprehensive estimate — until GEICO refused to pay and the shop began to assess storage and administrative costs.

He said he pointed out that many shops do 100 percent disassembly, and while it might be a new concept in rural Missouri, many repairers in the industry advocate that practice, such as Collision Advice CEO Mike Anderson.

The attorney also questioned why the shop was performing refinishing work on the opposite side’s quarter panel and about its process.

Why were the panels but not the doors refinished to match the liftgate? she asked.

“‘I don’t think you understand the process,'” Buck said he replied.

PPG, the paint manufacturer, said to find a blendable match for the car’s three-stage, difficult-to-match Ruby Red color, according to Buck. Doing the work correctly meant the doors being removed and other items like one-time-use glass being removed.

GEICO had already agreed to paint the quarter panel affected by the collision, but its estimate neglected to include the roof rail, door aperture, A-pillar and B-pillar which all needed clearcoat, Buck said. Doing the work on just one side meant the left side would match well, but the right side wouldn’t, he said. 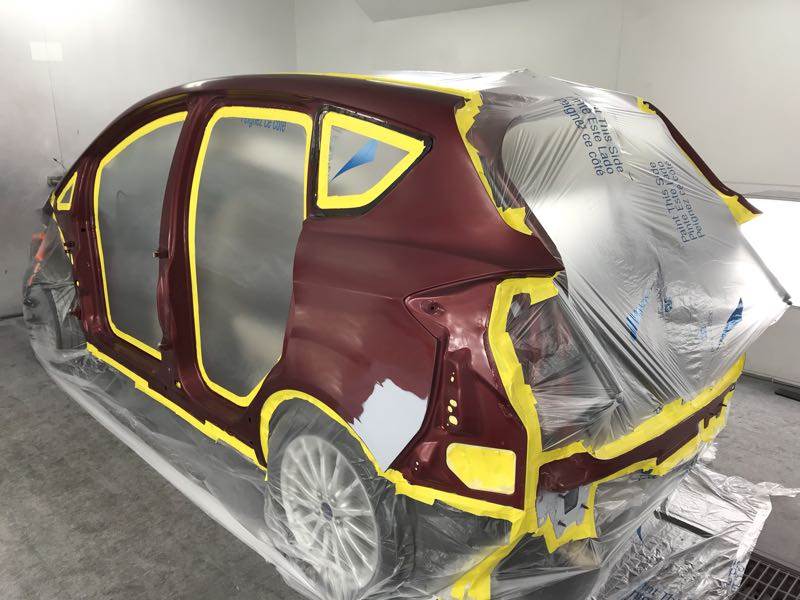 Buck said the attorney said, “‘You can’t look at both sides at the same time,'” and he said he didn’t know how to respond to that. The customer was certainly going to look at the individual sides of the vehicle at some point and notice, and the position statement on clearcoat stated the work had to be done, Buck said.

The attorney then asked if he could have just blended the clearcoat, and Buck said that was an money-saving repair but not one warrantied by the paint manufacturer, according to Buck.

The lengthy cross-examination by GEICO and the dispute produced a few other interesting highlights, based on Buck’s account. Among them:

• “The stuff they didn’t pay for is baffling,” Buck said. He noted that GEICO has on subsequent claims been paying for procedures rejected on the lawsuit vehicle, such as washing and buffing the vehicle and feather, prime and block.

• The attorney spent time digging around his labor rates of $62/hour for body and paint work, Buck said. Buck said he figured it out in consultation with his accountants based on items like utilities, overhead, wages and benefits.

Buck noted that GEICO paid the $62/hour. He said the carrier’s attorney challenged this, and he pointed out the insurer’s estimate included a labor rate of $55 an hour plus a line item for a $7/hour concession: “‘That’s paying my rate.'”

• The attorney asked Buck if he considered GEICO to be the customer.

No, he said. The vehicle owner was the customer. “‘They’re reimbursing her for the bill.'”

Featured images: An alleged more than $10,000 short-pay by GEICO on this 2016 Ford C-MAX led a Kirksville, Mo.-based shop owner to sue the at-fault driver and vehicle owner on behalf of his customer. (Provided by the Collision Center)