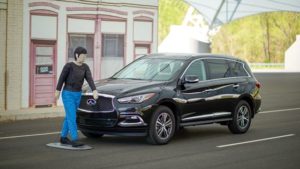 The new protocol will add another method for consumers and insurers to evaluate how safe a vehicle is and potentially another thing shops will have to restore and calibrate.

A third of all 2019 vehicles have standard autobraking that can also detect pedestrians, and another third offer it as an option.

The test results won’t play into the IIHS’ Top Safety Pick and Top Safety Pick+ ratings in 2019. The IIHS on Friday said it was still evaluating its 2020 criteria and couldn’t say whether success on the pedestrian advanced driver assistance system would be needed to win the top IIHS prizes in two years.

2019 IIHS rules will demand a car achieve a “Good” rating in passenger-side small-overlap testing to achieve Top Safety Pick+, up from an “Acceptable” rating minimum this year. A vehicle won’t be able to get the silver-medal Top Safety Pick rating without at least an “Acceptable” — up from no requirement at all in 2018.

The IIHS’ Highway Loss Data Institute in May reported that Subaru EyeSight (which has pedestrian detection with autobrake) cut Subaru-versus-pedestrian claims by 35 percent. (33 percent on the first-generation system, 41 percent with the second-gen system debuting as early as the 2015 model year.)

In 2011, the IIHS projected based on 2005-09 calendar year data that pedestrian detection could have mitigated or stopped up to 65 percent of vehicle-pedestrian crashes and 58 percent of pedestrian deaths “in the three most common crash configurations.”

Other advanced driver assistance systems meant to prevent crashes also have the benefit of protecting another vehicle on the road as well as their own car — I don’t hit you, and we both win. But the pedestrian rating is interesting in that its main function is arguably protecting someone other than the vehicle’s occupants.

It seems to represent a progression in safety tech:

Under all these scenarios, the responsibility for the vehicle’s operation still lies with its driver — it’s not until higher level of autonomy that the OEM gives the motorist the green light to space out. But if the vehicle wasn’t given back to the owner in good working order, there might be some blame to spread to the aftermarket.

P&L Consultants co-owner Larry Montanez and Lange Technical Services President Jeff Lange in a May 2017 Hammer & Dolly column described an example of a shop being blamed for a crash despite the customer arguably having responsibility. According to Lange and Montanez:

According to the National Highway Traffic Safety Administration, which mandated rearview cameras as of this year, the view from the device still isn’t the same as using your eyes.

“It’s important to remember that rearview video systems are not a replacement for mirrors or turning around to look; rather, they’re an added safety tool for revealing hidden dangers,” the agency wrote.

The 2014 Impala’s owner’s manual also suggests that drivers might not be able to rely solely on the camera.

“The RVC system does not display children, pedestrians, bicyclists, animals, or any other object located outside the camera’s field of view, below the bumper, or under the vehicle,” Chevrolet wrote. “Perceived distances may be different from actual distances. Do not back the vehicle using only the RVC screen, during longer, higher speed backing maneuvers, or where there could be cross traffic. Failure to use proper care before backing may result in injury, death, or vehicle damage. Always check behind and around the vehicle before backing.”

Yet the shop, not the driver, still ended up being held responsible for all the damage, according to the column.

Theoretically, a third party injured by a vehicle (or their heirs, if they’re killed) under any of the three technical scenarios described above could sue a repairer for compromising the relevant safety tech, arguing that the injury wouldn’t have occurred if the system was working correctly. But as it becomes more obvious to the public that the car is supposed to be preventing crashes itself, will third-party scrutiny be more likely to fall upon the repairer?

We’d bet it’d be unlikely that a third-party victim of a crash would even think to sue the guy who fixed the at-fault driver’s electronic stability control or antilock brakes, or even that the at-fault driver would think to pass the buck to the repairer for the collision. It’s just not as obvious that the car was also supposed to be watching your back, and it’s harder to prove that the car dropped the ball.

But with something like autobraking or pedestrian detection, everyone who’s seen a car commercial knows the vehicle’s supposed to be a second pair of eyes on the road. In the same vein as the Impala example, are some combination of the victim, the driver, their attorneys or their insurers now more likely to inquire why the car didn’t attempt to react and seek redress from the repairer?

Shops’ actions affect more than just their customers — and could in theory draw lawsuits from more than their customers. Autobraking and other modern ADAS already kicked this third-party responsibility up a notch, and pedestrian detection truly expands a repairer’s “customer base” to third parties they’ve never met. (Let’s face it — the vehicle occupants aren’t really the ones needing the protection in a pedestrian collision.) It’s far beyond “We didn’t bolt the wheel on tight enough, it fell off, and someone else couldn’t help but hit the car”; it’s now “We prevented the car from actively trying to protect someone else.”

The IIHS tests will score vehicles’ pedestrian autobraking as basic, advanced or superior based on how they do in three scenarios:

“The test with the small child dummy is the toughest,” IIHS active safety testing manager David Aylor said in a statement. “The dummy is hidden by a car and an SUV parked on the right side of the road as the test vehicle approaches, so there’s no clear sight line for the cameras — or driver — until the dummy emerges in the vehicle’s path.”

Featured images: The Insurance Institute for Highway Safety will in 2019 begin to test vehicles’ pedestrian autobraking. (Provided by IIHS)