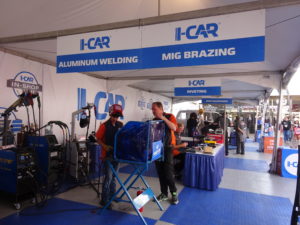 I-CAR said Tuesday nearly 7,000 auto body repair technicians have to date received at least one welding credential through their MSO employer thanks to a self-delivery licensing program introduced in 2016.

The program permits collision repair companies to deliver the organization’s three welding courses and other hands-on curriculum to their own staff. I-CAR piloted the option with a single MSO between 2016-17.

Last year, the program moved out of the pilot phase and saw three MSOs licensing the self-delivery capability. One decided to cease the program this year over the expense. The other three plan to participate again but haven’t yet signed a 2019 contract, according to I-CAR. (Self-delivery licensing is renewed annually.)

I-CAR now will expand the option to equipment suppliers, who would be able to bundle the I-CAR welding certification process into the training they’d be delivering to clients naturally. Talks are under way with three suppliers, though no deals have been signed yet.

The program will not extend to the more stringent Jaguar Land Rover welding certification I-CAR manages for that automaker’s auto body repair network, nor will it apply to virtual or online classes.

A company certifying its own staff or a vendor evaluating its customer base raises “fox guarding the henhouse” concerns.

But I-CAR said it has worked out a system of unannounced audits of the self-delivered classes, a quality control measure it has introduced on the traditional I-CAR instructors as well. More on that here.

Licensees must provide a schedule of their classes for this purpose, and I-CAR will cross-reference credential dates against it to ensure nobody’s trying to circumvent the possibility of being audited.

Notte said I-CAR had reached the point where it had “so much business,” particularly after State Farm’s 2017 mandate that all direct repair program shops receive all three I-CAR welding certifications.

“That really changed our view” on delivery, Notte said.

Notte recalled that the media had highlighted some “pretty poor repairs” around the time he joined I-CAR in August 2015. Demand was suddenly “on fire” for courses on materials and joining to ensure quality control.

Meanwhile, No. 1 auto insurer State Farm also took notice of those reports and “what was happening in the industry with welding,” Notte said.

State Farm contacted I-CAR about requiring the welding certification trio, and “we said, ‘Of course we can,'” Notte said. However, Barrington said the timing of the insurer’s 2017 announcement “really kind of caught us off-guard.”

2017 was “unbelievably busy” for I-CAR, Notte said. Even though State Farm announced the welding mandate in April, most of its direct repair program shops waited until the second half of the year to attempt the training.

Between State Farm and a general concern of liability, the industry was training like “never seen before,” Notte said. (Notte didn’t mention it, but the John Eagle Collision case and $31.5 million verdict also came in 2017, which probably contributed to the liability awareness.)

I-CAR faced a question of how it could keep up with the demand, Notte said.

Barrington said self-delivery was the answer, and it freed up capacity for I-CAR to keep serving other repairers. I-CAR had for years already licensed curriculum self-delivery to insurers, colleges and other countries.

About 12-13 percent of the 23,500 technicians taking I-CAR welding courses in 2018 were trained in-house by their employer, Barrington said.

Notte said State Farm was fine with using self-delivery to satisfy its mandate. He said I-CAR also this year presented the program to the OEM Roundtable (after all, I-CAR welding can be a component of an OEM certification program), and the automakers thanked I-CAR for its transparency.

We asked where I-CAR saw the program going — was it a temporary stopgap to meet near-term demand, for example?

Notte said he doubted even a large MSO would dedicate the staff to meet its entire welding and hands-on demand in-house. Even a company like 1,000-shop Caliber would have too many stores and too much technician turnover to keep up, he said.

A repairer would have to either hire more staff or just pay I-CAR to handle it externally, he said, suggesting the math might favor the latter.

The ability to self-deliver isn’t limited to major MSOs. Theoretically, a smaller operation could pursue it, Barrington said.

However, from a practical basis, cost could be a concern. The “much smaller MSO” which ceased self-delivery “couldn’t maintain it,” Barrington said.

The cost of training, travel and an internal training department could make the program prohibitive for some companies, according to Barrington.

“This program is not for everyone,” she said.

Notte said the program charges a self-delivering business the same amount per technician to take the welding course as it would a company going through the traditional I-CAR channel. This keeps the playing field level.

“We don’t discount anything,” he said in a statement. “It’s important that the industry bears the cost of training equally, and that, regardless of the size of the organization, the cost remains the same.”

Notte said a self-delivering company doesn’t have to pay the cost of the instructor for those sessions, so there’s a technically a benefit there.

However, asked if this meant a self-delivering company would have a roundabout means of getting a net deal on certification, Notte said “not at all.” Front-end costs of self-delivery like those Barrington mentioned offset the savings on the courses’ instructor fees, according to Notte.

In fact, Notte said sometimes he sees the cost of self-delivery for a company and wonders why they do it.

A candidate for self-delivery could also be rejected out of a fear doing so would harm I-CAR’s ability to serve others in a market, according to Barrington.

Capacity restraints are more or less an “overriding factor,” she said. I-CAR doesn’t want to see regular live training courses cancelled because business self-certifying its own staff produced a drop in enrollment, according to Barrington.

“We have to maintain that balance,” she said.

I-CAR wants inter-industry conversation in its classes and enough classes held to preserve the opportunity for other repairers to be trained, Barrington said.

Therefore, “we don’t take all that training talent out of the industry,” Notte said.

Barrington said she’d talked to one self-delivery MSO, and its trainers were interested in picking up some part-time traditional I-CAR welding classes while on the road for their day jobs.

Asked if the contracts committed the self-certifying trainers to a certain amount of external welding courses, Barrington said no. However, she said her takeaway from the conversation with the abovementioned MSO on the topic left her with a sense that they want to be collaborative and help I-CAR.

Though franchise operations can behave much like an MSO, I-CAR has so far declined to approve franchise brands to self-deliver training to their franchisees.

The franchise’s lack of control over its franchisee shops’s equipment could make the process “kind of a waste of time,” Notte said. The instructor might show up only to find the facility’s welding gear inadequate for I-CAR’s requirement, he said. He also raised the possibility that the staff was uninformed about the training or the facility was resistant to it.

Besides, it could be moot. “They have so few trainers,” Notte said of one franchise company. “… It’s not really gonna make a dent” in the organization’s demand.