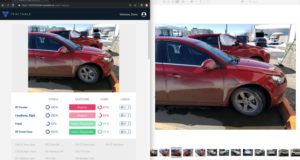 Tractable last month reported its photo estimating artificial intelligence had during a deployment flagged 22 percent of estimates as carrying questionable line items — only in many cases to meet with inaction from auto insurance adjusters.

Such anecdotes, shared during a webinar April 11, provide a sense of what the technology from the company and insurtech competitors could mean for adjusters and collision repairers seeing it in the field.

Tractable North America business development director Julie Kheyfets told the audience the technology could be used in auto claims at points involving expertise in interpreting visuals. She gave the examples of claims triage, appraisals or auditing estimates, and devoted some time to the last of these.

Kheyfets said a carrier can typically only review about 5-10 percent of collision repairers’ estimates using its own staff given the time-consuming nature of the work. However, around 20-25 percent of estimates have “errors,” she said. “It’s actually quite high,” she said.

As Tractable’s A.I. photo estimating can scrutinize an estimate “in seconds,” auditing is scalable to 100 percent of estimates, she said.

The appraiser can ignore all the lines deemed acceptable by a computer and instead spend their time on the errors, taking the review process from 20-30 minutes to five, according to Kheyfets.

However, carriers should be aware that it’s not as simple as picking an A.I., deploying it, and finding that “magically,” value arises, she said.

In one early deployment, Tractable identified a “big value opportunity” for an insurer only able to audit about 5-10 percent of estimates, Kheyfets said.

After deploying its A.I., Tractable found that appraisal standards differ across markets, insurers and even “across people” within the same carrier, according to Kheyfets.

A body shop’s estimate of seven hours on a door might be deemed egregious by a supervisor, while some appraisers would give the amount a pass based upon their own experience in a body shop or rationales like it was just a couple of hours, or “‘I know these folks,'” Kheyfets said.

Tractable now compensates for this variation within a single organization by calibrating the A.I. base model to the insurer’s standards and by working with the claims team to see the range of outcomes and the best way to deploy the software, according to Kheyfets.

Kheyfets gave an example from one early deployment. Tractable calibrated the A.I. for the client and deployed it to around 20 of its users across multiple regions, studying 10,000 claims monthly.

The tech startup saw the software flag about 22 percent of claims, but few corrections followed, Kheyfets said. After investigating the issue, Tractable realized some “pretty dramatic” differences between desk reviewers, she said.

A handful of desk reviewers were “real rock stars,” who would call up a collision repairer and get “conversions,” Kheyfets said. Another third would just “‘click through'” to reach their quota. The rest fell between the two poles, she said.

Tractable ended up making the “rock stars” champions who would identify best practices, train colleagues and spearhead the initiative, she said.

Asked how the company balanced the baseline appraisal rules given the A.I. with items like collision repairer judgments and OEM repair procedures, CEO Alex Dalyac said, “we don’t take a particular stance on that.”

Any repair-versus-replace decisions are tailored to the standards of Tractable’s client, Dalyac said. The user would select a repair/replace threshold for the computer to use when examining a photo containing damaged parts.

‘That’s what we do in practice,” he said.

The company had received strong interest from OEMs and body shops as well as insurers, Dalyac said, musing about the idea that stakeholders could someday find a way to calibrate “once and for all” and eliminate the “incessant back-and-forth.”

In other Tractable news, the company May 7 lost its motion to compel the arbitration of CCC’s lawsuit against it. Tractable has said it will appeal to the Seventh Circuit;CCC has argued that the Northern District of Illinois should continue to hear the case in the meantime as the appeal is “frivolous” and “without merit.”

CCC has alleged the startup inappropriately posed as an appraiser to probe CCC’s intellectual property and sent estimates misrepresented as from CCC.

“Tractable: How to Evaluate Photo AI in 5 minutes”

Featured image: Artificial intelligence photo estimating service Tractable on April 11, 2019, tested its software on photos submitted by participants in what the company called a live demo. This was the A.I. demo’s analysis of a 2013 Chevrolet Cruze LT1 image provided by a body shop. (Screenshot of Tractable webinar)