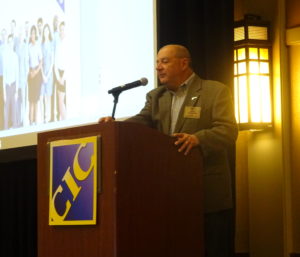 Iantorno took over at CIECA in July 2002 and was one of its founding board members in 1994.

You might not be familiar with CIECA or Iantorno, but your shop probably uses daily a product they helped make more convenient. The neutral national organization sets the standards allowing pieces of collision repair, insurance and vendor software to communicate with each other on the back end.

“During his leadership, Iantorno helped build over 200 messages and all of the codes needed to provide meaning to those messages,” CIECA wrote in a news release. “In addition, he was instrumental in the implementation of the messages to improve the operation and bottom-line of CIECA’s member organizations.”

“Where I have taken CIECA has been an accomplishment of which I am most proud,” Iantorno said in a statement. “It has been in a direction that I felt benefited the entire industry. We are now a financially-viable organization playing key roles in impacting the industry.”

“I want to thank all those who have helped me build CIECA into a successful organization, one that continues to have a great impact on the industry as a whole, with a benefit to all.”

“Having been involved in the original process of bringing Fred to the organization some 17 plus years ago, I would personally like to thank Fred on behalf of our industry for so many great years of leadership,” CIECA founder Erick Bickett (Fix Auto USA) said in a statement. “He has done a fantastic job leading the CIECA team, which includes the staff and all of the industry volunteers.”

“We are incredibly appreciative of the contributions that Fred has made to CIECA over the years and he will be truly missed,” CIECA Chairman Steve Betley (Insurance Auto Auctions) said in a statement. “He has made a tremendous impact on CIECA and the industry and we wish him all the best in his future endeavors.”

The CIECA board will search for a new executive director.

“The CIECA organization was formed in 1994 to represent equally, openly and fairly, all segments of the collision repair industry in facilitating the development of electronic commerce standards that would provide maximum low cost and efficiency,” Bickett said in a statement. “We are committed to finding a replacement who lives by the same values and has the skills to take us forward with the significant changes in electronic commerce that are in front of us.”