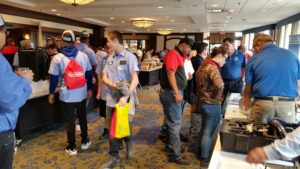 A body shop will need to pay the average production technician $54,842, and nearly one in third of staffers $70,000 or more to compete with the market, the latest Collision Repair Education Foundation and I-CAR joint survey suggests.

CREF and I-CAR conduct the study every three years. The executive summary released Thursday provides a valuable benchmark and resource for shops looking to hire and retain technicians by showing what strategies and compensation your competitors use. (It’s also a good resource for trade schools curious to know how shops view their programs and what skills shops want in graduates.)

The latest online survey was advertised to the industry and drew responses from more than 675 collision repair companies employing more than 4,500 technicians. Given that methodology, it’s possible that the results could be skewed to reflect more engaged collision repairers, who might be playing at a higher level than the true industry average shop. But even if that’s true, your shop shouldn’t dismiss the data as irrelevant — after all, you’ve still got to beat out those kind of repairers to recruit and retain techs.

The average shop grew to 15,114 square feet, way up from 13,843 square feet in 2016. At the same time, the number of collision businesses actually grew 1.6 percent between 2016 and 2019, based on CollisionWeek data cited by CREF and I-CAR. However, the percentage of small shops declined.

Taken together, this seems to suggest the average shop is getting bigger rather than newcomers rushing in with big facilities. 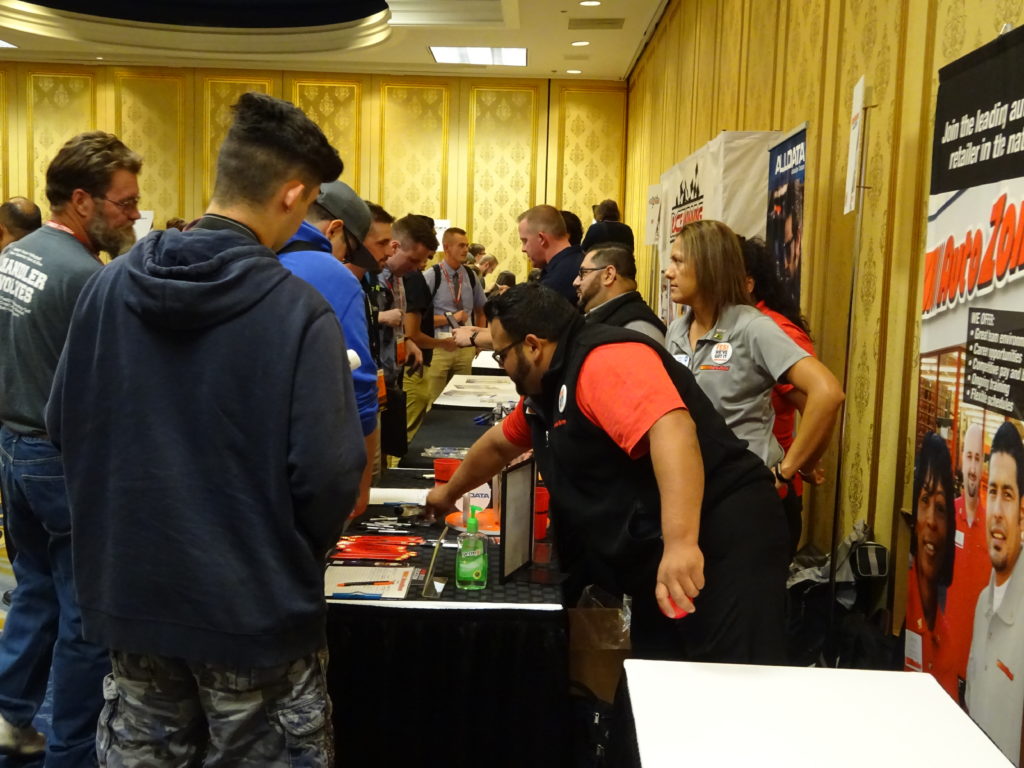 The average technician age rose to more than 41 years, up from younger than 41 back in 2016. Repairers need on average 0.7 technicians to fill open entry-level slots and 1.2 experienced techs for vacant positions. These stats were better than the 0.9 technicians worth of entry-level vacancies and 1.7 experienced technicians needed in 2016, but it still leaves repairers three warm bodies short.

“The research clearly shows the collision repair industry’s urgent need to build its skilled workforce development efforts,” CREF Chairwoman Jeanne Silver (CARSTAR Mundelein) said in a statement. “The Snapshot Survey of the Collision Industry results provides a detailed view of the challenges facing the collision industry’s workforce and clearly identifies the path, opportunities and solid financial rewards available to people seeking to train for a career in the industry. We urge the industry to help the Foundation deliver these solutions.”

About 7.1 percent of technicians left the collision industry altogether, though some of this sectorwide attrition includes retirees and employees bailing for another automotive business. But 2.8 percent appear to have taken a job completely out of the automotive sector.

But the task of filling your vacancies isn’t insurmountable. 56.4 percent of shops hired at least one entry-level tech within the past year.

On the other hand, they might be obtaining that tech from your shop. While down from 2013’s 61 percent, hiring workers from another body shop was “still the largest source of technician hiring (52%),” according to the summary.

Online job postings were seen as the most effective recruiting technique for entry-level techs. 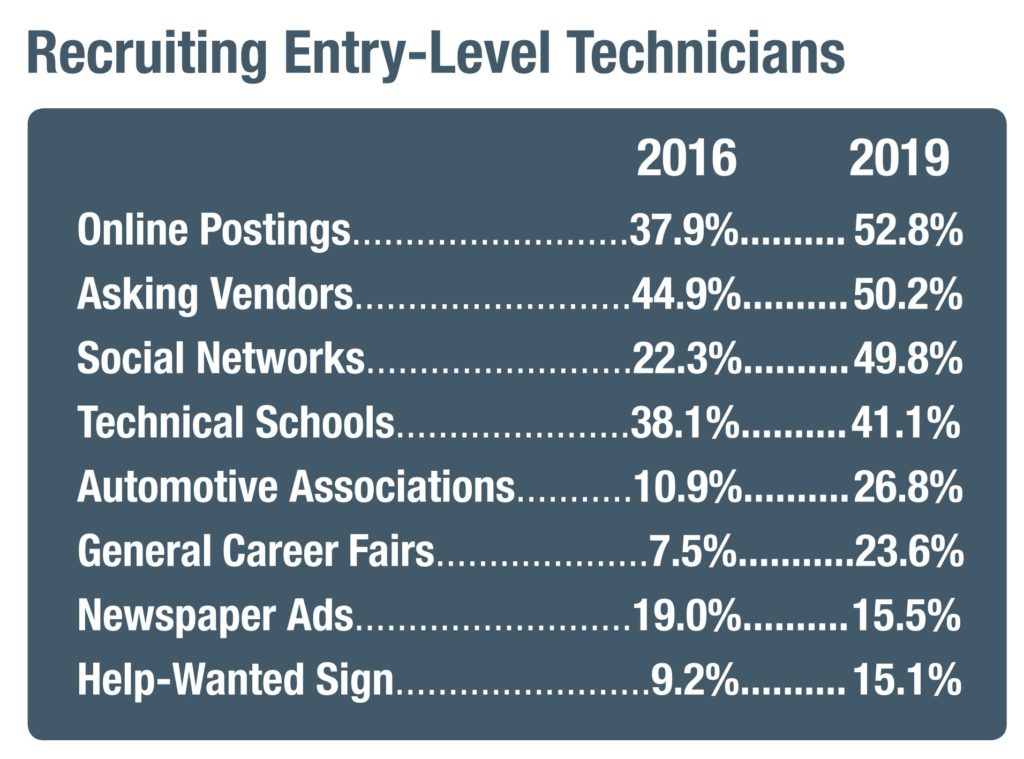 But don’t forget the personal touch. Career fairs are proving much more effective than in 2016, though that might be somewhat attributable to CREF’s aggressive job fair expansion introducing events where none had existed. (SEMA added one as well in 2017.)

As noted above, you’re going to have to pay well to keep or hire techs.

“Although there is a wide distribution, annual income tends to increase with shop sales volume. Income figures shown are for production technicians over 20 years old. 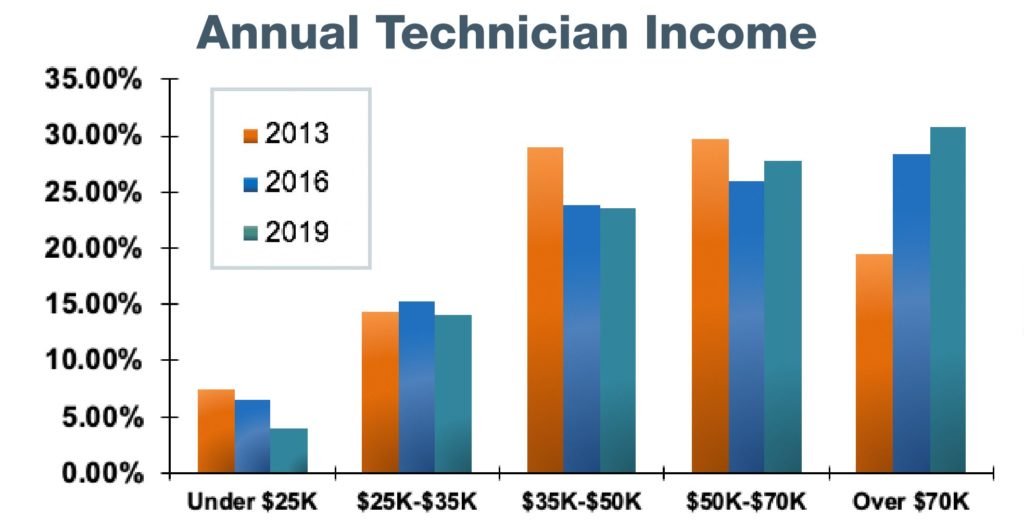 “We are pleased to again work with the Collision Repair Education Foundation in conducting this important industry survey,” I-CAR CEO John Van Alstyne said in a statement. “The survey verifies the critical need for well-trained collision repair technicians – both today and in the future – and it also confirms the outstanding professional and financial opportunities that are available in the industry. Today’s rapidly changing vehicle technologies and materials require technicians who have the training and ability to utilize information, knowledge and skills to repair damaged vehicles correctly. There has never been a better time to consider a rewarding career in the collision repair industry.”

What’s interesting here is how techs are making their money. CREF and I-CAR reported that flat-rate compensation fell again.

Pride Collision Centers President Randy Stabler told the International Bodyshop Industry Symposium in February that flat-rate was a mistake. It creates a workforce of individual employees running their “own little business” within your company, he said. The system fosters “very short-term thinking” and doesn’t incentivize employees to protect the company, he said.

If you agree with Stabler’s assessment, it appears that offering a plan other than flat-rate won’t be the deal-breaker with a prospective hire that it might have been more than a decade ago.

Pay is only part of the recruitment or retention process. If you’re in the less than 3 percent of the industry not offering any benefits — down from 19 percent in 1995 — you’re probably going to have a hard time finding staff.

If competitors aren’t offering them, retirement benefits could be a huge differentiator for a employer. Gerber Collision already has said a benefits initiative including an improved 401(k) program has helped with a persistent tech shortage.

The Boyd Group, which owns Boyd Autobody, Gerber Collision and Assured Automotive, in 2018 put half of its projected $11 million CAD savings from U.S. tax cuts into better benefits for its technicians. It increased vacation and holiday pay for commissioned repairers, and it doubled its employer match and shortened vesting on repairers’ 401(k)s.

“We’re not out of the woods” on the tech shortage, but the Boyd Group made enough progress to post the kind of sales results it did in the fourth quarter, CEO Brock Bulbuck told analysts earlier this year.

Some employers argue that they just pay employees more instead of offering a retirement account, according to Eric Frazer, senior business development for HR services firm and Society of Collision Repair Specialists 401(k) partner Decisely. “That’s taxable money,” he said.

A plan like SCRS’ 401(k) for members “could be a net win” for employee and employer in this regard, Frazer said.

Find out more about the SCRS 401(k) plan, which can save companies more money than trying to go it alone, on www.scrsbenefitscenter.com or with this webinar.

Job fairs were more effective for shops recruiting technicians in 2019 than in 2016, according to a Collision Repair Education Foundation and I-CAR study. (Provided by CREF)

Nearly a third of production technicians made at least $70,000 in 2019, according to a Collision Repair Education Foundation and I-CAR study. (Provided by CREF)

A smaller percentage of shops reported offering life insurance and retirement in 2019 than in 2016, according to a Collision Repair Education Foundation and I-CAR study. (Provided by CREF)