Here’s our latest monthly roundup of areas spotlighted as tip-worthy by the DEG. To receive the tips as soon as DEG releases them, like/follow the DEG’s Facebook and Twitter feeds. (It also posts videos to a YouTube channel once in a while.) Or just browse the nearly 15,000 inquiries and responses in the database and see what else you learn.

The DEG in a tip tweeted Sept. 3 reminded collision repairers that leak tests following air conditioning system repairs are not included in any of the three estimating systems.

“Repairs involving air conditioning systems may need a leak test after the system has been recharged,” the DEG. “The labor needed to perform a leak test using the various equipment available is NOT INCLUDED and would be an on the spot evaluation. Some testing kits may use a consumable product that must be injected into the system which is also NOT included in the labor time.”

They also make a point of defining “refrigerant recovery” — which both also say isn’t included. (Audatex also treats this as not-included but doesn’t define it.)

Get your configuration right in Audatex

Repairers and insurers should remember to select options on a vehicle to avoid operations being discounted in Audatex, according to the DEG in a tip tweeted Sept. 9.

The tip featured a Sept. 5 YouTube video explaining the issue and solution.

DEG Administrator Danny Gredinberg in the video used the example of a 2017 Subaru Forester.

After decoding the VIN in Audatex, a repairer or insurer might see a list of all options, Gredinberg said. They’ll want to review and add the relevant options.

Otherwise, a situation like the one Gredinberg illustrated on the video could occur.

He showed how an overhaul and remove-and-install of a 2017 Subaru Forester bumper cover contained line items for 0.7 hours of labor for R&Is of the bumper step pad and two mudguards. However, the time for those operations wasn’t included in the 1.2 hours allotted for the entire work.

Gredinberg said he contacted Audatex and was told it was a function of the estimating system.

The user needs to select the options, Gredinberg said, and demonstrated an estimate where this had been done. This time, the system allocated a total of 1.9 hours for the overhaul and R&I of the bumper cover.

“This time they are now truly being factored into the labor time of replacing the bumper cover,” he said.

Stone guard masking is only included in Mitchell’s basic “gravel guard” time — and not at all in CCC and Audatex’s times, the DEG advised in a tip tweeted Sept. 16.

“CCC/MOTORS have updated the GTE pages define that masking operations needed for ‘stone chip guard’ coating is NOT INCLUDED,” the DEG wrote.

“…Audatex: Page 148 Audatex DBRM Does not include masking in the application of gravel guard.”

It said Mitchell’s “gravel guard” formula adds 0.5 hours for the first “major” panel and 0.3 hours apiece for any other panels.

CCC’s recent explanation on how the system handles pickup box seam sealer for a 2015 Toyota Tacoma formed the basis of a DEG tip tweeted Sept. 23.

A DEG user had submitted an inquiry regarding replacing the bed assembly on the Tacoma, an operation they said is allotted 12 hours in CCC.

“After review in the Pick Up Box group(s), Floor subgroup(s), the estimated work time of 12.0 hours applied to the inner Box Assembly with a footnote that states, ‘LABOR: Time does not include R&I bumper, pick up box or box set back. Time includes R&I/R&R side panels and all bolted-on parts.’ is correct and appropriate,” CCC wrote.

However, it directed the user to its P-pages, which grant that shops might need to add seam sealer work as a manual operation. 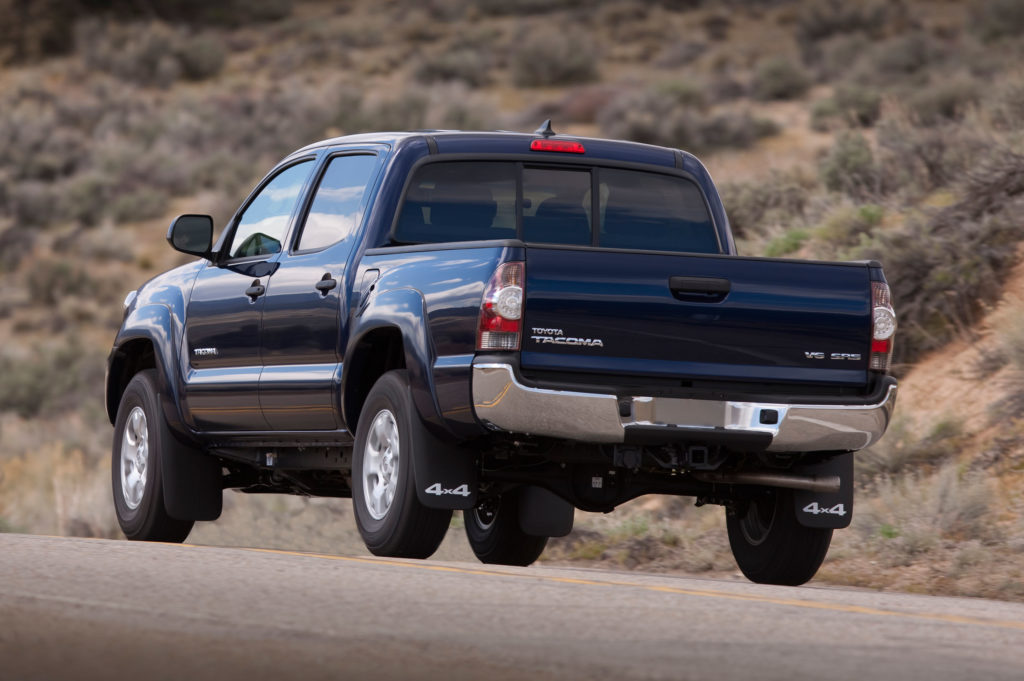 CCC includes seam sealer in labor times for multiple operations, but it also precedes some of these references with a note that this guidance could be altered by an OEM replacement part lacking the factory seam sealer.

“Some replacement components may or may not be supplied with duplicated OEM caulk/seam sealer,” CCC’s P-pages state when discussing a box assembly. “This is not included in R&R time and requires an on-the-spot evaluation.”

One of the estimating service’s recent updates added similar direction regarding fender outers.

The DEG in a tip tweeted Monday directed users to read Mitchell’s P-page advice regarding a frame assembly R&R.

After explaining what it considers included and not-included, Mitchell points out that a frame replacement might be more involved than those bullet points indicate.

A repairer might need to add labor charges related to these items or risk eating some of the cost of the operation and preparation, it seems.

“NOTE: It may be necessary to transfer parts from the damaged frame or order new parts to use on the new frame,” Mitchell writes. “This cannot be determined until you see the new frame. The needed additional time for this operation must be estimated.” (Emphasis Mitchell’s.)

The DEG suggested repairers also consult the SCRS Guide to Complete Repair Planning as a cheat sheet of operations that might need to be added. 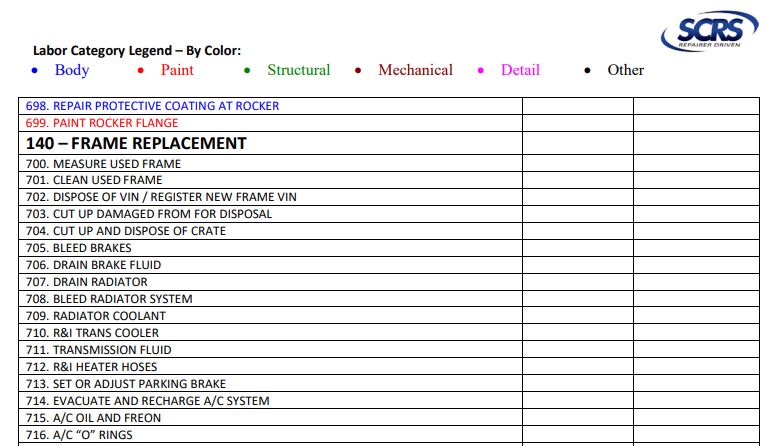 “How incorrect option and accessories can impact your Audatex Estimate labor time.”

Repairers and insurers should remember to select options on a vehicle to avoid operations being discounted in Audatex, according to the Database Enhancement Gateway in a tip tweeted Sept. 9. The tip featured a Sept. 5 YouTube video explaining the issue and solution. (Screenshot from DEG YouTube video featuring Audatex)

The 2012 Toyota Tacoma is shown. The 2015 version shares the same refreshed design features. (Provided by Toyota)

Possible operations required during a frame replacement, according to the Society of Collision Repair Specialists. Not all might be included in estimating system times. (Provided by SCRS)