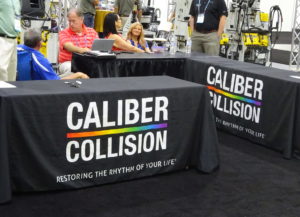 Caliber Collision last month announced it would pay up to $500 of the deductible for any COVID-19 coronavirus first responders and medical workers.

The company will pick up and deliver the frontline workers’ vehicles itself and partner with Enterprise on rentals if insurance lacks such coverage.

“Right now, we see a big need to step up and provide help for our nation’s frontline medical professionals and first responders,” Caliber CEO Steve Grimshaw added. “We recognize that the current environment is putting a severe strain on the important workers who do so much to keep our communities running, and we want to show our gratitude in the best way we know how. We want to keep the vehicles of frontline medical workers and first responders safely on the road.”

“COVID-19 and the shelter-in-place requirements nationwide have made us think differently about how we serve our communities, and, as an organization, we understand that new customer needs have emerged because of this pandemic,” Grimshaw said in a statement. “We have a history of being deeply connected to the communities that we serve and cherish the support that we have been able to provide throughout the years to programs such as the Rhythm Restoration Food Drive, Changing Lanes, National Auto Body Council’s Recycled Rides®, and the American Heart Association.”

Caliber said it wouldn’t offer the deductible support or rental car if the action was “prohibited by law” or the vehicle was a total loss. “Deductible Support and Rental Car Assistance is only available on repair orders authorized by the applicable insurance carrier authorizing payment on the Medical Professionals’ or First Responders’ vehicle,” Caliber wrote.

Caliber’s initiative is interesting given indications that the company’s financials are suffering.

Prior to the April 15 Caliber announcement, the nation’s largest multi-shop operator announced it had “right sized the support staff” and slashed executive salaries as a response to the economic burden from the COVID-19 coronavirus. The company also told landlords it would cut rent payments 40 percent and told at least one vendor it would apply “NET90 payment terms” to bills received April 1 or later.

“The outlook change to negative reflects the potential stress to Caliber’s credit metrics as a result of the impact of the COVID-19 outbreak,” Moody’s Vice President Charlie O’Shea said in a statement.

O’Shea noted Caliber’s stores remained open and were considered essential, but “assignment volumes have declined as a result of lockdown orders in states that represent more than 90% of Caliber’s center footprint, and this results in uncertainty with respect to the potential stress to credit metrics as a result.”

Moody’s on April 29 said Caliber’s debt stood at about 6.9 times its earnings before interest, taxes, depreciation and amortization for the 2019 fiscal year. The company posted an EBIT/interest rating of “roughly 0.7 times” in the 2019 fiscal year, indicating it wasn’t making enough to cover its interest.

Asked if it would have been better to meet vendor and landlord obligations before instituting the “Restoring You” charity program, Caliber said in a statement: “Thank you for contacting us. We do not have new information to share at this time, but will let you know if we do in the near future.” It said the statement also applied to a separate inquiry for a response to the Moody’s outlook change.

Despite the definitions associated with the ratings, Moody’s in January 2019 seemed optimistic about Caliber. It conveyed a similar sense when reaffirming the B2 stable rating in January 2020.

“Credit metrics should improve over the next twelve to eighteen months driven by earnings growth as the company continues to realize synergies related to the merger, continues to execute its footprint expansion and leverages its increased scale,” Moody’s wrote in January 2020. “In addition, benefits from strong industry fundamentals should continue to support stable and predictable demand for its services.” It thought Caliber’s leverage would drop to “the low 6 times” and EBITA/interest would near 1.5 times.

Then came COVID-19 and the national response to the virus,

“(T)he weaknesses in Caliber’s credit profile, including its exposure to volume declines, have left it vulnerable to shifts in market sentiment in these unprecedented operating conditions and Caliber remains vulnerable to the outbreak continuing to spread,” Moody’s wrote April 29. “We regard the coronavirus outbreak as a social risk under our ESG framework, given the substantial implications for public health and safety. Today’s action reflects the impact on Caliber of the breadth and severity of the shock, and the broad deterioration in credit quality it has triggered.”

Moody’s said it could upgrade Caliber if it brought debt/EBITDA to 5.5 times and EBITA/interest of 2.0 times.

“Ratings could be downgraded if either due to weakened operating performance or aggressive financial strategy credit metrics (proforma for acquisitions) fail to demonstrate tangible, sequential improvement in earnings beginning in Q2 2020 and indicating a predictable path to achieving debt/EBITDA of around 6.5 times and EBITA/interest of at least 1.25 times in the 12-18 months from Q2 2020, or if liquidity deteriorates for any reason,” Moody’s wrote.

The Caliber Collision logo is shown. (Provided by Caliber via PRNewsfoto)