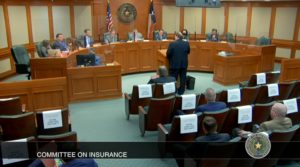 Data from 46 appraisal clause process outcomes shared by a Texas public adjuster last week found insurers’ offers would have left customers short of the amount needed to fix their vehicles by an average of $5,312.46.

Had the consumers not gone through the appraisal process, the insurers could have incorrectly underpaid claimants by more than $244,000 collectively, based on the information shared by public adjuster Robert McDorman, general manager of Auto Claim Specialists.

The findings McDorman shared with us and with some Texas lawmakers can be found here. We redacted the claim numbers and policyholder information to preserve customer privacy, and we also added fields to analyze the difference between the original insurer estimate and the amount agreed to following the appraisal process.

“These numbers DO NOT include the Economic Total Loss claims we handle as Repair or Replace claim type and ultimately flip to a repairable vehicle, as it should have been in the 1st place,” McDorman wrote in an email Monday. (Emphasis his.)

On average, insurers’ settlement offers before the appraisal clause invocation were wrong by about 45.86 percent, according to McDorman’s data. The final amounts awarded customers on average were more than double what the insurers had offered.

Under the typical right to appraisal process, either the customer or insurer can has the right to use an appraisal clause within a policy to resolve a dispute over the amount owed in a claim. Both parties hire an appraiser to evaluate the vehicle separately. If they agree on a dollar value, that amount is binding on everyone. If they can’t come to a resolution, they agree to hire an “umpire” who also conducts an assessment of the damage. If the two appraisers agree or one appraiser and the umpire agree on an amount, that value is binding.

“During my testimony I stated that our average negotiated increase in repair procedure dispute claims we handle is more than 35%, and that we often uncover unsafe repair procedures in the insurance carriers’ discounted repair estimates,” McDorman wrote in an email to the Texas House Insurance Committee, which recently evaluated a bill related to appraisal clauses. “By nature, I am always conservative in my projections. Unlike the Total Loss claims and Inherent Diminished Value claims we handle, where at the stroke of a key we can generate a report showing the settlement details of each, the repair procedure dispute claim types require me to manually go through our database to retrieve the data. These types of claims are very technical and require a great deal of experience to handle. At the end of our audit of these types of claims from Texas insureds only, we found the average under-indemnification to be 90%! …

“I wanted to provide you and your fellow committee members with the actual under-indemnification on these types of claims and the documents supporting them.  (This constitutes ALL worked repair procedure claims, not picking and choosing claims.)”

Many of the nation’s Top 10 auto carriers are represented in McDorman’s data. The largest Texas and national auto insurer State Farm isn’t, but that carrier also removed the right to appraisal for repairable vehicles about four years ago. (It still offers an appraisal clause for Texas total loss valuation disputes.)

“Please note State Farm has restricted their insureds from invoking the right of appraisal in contest of loss disputes on repairs regardless of whether the written repair estimate constitutes an unsafe repair,” McDorman wrote to the committee. “Thus, the 90% settlement increase we see on repair dispute loss types does not include State Farm insureds who have disputes over the repair methodology used by State Farm.”

The largest insurer error in terms of dollar value involved Liberty Mutual underestimating the amount of work needed by $26,689.56. The $35,934.93 awarded by the appraisal clause process was nearly four times the $9,245.37 the insurer had asserted it owed for the repair. This appraisal award was the only one in McDorman’s records large enough that the consumer wouldn’t have been eligible for Texas small-claims court, which is limited to disputes of $20,000 or less.

The largest-magnitude mistake was Safeco offering $3,527.11 but ultimately owing their customer $21,281.72 — six times the amount the insurer had originally felt was appropriate.

The smallest dollar-value difference encountered involved Progressive, which held a vehicle only needed $1,756.15 in repairs. The appraisal process found $2,447.97 in work was necessary, a difference of less than $700.

The smallest-magnitude disparity saw Liberty Mutual estimating $6,866.53 in repairs and the work ultimately calculated through the appraisal process at $7,924.93 — an increase of only 15.41 percent. 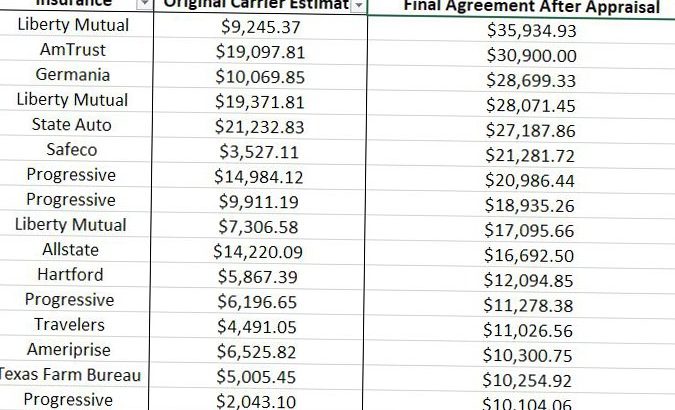 These lower-dollar claims and McDorman’s data in general would seem to support the appraisal clause bill supported by the Insurance Committee and ultimately passed by the Texas House on Friday.

House Bill 2534 would require appraisal clauses in Texas policies for both totals and repairable vehicles and force the loser to pay the winner’s fees. This is in contrast to traditional appraisal clauses requiring both sides to cover their respective appraiser expense and split the umpire bill.

Under HB 2534, if the insurer’s estimate is $1 or more short, they must cover the customer’s reasonable appraisal costs. Both sides would still split the cost of the umpire if one was needed.

This “loser pays” provision could make exercising the right to appraisal more feasible and practical for consumers on smaller-dollar disputes. Under the traditional “both sides pay” setup, using small-claims court to address such arguments might make more financial sense.

McDorman, for example, said his firm charges about $800 for a total loss appraisal.

In another email to the Insurance Committee, McDorman agreed that “a very small percent” of claims go to appraisal, but he argued that this reflected a lack of consumer knowledge. “I have talked to thousands of insureds over the years, and I have yet to hear from a single one who was told by their carrier about their right to invoke appraisal,” he wrote. “The percent of insureds who request appraisal is currently small because hardly anyone knows about this right. This is something that hopefully publicity from this bill can help to change.” (It was unclear if he was referring to total loss appraisals, repairable vehicle appraisals, or both.)

A Winnsboro, Tex., repairer told lawmakers that the appraisal process is frequently necessary to make her customers whole on auto repair claims.

“Our customers are having to invoke their appraisal clause at least 50% of the time to get proper repairs,” Griffin’s Paint & Body owner Crystal Griffin wrote in support of HB 2534. “If it were not for that option our customers would be left to foot the bill by thousands of dollars and/or we would be going into our pockets even more than we already do to help our community. The general public is under the impression that once they pay their deductible, the insurers will take care of all the rest that is involved in the proper repair of their vehicle. As it is now, that’s just not the case and the appraisal clause is the only option they have to make them whole per the contract they entered into with their insurance company.”

Even if the data here doesn’t reflect the average repairable vehicle claim, the fact that insurers can make these kinds of errors is still a huge concern for body shops and consumers. It’s also a point in favor of empowering consumers with HB 2534.

These findings also ought to worry insurance actuaries, regulators, reinsurers and claims executives too. If in-house adjusters or subcontracted estimators can be this inaccurate even some of the time, how much are reserves and potential loss risk being underestimated?