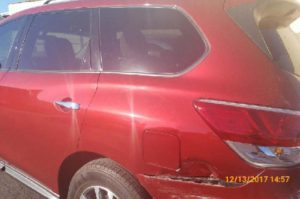 A civil lawsuit filed by an Arizona couple against State Farm two years ago over the insurer’s refusal to pay for a new quarter panel for their damaged 2013 Nissan Pathfinder has been settled out of court for an undisclosed sum.

The case, Wilhelm v. State Farm, was settled on Aug. 6, according to the Marcopa County, Ariz., Superior Court, and was dismissed on Aug. 16. It had been scheduled for trial on Aug. 31.

The plaintiffs, Jason and Melissa Wilhelm, filed suit against the insurer on Sept. 13, 2019, alleging breach of contract and a lack of good faith.

As is usual in such cases, a confidentiality agreement included under the terms of the settlement stipulates that neither party may comment further on the suit. An attorney for State Farm declined to comment, as did the Wilhelms’ attorney.

The suit revolved around payment for repairs by the Mesa, Ariz.-based auto body shop Coachworks Auto Body to the Wilhelms’ Pathfinder. According to Coachworks, State Farm had insisted that the shop replace the two damaged parts, the quarter panel and outer wheel well, with a single, joined unit from a donor vehicle, arguing that this would be an acceptable repair.

Coachworks maintained that new parts were required to maintain the collision safety that had been engineered into the vehicle by Nissan. 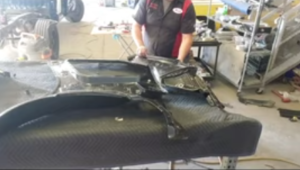 In their suit, the Wilhelms had been seeking redress including attorney’s fees, punitive damages, and the more than $100,000 they owed Coachworks in storage charges over the three years they and State Farm had been in disagreement about reimbursement.

Matt Radman, the manager of the auto body shop, maintained that the vehicle’s construction made State Farm’s proposal impossible. In a March 10, 2021 video, Radman explained that the Pathfinder’s rear quarter panel had been engineered as a series of overlapping metal components, and must be rebuilt from the inside-out. (Radman references an “LKQ” part in the video, but he later explained that he was using the term as a generic synonym for a recycled part, rather than a reference to the LKQ Corporation.)

Disassembling the used components would require drilling out the spot welds used at the factory to join the components, Radman said in the video. The tool needed to remove the spot welds, he explained, is “greater than the allowed size” of the 8mm spot welds required for reassembly.

“When you change that size … you’re really changing the way this sheet metal is supposed to crush, tear, rip” to protect occupants in a subsequent crash, Radman said in the March video.

“All I ever wanted to do from the very beginning was to fix their car right,” Radman told Repairer Driven News.

Since at least 2016, Nissan has taken the position that the use of salvaged or recycled parts “raises serious concerns about quality, suitability, safety and warranty. For this reason, Nissan North America DOES NOT approve of the repair of our vehicles with salvage parts or assemblies.”

The Wilhelms cited safety concerns in a Jan. 4, 2021 court filing. “Three years ago, the Wilhelms asked State Farm to pay a body shop estimate to perform procedures recommended by Nissan’s Autobody Repair Manual to repair the crushed rear quarter of their Nissan Pathfinder,” they wrote. “State Farm slashed that estimate in half by specifying the use of a full rear-quarter assembly saw-cut from a salvage yard vehicle. The body shop notified State Farm that Nissan had strictly prohibited such a repair technique in writing and refused to perform it. … The body shop’s master mechanic told State Farm’s adjuster that its repair would weaken structural components of Nissan’s crash-tested safety systems and make it more likely that the vehicle could explode or fail to protect rear seat occupants in a subsequent collision. State Farm has refused to pay one penny more than its repair estimate based on its contention that it was prepared to rebut the positions taken by the manufacturer and the body shop that its specified repair method was unsafe.”

“Upon the first reporting of the loss, and continuing through the date of this Complaint, State Farm has engaged in a course of conduct intentionally designed to serve State Farm’s interest in minimizing the amount it pays to resolve automobile damage claims and frustrate and impede the plaintiffs’ interest in restoring their Vehicle to the same condition it was in prior to their collision,” the lawsuit states.

The suit also alleged that State Farm reneged on its initial agreement to have the dispute settled through dispute resolution, under an appraisal clause that was in effect at the time.

Typically, resolution works in the auto insurance industry in this way: After an impasse has been reached on the amount owed the consumer, either the insurer or policyholder can invoke the appraisal clause. Both sides hire appraisers, and both appraisers agree on a third appraiser to serve as an “umpire,” with the umpire’s costs split between the policyholder and insurer. If any two out of the three agree on a dollar value for the loss, that amount becomes binding.

The plaintiffs said that State Farm, after initially agreeing to the appraisal process, refused to participate. State Farm denied that it had breached the contract, and said that it had acted in good faith regarding the repair and appraisal clause.

Featured images: The 2013 Nissan Pathfinder at the center of the Wilhelm v. State Farm case. (Provided by Coachworks Auto Body)