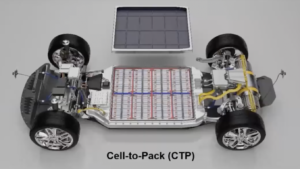 Developments in battery pack technologies could reduce the number of components needed by as much as 40 percent, yet might present greater vulnerability to collision damage and challenges in the repair process, according to representatives of Parker LORD.

In a recent webinar presented by EV magazine Charged, technical fellow Tim Fornes explained that OEMs are increasingly interested in moving away from what’s called cell-to-module, or CTM, construction of battery packs, and toward cell-to-plate, or CTP, technology. Parker Lord is among the companies developing a new class of adhesives and gap fillers needed to make the new technology work.

CTP presents a number of advantages over CTM, primarily in weight reduction and increased energy density, both crucial considerations for EVs, but has a number of drawbacks, too, Fornes said.

Most OEMs or their suppliers, he said, currently use CTM technology to construct battery packs. In this method, the individual battery cells are bundled into modules, which are secured to an aluminum cooling plate. Each module might hold a few to a dozen cells, depending on the design. 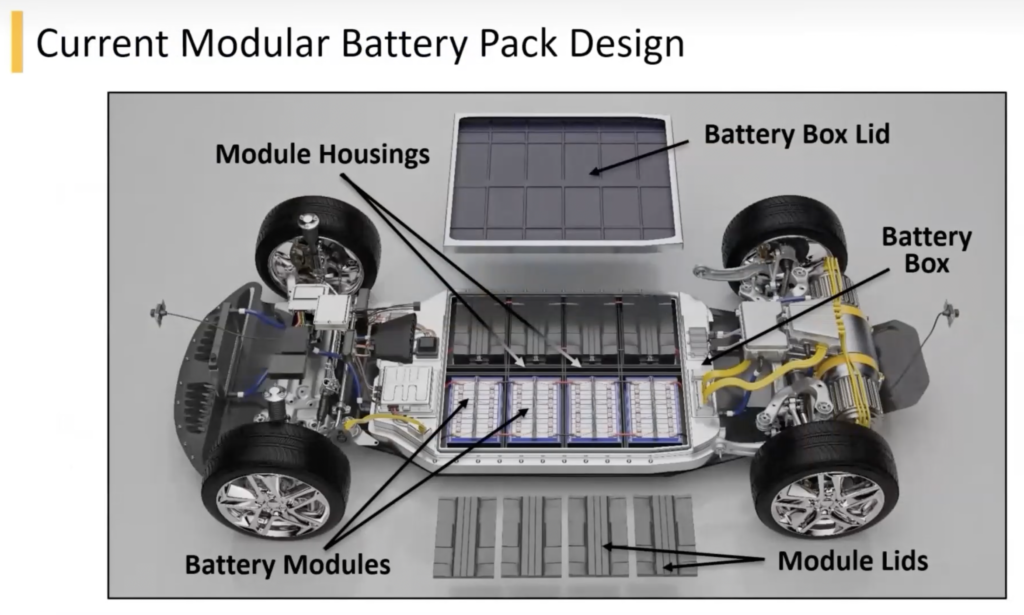 This construction calls for two different gap fillers, with different properties. The first is a low-strength adhesive, used between the cells and the modules. This filler, usually a silicone material but sometimes a two-part urethane, needs to allow the cells to be removed from the modules for service without damaging either. It also needs to be thermally conductive, to transfer heat developed by the cells.

The second gap filler, usually a type of two-part urethane, attaches the modules to the cooling plate. This, Fornes said, needs to provide a strong bond for structural integrity, and it, too, has to be thermally conductive.

Both of these fillers have to be flexible enough to withstand the jolts and vibrations that come from use on a vehicle, while holding up for 10 years or more through temperature extremes. They also need to resist delamination, which would affect the conduction of heat. 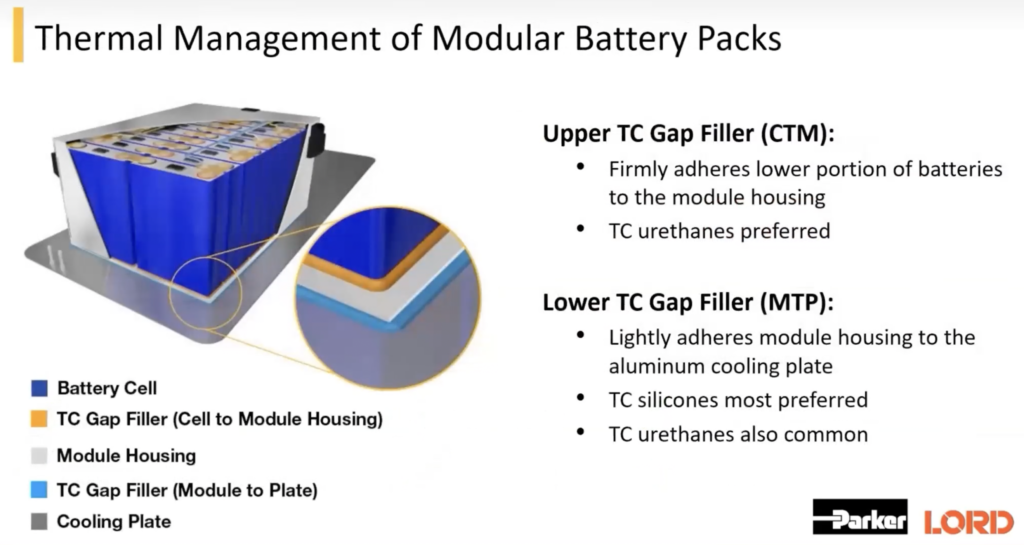 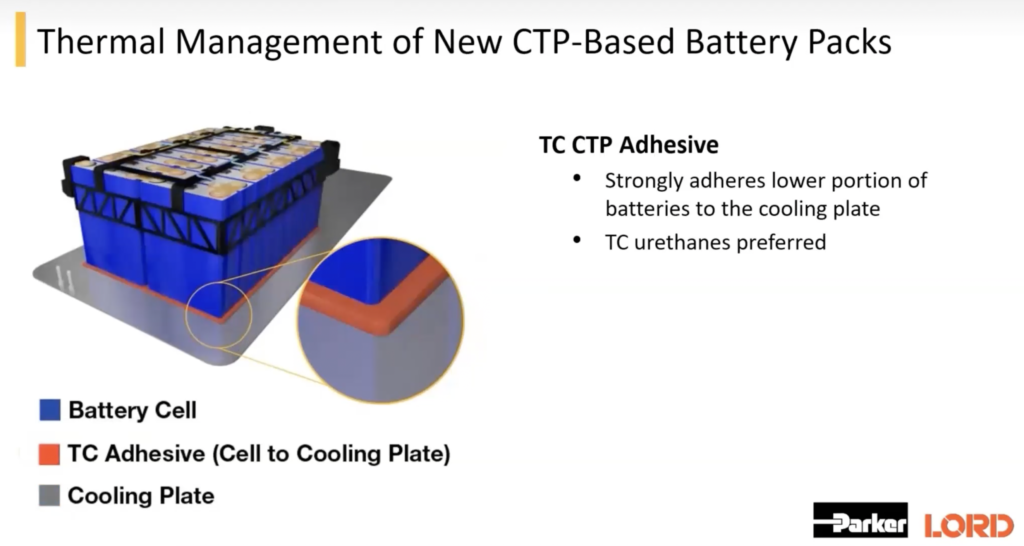 CTP construction does away with the modules. Instead, the cells are bonded directly to the aluminum cooling plate. This has enormous advantages in battery electric vehicle (BEV) design, because it allows lower weight and much higher energy density — essentially, more battery power from the same volume, Fornes said.

The filler used with CTP technology must provide structural strength, as well as thermal conductivity, and it must be able to also withstand environmental factors.

Fornes said CTP technology could reduce the parts count by as much as 40 percent, because it would do away with not only the modules, but a certain amount of wiring and electrical junctions known as bus bars. That would reduce production costs, and, at least theoretically, repair costs.

It would also give designers greater latitude in the size and shape of the individual cells, Fornes said.

With no modules, CTP also provides fewer “interfaces” though which the heat generated by the batteries must pass, improving cooling.

There are drawbacks to CTP technology, Fornes said. One that repairers might encounter is the strength of the bond between the cells and the cooling plate, in the event that the cells need to be removed. “Getting those batteries off and replacing them is not trivial,” he said.

Fornes also noted that CTM provides greater battery protection in the event of a crash, and keeps the cells in electrical isolation to prevent “thermal runaway,” when the heat generated within the pack exceeds the heat dissipated to its surroundings, possibly starting a fire. CTM also enables control and monitoring of individual battery modules.

Parker LORD has been developing gap fillers that are capable of maintaining strong, flexible bonds between polyethylene terephthalate (PET) wrapped battery cells and their aluminum cooling plate. The PET is mainly used to provide the cells with an extra layer of electrical insulation, to prevent arcing.

Through shear testing, which included 1,000 hours of aging at 85 percent relative humidity and 85 degrees Celsius (185 Fahrenheit), the company has developed new, thermally-conductive adhesives that it believes will bond PET to aluminum under stringent environmental conditions, said company scientist Susan Donaldson.

Next steps, Donaldson said, are to continue to improve the materials’ performance, and to tailor the technology for additional substrates, such as e-coated material and nickel-coated steel.

In the longer term, she said, the company will be working to align itself with “cell-to-chassis” configurations, to prepare for “next-next-gen technology.”

For details about the development and testing of the CTP fillers, read Parker LORD’s whitepaper at LL3253-TCAdhesivesforCell-to-Pack.

All images provided by Parker LORD.