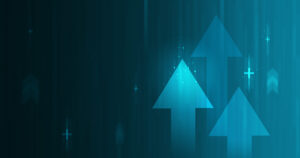 Every body shop has likely been feeling the force of inflationary pressures and increased repair costs but what exactly are the trends causing the uptick in costs?

In recent conversations with CCC Intelligent Solutions and Mitchell International, Repairer Driven News found that it’s not just the obvious factors such as parts shortages and supply chain hiccups. Mitchell International Claims Performance Director Ryan Mandell said overarching trends include reduced repairability of major component panels, increased vehicle complexity, a shift in the car parc toward more luxury vehicles, trucks and SUVs — all of which are more expensive to repair — and a gradual shift toward higher OEM parts utilization and higher labor rates.

Some of the component panels that can’t be repaired include fenders, doors, hoods, and deck lids because they’re constructed of lighter-weight materials and “do not respond to a crash the same way that traditional mild steel does,” Mandell said.

“In many cases, the damage on lighter-weight panels is more severe which results in a higher rate of replacement,” he said. “Additionally, bumper covers that have radar sensors mounted behind them may not be deemed repairable (regardless of the extent of damage) by the OEM as there are potential concerns with the application of body filler that may disrupt the functionality of the radar sensors.”

Mandell noted that “2022 numbers are far from fully mature,” and said he expects all of the numbers he provided, except for repair percent of total labor, to be higher by year-end, especially since Q4 is typically the highest severity quarter every year, he said.

As for the complexity of vehicle repairs, Mandell said the increasing trend toward lightweighting is one example of how repairs can be more difficult. “Additionally though, the presence of ADAS is becoming near-ubiquitous on newer model vehicles meaning that diagnostics are now a compulsory component of collision repairs and ADAS calibrations are becoming a more frequent operation as well.”

Three-stage paint jobs are also a factor as their frequency of use by OEMs has increased over the last five years. “Over 10% of repairable estimates are for 3-Stage painted vehicles, which can add roughly 6-8% to the overall repair cost,” Mandell said.

Also over the last five years, OEMs have increasingly been patenting and branding their parts making the manufacture of aftermarket parts impossible, especially ADAS sensors and cameras, which are almost completely sold only by OEMs, according to Mandell.

In CCC Intelligent Solutions’ latest “CCC Trends” report, released in August, Insights & Analytics Senior Director Susanna Gotsch covers factors that are contributing to the increase in repair costs, with replacement part costs being one of them. That cost rose by 7.4% from 2020 to 2021 and another 6% from last year to June 2022, according to Gotsch.

“Many industries, like the automotive industry, had moved to a ‘just in time’ inventory system prior to the pandemic,” Gotsch said in CCC’s August Trends video. “An approach that has been sorely tested over the last two years with surging customer demand and recovering auto accident and claim counts. Inventories have been drawn down from plants being closed at the outset of COVID and have operated at lower levels of production due to shortage of necessary components and labor. The industry was hit with higher raw material prices and higher transportation costs from higher wages and fuel prices. The byproduct: the cost of replacement parts has soared.”

She also found that the shortage of collision repair technicians contributes to increased labor rates all while more repairs are needed due to a rise in auto accident frequency.

“Shortage of collision repair technicians has been an issue for the industry for some time but has been worsened over the last two years as overall labor shortages impact the industry further,” Gotsch wrote. “Even before the pandemic Universal Technical Institute predicted a wave of retiring baby boomers would create 100,000 auto technician job openings over the next decade or so, with the Bureau of Labor Statistics projecting a 4 percent decline in employment in the overall auto technician field through 2029.

“In fact, most repairers indicate the technician shortage has been the primary reason for longer backlogs of work. …Many shops have indicated they cannot repair as many vehicles at the same time as they did before the pandemic, as repairer productivity (measured by labor hours per shop day) has fallen.” 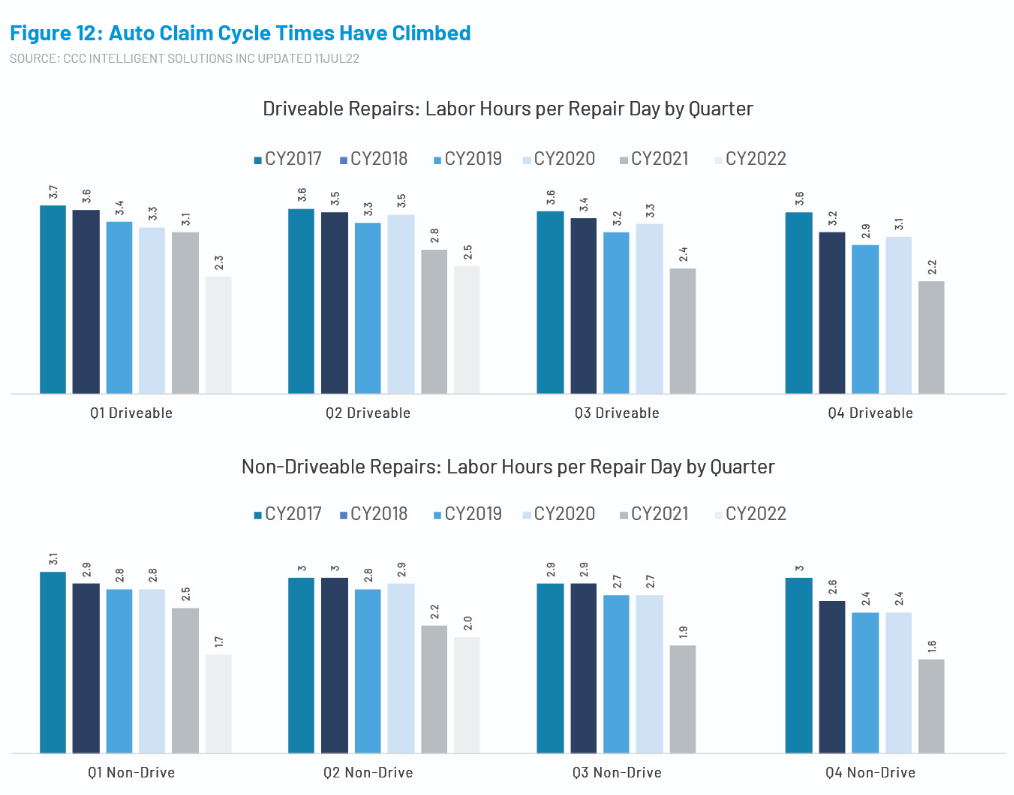 The competition between body shops to hire out of a smaller pool of trained technicians has also increased the labor rate, according to Gotsch.

“Data from the Bureau of Labor [Statistics] shows average weekly wages for collision repair employees have been increasing at a faster pace, with Q4 2021 average weekly wages up 7.5% from Q4 2020, versus an increase of 6.1% between Q4 2019 and Q4 2020. Labor rates have also risen, with some of the largest increases in fifteen years. Higher labor rates combined with continued growth in the average number of labor hours per repair with increased vehicle complexity is another key factor driving up repair costs.” 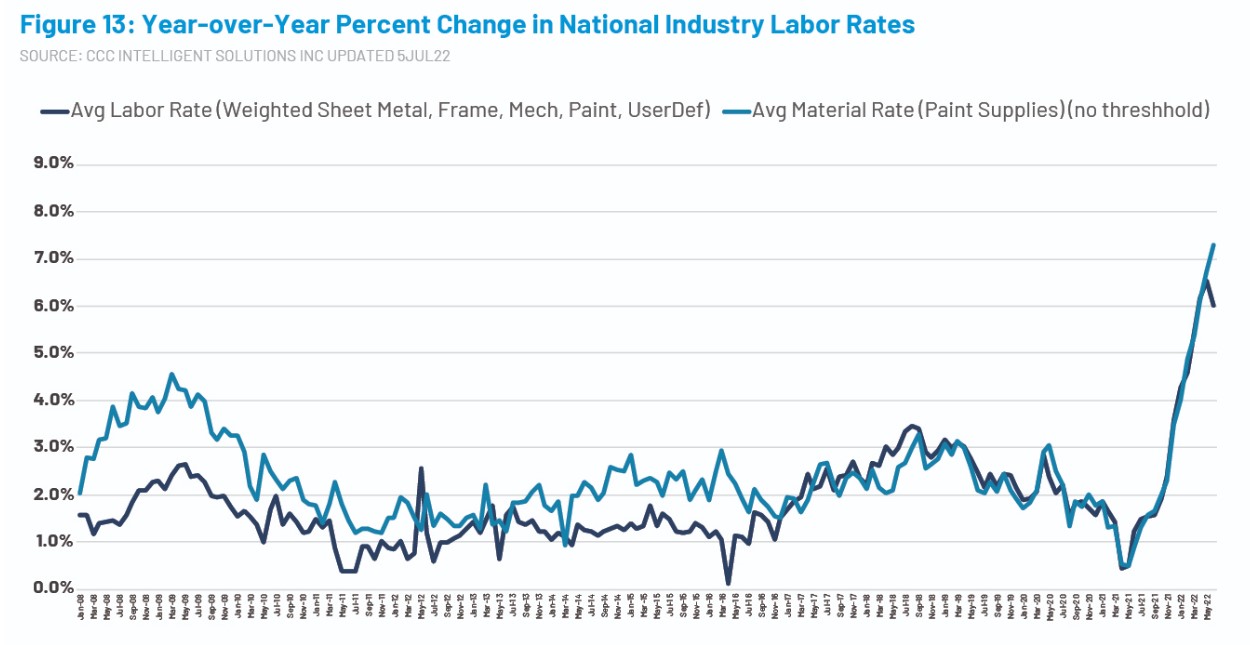 Mandell also noted that shops are having to pay technicians more to compete in the current labor market “where well-trained technicians are hard to come by.”

“The higher labor rates we have seen are more of a function of the labor market as well as the inflation we are currently experiencing,” he added.

And, of course, the ongoing technician shortage — as Gotsch pointed out, “does not have a quick fix.”

“Finding technicians with the right skillsets is also a growing challenge as vehicle complexity increases. These factors combined suggest labor costs will also continue to be a primary driver of higher costs in the future, because like the cost of parts, while labor rate increases, like inflation, may have been smaller in the past, historically they have never fallen.”

In July, Collision Industry Conference Parts & Materials Committee members shared that, due to supply chain issues, rises in raw material costs and labor rates aren’t maintaining pace with inflation, which is causing shops to face increased costs. For example, paint and materials reimbursements are now only 18.5% higher than they were in 2017, compared to the 43.9% increase in paint and material costs that collision repair facilities have experienced in the same period of time, according to information shared at the April CIC meeting. And had 2017 labor rates maintained pace with inflation, the average current rate could now be $46.38 versus the actual average rate of $34.60.

What you can do to boost technician recruitment & retention