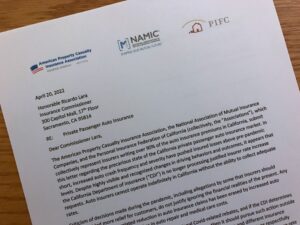 Insurance industry associations and major carriers are in agreement that it’s necessary to be able to collect “adequate rates” to stay in business — though in this case, they’re talking about the rates they’re allowed to collect from their auto insurance policyholders, rather than the labor rates they pay collision repairers.

In a joint letter, the National Association of Mutual Insurance Companies (NAMIC), the Personal Insurance Federation of California (PIFC), and the American Property Casualty Insurance Association (APCIA) warned California Insurance Commissioner Ricardo Lara that he is risking a crisis by refusing to approve any rate increases since the start of the coronavirus pandemic more than two years ago.

“Auto insurers cannot operate indefinitely in California without the ability to collect adequate rates,” the joint letter, sent in April and circulated earlier this month, says. “There is an obvious, and avoidable, market crisis looming,” wrote the three associations, which represent carriers writing more than 90% of California auto insurance premiums.

Repairer Driven News asked the insurance associations whether they believe that “adequate rates” are necessary for collision repair shops, too. NAMIC and PFIC did not respond, and APCIA did not address that question in its reply to RDN.

“The insurance industry has been monitoring the situation at CDI and their refusal to process private passenger auto rate filings for the last 2.5 years. As miles driven has returned to pre-pandemic levels, and the industry grapples with the same supply chain and inflationary issues as every other sector, the Department’s stated reluctance to even review the filings and data before them has become increasingly concerning,” Nicole Ganley, assistant vice president, public affairs for APCIA, said in an email.

“That concern is starting to manifest in some of the marketplace reactions we’re starting to see in CA. Our hope is that the Commissioner will direct his rate filing shop to resume their work, and to review the dozens of rate filings before them. Continuing their edict not to even review the rate filings before them may result in additional market disruptions and we’re concerned about the effect that may have on CA drivers,” Ganley said.

Lara’s office did not respond to a request for comment from RDN.

Lara has withheld action on rate cases filed by companies representing three-quarters of the California market, as a mechanism to compensate consumers for excess premiums paid during the stay-at-home period of the pandemic.

“Data we collected directly from the insurance companies themselves shows many of them failed to fully return premiums that they overcharged consumers,” Deputy Insurance Commissioner Michael Soller told the Associated Press. Part of the department’s effort is “to make it right for consumers who continue to have been overcharged on premiums during the pandemic.”

The associations are protesting that approach. “Criticism of decisions made during the pandemic, including allegations by some that insurers should have provided more relief for customers, do not justify ignoring the financial realities of the present,” they say in their joint letter. “Any temporary, pandemic-related reduction in auto insurance claims has been erased by increased auto fatalities and inflation-driven spikes in auto repair and medical care costs.”

Even if Lara believes that specific insurers owe more COVID-related rebates, the letter says, he should not take a blanket approach to rate filings. “The California auto insurance marketplace is diverse and different insurance companies have experienced different results over the last two years,” it says.

David Russell, a professor of insurance and finance at California State University, Northridge, told the AP, “The commissioner is an elected official and he’s trying to serve his constituents in a way that does not favor market forces. But if you suppress rates, you’re going to get availability problems.”

On Oct. 5, 2021, Lara ordered Allstate, Mercury, and CSAA to return to drivers more of the excess profits collected from them during the pandemic, or face legal action. An analysis by the California Department of Insurance (DOI) of new data showed that these three companies “have the greatest gap between what they initially refunded drivers, and what they should have refunded, to provide proper premium relief to their policyholders since the start of the COVID-19 pandemic,” the commissioner said at the time.

Lara’s ability to enforce his order was cast into doubt on Oct. 29, 2021, when a California appeals court ruled that he had no authority to order State Farm to pay more than $100 million in refunds to Californians who the commissioner found were overcharged for homeowners, condo and renters coverage.

In the case, State Farm General Insurance Company v. Lara et al., the California Court of Appeal rejected the commissioner’s contention that the state’s Proposition 103 gives him the authority to order rate refunds as part of his responsibility to ensure that Californians are charged fair rates.

The public interest group Consumer Watchdog filed an appeal with the California Supreme Court, which declined to review the lower court’s ruling.