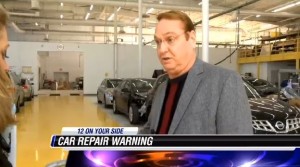 As large parts of the country dig out from snow, a Richmond, Va., body shop owner was featured on NBC12 warning viewers about aftermarket parts.

Bruce Hutchins of the Bruce’s Super Body Shops chain highlighted Virginia’s “like kind and quality” law, which allows insurers to use aftermarket parts for claims.

“These parts have not been crash tested,” Hutchins told the station. “But every major insurance company uses these parts.”

Hutchins said customers should know their rights, and NBC12 reporter Sarah Bloom cited his shop in urging viewers to advocate for themselves.

This advocacy could be encouraged by a shop owner without a news crew as well: If you don’t think a part is truly up to the job, get the customer on your side and have them ask an insurer for a “like kind and quality” component to try and get an OEM or a higher-quality part from the aftermarket, recycled, or refurbished industries.

“Obviously, they’re a lot cheaper than the OEM parts, but to say that they’re the same, in my situation, 99% of the time, they’re not,” Hutchins told the station.

Hutchins also pointed out to NBC12 that an auto dealer could conceivably recognize aftermarket parts when you go to trade your car, truck, or SUV and offer you less for it.

Similar issues were raised by the infamous “Anderson Cooper 360” investigation earlier this month. An insurer representative said aftermarket parts were limited to cosmetic ones and often just as good.

“That’s not true,” reporter Drew Griffin reprimands on the piece.

The Auto Care Association challenged the notion that aftermarket parts are low-quality after the CNN report. In a statement, the aftermarket trade group said:

“The CNN piece leaves car owners under the false impression that aftermarket parts in general are of inferior quality to the original equipment component.  There is absolutely no truth to this impression.  Non-original equipment parts are as good and often, better than the OE parts they replace.  In fact, they are often produced by the same company, but may come in a different box.  Companies producing parts in the aftermarket often have the opportunity to correct defects in original equipment parts that are frequently only discovered once the vehicle has been on the road.