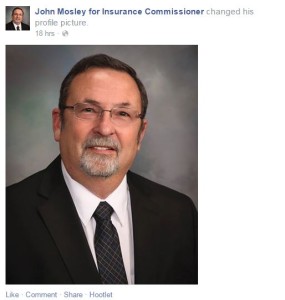 No Democrats or independents are running in the race, so the winner of the Aug. 4 primary will get the job.

The Clarion-Ledger reported in July 2014 that Mosley had planned to the office and noted that the owner of Clinton Body Shop was part of a lawsuit filed against auto insurers.

“I don’t mind sharing it with you. I … planned to run to run for Insurance Commissioner next year to try to put a stop to this,” Mosely says in a July 2014 WLBT report covering the lawsuit. See him and a video of the coverage here:

Middle District of Florida Judge Gregory Presnell ruled Friday against the shops but permitted seven of the eight counts dismissed to be dismissed. The case and several others in different states are being heard by the Florida court because the details are so similar.

New arguments are due in Capitol by March 20. Jackson, Miss.-based Eaves Law Firm, which is handling the Mississippi case as well as the Florida A&E v. 21st Century lawsuit, said following a similar January ruling in the Florida case that they expected that ruling and could satisfy Presnell in a new version of the A&E case.

A new complaint filed by the Florida shops seemed to carry more specifics, a feature Presnell said had been lacking in A&E and a factor also raised by a judge making a recommendation to Presnell in the Mississippi case.