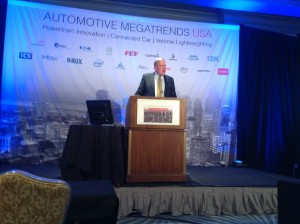 Repairer Driven News attended the vehicle lightweighting track of the Automotive Megatrends USA summit on Tuesday with an eye towards what the new weight-reducing materials in cars and trucks mean for collision repair.

We’ll get into the issues discussed with deeper coverage over the next couple of days, but here are five auto body insights we took away from the conference.

We’d also encourage everyone to also check out our host Automotive World’s own coverage and Repairer Driven News’ own Twitter feed of updates.

Here’s what we learned about collision repair in an era of aggressive lightweighting:

If you’re not ready for more advanced steel and aluminum in your body shop, you’re going to be left in the dust. Though GM and Chrysler managed to talk the government into a bailout a few years ago, there was zero sentiment from the experts that the feds would backtrack on the looming 2025 54.5 fleet mpg fuel standard.

And while lightweighting can’t get automakers all the way there — powertrain advances (another speaker track at Megatrends) are the other piece of the puzzle — it’s going to play a huge role. Plus, as one speaker observed, if you shave enough weight off of a vehicle, you can start to reduce the engine size.

“All of the above” is going to happen

There are the major, dramatic weight reductions you get from changing the materials used in your body-in-white — steel to aluminum in the F-150, for example — but no part is safe.

Kind of like someone at the doctor pulling everything out of their pockets and removing their shoes before stepping on the scale, automakers will likely look for any part that can be partially or completely replaced with a lighter material.

That can range from plastic transmission baffles replacing steel and rubber ones, as Jeffery Sternberg of DuPont noted, or a laser-welded aluminum inner door blank knocking weight down by more than eight pounds, an example offered by “all of the above” advocate CEO Ramzi Hermiz of Shiloh Industries.

A couple of good examples of this concept are the Volvo XC90 and Cadillac CT6, Hermiz said. 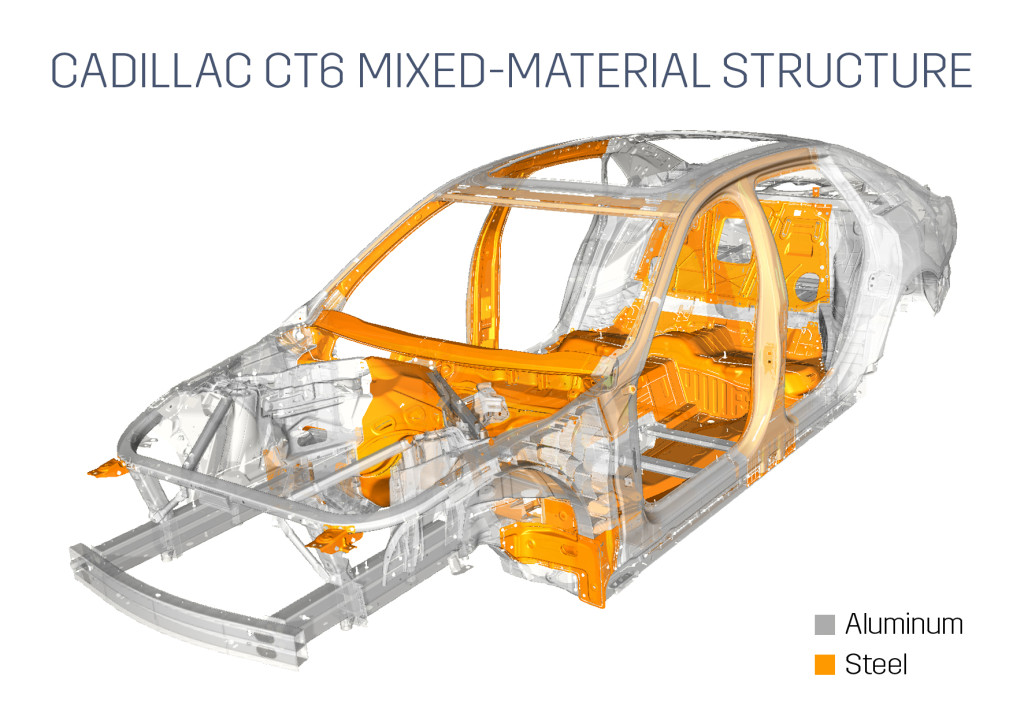 Cadillac touted the mixed-materials nature of the new Cadillac CT6, which it says is mostly aluminum but also has “13 different materials customized for each area of the car to simultaneously advance driving dynamics, fuel economy and cabin quietness.” (Provided by Cadillac)

Carbon fiber is an auto body nonstarter — for now

Steel, aluminum, and magnesium were much more likely to factor into auto bodies than carbon fiber, based on sentiments expressed by speakers at Megatrends 2015, held in Ford’s home turf of Dearborn, Mich.

Technology has a tendency to scale downward in cost, so it was little surprising that the price was seen as that much of a barrier — particularly with all the engineering brainpower in the room available to solve that problem. But automakers understand steel and aluminum, and those technologies are ready to go now.

It’s not that carbon fiber won’t be used to lightweight certain parts of the vehicle — it just probably won’t be the major structural component. However, Macher thought the compromise of using carbon fibers “inners” and alumium or steel “outers” or vice versa had potential.

The car of the future could be glued together

Much of the joining discussion discussed adhesives (they don’t like to call them glues) to join mixed materials that are stronger but more finicky to work with. This was no doubt partly because Megatrends invited experts from chemical engineering community to speak, but the merits were pretty clear.

Adhesives prevent corrosion issues when aluminum, steel, and magnesium touch — and they’re even used to fill the space between physical connectors for this purpose — they can be stronger than spot-welds since they cover a larger surface area, and they’re lighter than the metal added by more traditional welding processes.

While welding expertise is still going to be needed in the collision repair shop of the future, nontraditional joining — the Ford F-150s self-piercing rivets also received a nod — might factor into the process more and more.

This begs the question of if this will lead to more replace-not-repair components, such as panels on the Ford F-150 and body components of the BMW i3.

“You can’t just take a torch to the body and scrape the frame anymore,” Blake Zuidema of ArcelorMittal said.

Nobody is quite sure

Just as you’ve got a lot of questions, so do materials engineers at automakers and suppliers. Which material will “win” — probably high-strength steel on small cars, aluminum on larger vehicles, but both playing a part — how you can best join it are being studied. Likely also under consideration are how to keep lighter cars from delivering a crummy ride and when fuel economy standards become the powertrain guys’ problem.

Another concern: Convincing consumers that it’s worth paying more to buy and maintain a car made of something other than cheaper, heavier steel. But with reliability and fuel efficiency tying for No. 1 most important thing to consumers, according a Ducker Worldwide analysis of a Synovate survey, there seems to be the attitude that “It’s okay to pay more for fuel savings,” Abey Abraham of Ducker said.

Again, the feds want it and customers want it, so OEMs have to do it and repairers had better be ready for it — and the fight to recoup its added costs in equipment and preparation.