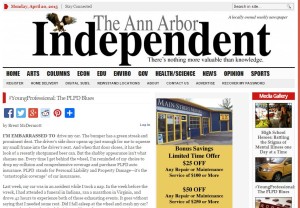 On the lighter side but offering a nice argument to counter anyone who doesn’t want to buy collision insurance comes a recent column  by “#Young Professional” writer Brent McDermott.

McDermott, who writes for the Ann Arbor, Mich., Independent, laments his lack of collision and comprehensive insurance in a Monday piece:

His first paragraph offers a humorous recap of the consequences:

The bumper has a green streak and prominent dent. The driver’s side door opens up just enough for me to squeeze my small frame into the driver’s seat. And when that door closes, it has the look of a recently shotgunned beer can. But the shabby appearance isn’t what shames me. Every time I get behind the wheel, I’m reminded of my choice to drop my collision and comprehensive coverage and purchase PLPD auto insurance.

Now the Independent isn’t exactly the Detroit Free Press — it’s not even the main Ann Arbor paper — in terms of local circulation. However, it’s featured on Google News, which means the rueful column will be visible and able to influence others across the country.

Or you can just forward it to your friends, kids and kids’ friends who are debating what insurance to buy. It’s humorous and relatable, and it might sway a few young minds into practices that could help them and the collision repair industry.

A friend from another state borrowed the car and sideswiped another vehicle in Ann Arbor, Mich., McDermott writes. The columnist has been ducking going to a collision repairer despite his friend’s offer to pay the repair cost out of the fear that his friend can’t cover the bill.

“I can’t shake a cartoon image of myself, ten years younger, a fuller head of hair, looking into a crystal ball, seeing a 30-year-old driving a battered Chevy Aveo, and asking, ‘What the f@#$ happened?'” he writes.

His insurance rates were high because of a series of youthful indiscretions including speeding tickets and a DUI, and he didn’t pursue the collision coverage his sister, who loaned him the money to buy a car, had told him to get. (It’s unclear if he later did and dropped it — as the introduction indicates — or never got collision at all.)

Lesson learned: “But, the older I get, the more I realize how necessary it is to avoid shortcuts. Amassing a rainy day fund on a fixed income is challenging. But the more shortcuts in life that I take (like having PLPD insurance), the more frequently I get rained on, and I never seem to have an umbrella.”

Featured image: Brett McDermott, who writes for the Ann Arbor, Mich., Independent, laments his lack of collision and comprehensive insurance in a Monday piece that can be seen in this screenshot. (Screenshot from www.a2indy.com)