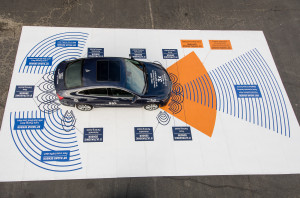 Saying he was “hopeful” but not positive a document could be ready by the 2016 SEMA, an electronics expert said a group is working on best practices to tell a vehicle repair was satisfactory technologically as well as physically.

A vehicle might look good as new, but the slew of sensors, cameras, electronic controls — and now, the brains to drive itself — might be far from it following a repair or modification. But the aftermarket lacks a concrete methodology to vet this, according to John Ellis of Ellis & Associates.

This issue has manifested in the battles between insurers and collision repairers over whether calibration and pre- and post-repair scans are necessary — even when the “dashboard light isn’t on.” Even when OEM procedures exist, disputes can and do still occur.

“The world of repair has traditionally been a very visual world,” Ellis, who has worked for companies included Ford and Motorola, said on a Guild 21 call last week. (See slides.)

Electronics have been treated on a swap-out-the-part basis, restoring the car’s internal and external appearance but not necessarily the functions of its brain and nervous system.

“The problem is is that we don’t really have definitions of (electronic) vehicle readiness,” he said.

Essentially, you know if a car is of sound body, but you don’t know if it’s of sound mind. It’d be like fixing a broken wire on a computer with a virus — the machine’s electronics look good as new but definitely aren’t.

“We are a far cry from where we are at in the physical world in terms of the electronic world,” Ellis said.

Fortunately, some have recognized this problem. A taskforce assembled during the 2015 SEMA Show to develop a vehicle electronics program similar to SEMA’s Vehicle Dynamics Program. The latter examines how different aftermarket products interact with vehicle safety and federal standards.

Though the task force hasn’t committed to finish its work by the SEMA 2016, Ellis said it still might be a possibility.