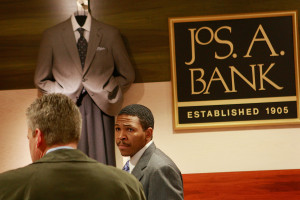 Editor’s note: From time to time, Repairer Driven News features pieces by prolific national columnist Gene Marks. While despite not being directly related to collision repair, they should still prove valuable to the small-business owners and employees which make up much of the industry. Here’s an interesting take on retail pricing.

A few times a year, whenever I need a new suit or button-down shirt, I go to a Jos. A Bank store near my home. I have no complaints. The selection is good. The salespeople are knowledgeable. They have an in-store tailor that’s part of the deal. To me, it’s the go-to place for a guy who needs clothes for work. So why are they losing so much money?

In its recent earnings release, the chain’s parent Tailored Brands said it will shut 80 to 90 Jos. A. Bank stores, 58 Jos. A. Bank and Men’s Wearhouse outlets and 100-110 Men’s Wearhouse Tux stores. The company’s operating loss was more than $1 BILLION for both the quarter and the year amidst a 31 percent decline in sales at Jos. A. Bank last quarter alone.

It doesn’t make sense to me. There are millions of men who work in offices and other professional spaces every day. Granted, dress codes have relaxed over the years. But professional attire is still required at most businesses. Dress pants, button-down shirts, sport jackets, ties and suits are still the norm in most business environments.

Designer clothes are too expensive. Sure, department stores and big-box retailers like Target or Walmart also sell work clothes. But Jos. A. Bank and Men’s Wearhouse just seem to be a natural place for a guy to go to get his clothes for work. How could the company lose a billion dollars? In one quarter?!

A few reasonable explanations are given. Boring styles. Online competition. The changing tastes of Millennials. Too many stores cannibalizing each other, ala Radio Shack. These are all factors. But they’re not the biggest factor.

But as I see it, the biggest factor is the company’s discounting. The clothes there are too cheap.

Yes, too cheap. The last time I went to a Jos. A. Bank store to buy a suit, the salesperson told me that they were running a special sale and for every suit I bought,

they would give me two additional suits. I didn’t need three suits. I only needed one suit. And yet there I was, needlessly picking out two more suits. It seemed unbelievable. Was this a “Saturday Night Live” skit? Apparently, yes:

And it goes on all the time at Jos. A. Bank. In fact — it still goes on. As I write this, Jos. A. Bank is still running insane discount programs. Today on their website, suits that are “regularly” $795 are selling for $199. And if you buy one, you still get two free! I just bought two travel dress shirts because one cost $79.50, but if you buy one you get one free!

Management knows this.  Since Tailored Brands purchased the Jos. A. Bank chain for $1.8 billion a couple of years ago, they’ve struggled to change the company’s long-time-heavy-discounting pricing approach.  So why am I still being offered $795 suits for $199 when the company is losing a billion dollars?  Doesn’t seem like management is acting fast enough.

As a customer, you know how this makes me feel? It makes me feel stupid. Stupid because I’ve purchased full-price shirts from them before, and now they’re giving them away. Stupid because now I wonder how much they must be profiting from me if they can be offering such huge discounts (OK, I’ll admit it’s probably not very much, given the news reported above). Stupid because I’m made to feel that unless I closely watch out for these huge promotions, I’m going to overspend.  Stupid because, as a typical Jos. A. Bank business/professional customer, I’m busy and don’t have the time to become an expert in the store’s sales programs to maximize my spend.

If there’s anything to be learned from the mismanagement of Jos. A. Bank, it is that discounting is stupid. It devalues your products and services. It creates confusion. It drives away customers like me who hold back on buying because I’m waiting for a promotion where I’ll spend less money with them or just give up and buy from somewhere else that’s selling a little cheaper.

I get it that some retailers like to hold special sales once in a while, and that’s fine. But to do it as frequently and pervasively as Jos. A. Bank is a bad practice. It’s 2016, for God’s sake. I don’t offer a “three hours for the price of one” discount program to our service clients. A distributor of industrial bolts doesn’t offer a special “two-for-one” discount on industrial bolts for President’s Day. Even my most profitable clients that sell B2C limit their promotions.

Management at Tailored Brands will need to act much faster on its plan to cut back on the company’s aggressive promotions. Yes, they will lose customers who are used to the deals. But really, were these profitable customers?  Wouldn’t it be better to make the buying experience better for all customers?

Here’s a hint: Whether you’re a nationwide chain or just a Main Street merchant, just consistently sell quality products at a reasonable price and stop with all the crazy promotions. Otherwise you, too could lose a billion dollars.

Reggie Woods, right, helps a customer with a purchase at a Jos. A. Bank store March 18, 2009, in Chicago. (Scott Olson/Getty Images News/Thinkstock file)