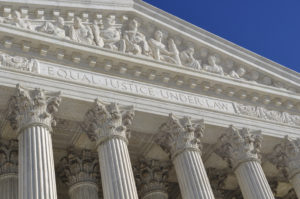 Though the case might not have had much effect on collision repairers, the industry — particularly dealership shops — might still be interested to know the Supreme Court has kicked a somewhat high-profile service advisor OT case back to the Ninth Circuit.

The Ninth Circuit Court of Appeals had ruled in March that dealership service advisers must be paid overtime.

Service advisers paid on commission (not hourly) at Encino Motorsports in California had sued the company for overtime, arguing in Navarro et al v. Encino Motorcars that they still deserved the extra compensation under the Fair Labor Standards Act.

The Mercedes dealership advisors said their job entailed meeting vehicle owners, figuring out what the motorists’ complaints actually mean for repair, write up an estimate and try to solicit other work on the vehicle then and with phone calls to the owner. The Central District of California had ruled that meant the advisers counted as “any salesman, partsman, or mechanic primarily engaged in selling or servicing automobiles,” which are exempt from overtime rules under the law.

It also dismissed the plaintiffs’ California law argument too.

But the Ninth Circuit reversed both of these decisions, though it agreed with the District Court in favor of the dealership on other allegations made in the lawsuit.

The Supreme Court, in a 6-2 decision Monday, ruled that the Department of Labor provided no solid explanation for why it abandoned a policy in place since 1978 regarding which dealership employees received a federal exemption (one not allowed unaffiliated shops, by the way).

In 2011, the DOL decided that service advisers weren’t exempt, and the court — even dissenting Justices Clarence Thomas and Samuel Alito — ruled that it seemed to have made that call on a whim.

“In light of this background, the Department needed a more reasoned explanation for its decision to depart from its existing enforcement policy,” a summary of the court’s opinion declared. “The Department instead said almost nothing. It did not analyze or explain why the statute should be interpreted to exempt dealership employees who sell vehicles but not dealership employees who sell services. This lack of reasoned explication for a regulation that is inconsistent with the Department’s longstanding earlier position results in a rule that cannot carry the force of law, and so the regulation does not receive Chevron deference.”

It concluded the Ninth Circuit should reconsider the case, this time essentially taking the DOL’s new stance with a grain of salt when doing so.

Thomas and Alito agreed, but dissented as they felt the Ninth Circuit was reading the Fair Labor Standards Act wrong anyway. It states:

Dissecting the grammar with an intensity that’d make their English teachers proud, they conclude:

But the distributive canon is less helpful in cases such as this because the antecedents and consequents cannot be readily matched on a one-to-one basis. Here, there are three nouns to be matched with only two gerunds, so the canon does not overcome the exemption’s plain meaning. Perhaps respondents might have a better argument if the statute exempted “salesman or mechanics who primarily engage in selling or servicing automobiles.” In such a case, one might assume that Congress meant the nouns and gerunds to match on a one-to-one basis, and the distributive canon could be utilized to determine how the matching should occur. But that is not the statute before us. For the reasons explained, supra, at 3–4, the plain meaning of the various terms in the exemption establish that the term “salesman” is not limited to only those who sell automobiles. It also extends to those “primarily engaged in . . . servicing automobiles.”

In any case, as a California auto body labor attorney explained in April, the case might not matter all that much to shops — or even dealerships.

“Quite frankly, the Navarro case only has significance for a very narrow group of repairers — dealerships that are (1) located within the 9th Circuit (Alaska, Arizona, California, Hawaii, Idaho, Montana, Nevada, Oregon, and Washington); and (2) that rely exclusively on the 13(b)(10)(A) exemption to classify their service advisers as exempt from overtime,” Cory Farley of Fine, Boggs & Perkins wrote in a guest column. (Note: All of his analysis was provided for informational purposes — it was not intended as legal advice.)

Shops instead might want to take away another lesson from the case: Dealership repairers have an special OT exemption, and non-dealership shops don’t. (However, the federal 7(i) exemption — found here as 207(i) — mentioned above applies equally to both employers.)

“This difference is very important because, for example, a collision repair estimator employed by a dealership may qualify for the commissioned sales exemption, but the estimator at the non-dealership shop across the street (doing exactly the same work) will not have that exemption available,” King wrote.

The same disparity was noted during an Automotive Service Association webinar Wednesday on an entirely different overtime rule that will affect many shops.

“You don’t have that blanket exemption,” Cowles & Thomson Employment Law section head Brian Farrington pointed out. (Note: All of his analysis was also informational, not legal advice.)

Asked if there was any way to receive a similar exemption, Farrington said it would take a “massive, sustained lobbying program.”