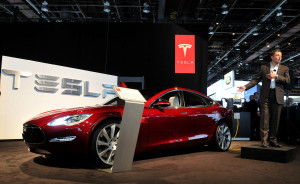 Tesla’s Autopilot has posted its first fatality, the first seemingly ever reported in a vehicle with that level of autonomy.

The crash involved a tractor-trailer and a Tesla Model S, the OEM wrote Thursday on its blog. It called itself “beyond saddened” at the loss suffered by the driver’s family.

“He was a friend to Tesla and the broader EV community, a person who spent his life focused on innovation and the promise of technology and who believed strongly in Tesla’s mission,” Tesla wrote.

Tesla reported the incident to the National Highway Traffic Safety Administration, and the agency has opened a “preliminary evaluation.”

“What we know is that the vehicle was on a divided highway with Autopilot engaged when a tractor trailer drove across the highway perpendicular to the Model S,” Tesla wrote. “Neither Autopilot nor the driver noticed the white side of the tractor trailer against a brightly lit sky, so the brake was not applied. The high ride height of the trailer combined with its positioning across the road and the extremely rare circumstances of the impact caused the Model S to pass under the trailer, with the bottom of the trailer impacting the windshield of the Model S. Had the Model S impacted the front or rear of the trailer, even at high speed, its advanced crash safety system would likely have prevented serious injury as it has in numerous other similar incidents.”

We asked Tesla for clarity on how it knew the driver didn’t see the truck.

Brown died May 7 at age 40, an obituary in the Akron Beacon-Journal cited by the Associated Press stated.

In April, he posted a YouTube video in which he credited a Tesla Model S for avoiding a collision.

“Tesla Model S autopilot saved the car autonomously from a side collision from a boom lift truck,” wrote Brown, the owner and founder of Nexu Innovations. “I was driving down the interstate and you can see the boom lift truck in question on the left side of the screen on a joining interstate road. Once the roads merged, the truck tried to get to the exit ramp on the right and never saw my Tesla. I actually wasn’t watching that direction and Tessy (the name of my car) was on duty with autopilot engaged. I became aware of the danger when Tessy alerted me with the ‘immediately take over’ warning chime and the car swerving to the right to avoid the side collision.”

Tesla stressed the NHTSA’s inquiry is preliminary. It noted that drivers are informed of both the beta nature of the technology and need to keep their hands on the wheel and prepared to take over a vehicle immediately.

“The system also makes frequent checks to ensure that the driver’s hands remain on the wheel and provides visual and audible alerts if hands-on is not detected,” Tesla wrote. “It then gradually slows down the car until hands-on is detected again.”

The OEM also noted that it was the first known vehicle fatality in 130 million miles of Autopilot testing — compared to a 1:94 million rate in the U.S. when humans are driving and 1:60 million worldwide.

“As more real-world miles accumulate and the software logic accounts for increasingly rare events, the probability of injury will keep decreasing,” Tesla wrote. “Autopilot is getting better all the time, but it is not perfect and still requires the driver to remain alert. Nonetheless, when used in conjunction with driver oversight, the data is unequivocal that Autopilot reduces driver workload and results in a statistically significant improvement in safety when compared to purely manual driving.”

The OEM called Brown “a friend to Tesla and the broader EV community, a person who spent his life focused on innovation and the promise of technology and who believed strongly in Tesla’s mission.”

The NHTSA has been bullish about self-driving vehicles, viewing them as a means of preventing vehicle deaths and attempting to streamline their testing.

Even though the news is likely going viral — if it hasn’t already — collision repairers probably shouldn’t count on the negative publicity halting development of a technology likely to seriously cut into future crash business. As autonomous vehicles advocates point out, more than 90 percent of collisions are tied to human error; it’s going to be hard for the computers to do worse.