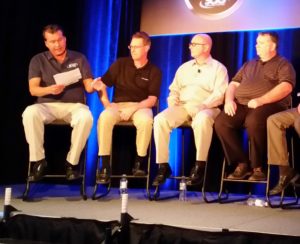 Sending technicians or estimators to OEM training can be an expensive proposition, and it’s important prospective students be adequately prepared, trainers from Jaguar Land Rover, Porsche, Audi and Toyota explained earlier this month.

It’s also important for owners to know who isn’t, according to the educator panel at SCRS’ OEM Collision Repair Technology Summit at SEMA.

For technicians: Foundation of skills — or at least a good attitude

Shawn Hart of Audi said that often technicians aren’t as prepared as they should be for the coursework, or even really know why they’re there, though he said he can get them turned around during the course of the training.

“They need to come up and be ready to hit it hard” for five days, Rick Miller of Jaguar Land Rover said, describing a “zero tolerance” failure rate.

Sometimes, this can result from stubbornness or pride.

And astonishingly enough in 2016, some techs “don’t have basic computer skills,” Mike Kukavica of Porsche said — and some will even tell him, “I don’t have an email address.”

“You have to be able to use a computer,” Kukavica said. He said the computer illiteracy doesn’t happen often, but “when it happens, it’s really difficult.”

Command of English can be an issue as well, he said. He also encouraged external training like ASE and I-CAR testing before a technician walks into Porsche’s class, as Porsche doesn’t conduct a lot of assessment during the course — “we mostly train.”

Meyer also pointed out the need for a foundation of skills before a tech hits OEM training. He said most of the technicians he sees coming through training don’t have the high-level welding skills they need.

Based on that, if shop owners aren’t checking technician welds, “You got a lot of liability running out there.”

Besides the career benefits such education affords, technicians who attend training might benefit from the networking. Hart said techs at Audi’s training often form collegial relationships that can range from assisting each other with repairs to bonding enough to schedule classes together.

“The sharing of information is pretty amazing,” he said. For owners: How to pick technicians

Moderator Barry Dorn of Dorn’s Paint and Body said that as a collision repair shop owner, he thinks strategically about who to send, and he still gets it wrong sometimes. He said he’s sent technicians he’s been unsure about, and they did “fantastic.” Other technicians which seemed like prime candidates proved to be mistakes.

Technology “changes so rapidly” on vehicles, and techs that have been in collision repair the longest often “have the most to learn,” Meyer said.

Hart agreed that younger techs are hungry and want to learn — but of course, you don’t know whether a young trained technician would jump ship, and Dorn agreed that was indeed a concern.

(There are two counterarguments, of course: Research indicates training boosts retention, and the famous exchange: “What happens if I train them and they leave?” “What if you don’t and they stay?”)

Miller advised owners look for technicians with not only aptitude but also soft skills like passion.

“If they’re passionate … they’ll learn it,” he said.

It’s important to consider the technician’s wishes as well, according to Hart. He recalled a student whose boss declared him to be the other aluminum expert for the shop. “He didn’t really want to be the aluminum guy,” he said. The tech passed Audi’s course, but was scared to go, he said.

Kukavica cautioned that an owner should remember for Porsche to pick multiple technicians — the OEM’s certification requires four employees with various qualifications.

Kukavica also told owners to consider sending more technicians than the bare minimum — after all, what happens if one of those four leaves? Lose your qualified staffer or staffers, and certification could be in jeopardy. (Not to mention liability.)

Also, if owners actually “could read the information we give you” prior to the course, that’d be a big help, Kukavica said.

Estimators: You can go too

Owners might also want to send an estimator along for the ride.

Kukavica says Porsche also accepts estimators nominated to attend its body technician class. He said he’s thought about developing and estimator-specific course, but has been dissuaded by estimators and owners who appreciate the depth of the body class.

Hart said Audi also accepted estimators into their body classes (he might grade them a little easier, he said) and let them work with the tools as well.

It helps estimators understand what the technicians are really dealing with in the back of the shop, according to Hart.

“A lot of what we teach is repair planning,” Meyer said.

From left, Gary Wano of G.W. and Sons asks a question while Shawn Hart of Audi, Mike Kukavica of Porsche and Rick Miller of Jaguar Land Rover listen during an OEM trainer forum on Nov. 3, 2016, at SEMA. (John Huetter/Repairer Driven News)

From left, Aaron Schulenburg of SCRS introduces the panel: Gary Wano of G.W. and Sons, Shawn Hart of Audi, Mike Kukavica of Porsche, Rick Miller of Jaguar Land Rover, James Meyer of Toyota and Barry Dorn of Dorn’s Body and Paint, during the an OEM trainer forum on Nov. 3, 2016, at SEMA. (John Huetter/Repairer Driven News)