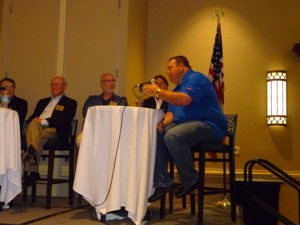 Most importantly, CCC itself, which refused to appear along with a task force of what seemed to be CCC Secure Share opponents. The estimating service had cited antitrust concerns, arguing that the primary concern seemed to be its $0.50 per vendor, per repair order charge.

However, while the economic impact was raised, the discussion Thursday also heavily focused on CCC’s terms of use for vendors and the impending inability of a shop to transmit data conveniently to parties who aren’t on Secure Share. And CIC leadership aggressively cracked down on dialogue which (likely inadvertently) seemed to risk antitrust-violation territory. Both of these factors suggest that the estimating service could participate in precisely the type of forum set up to discuss industrywide issues such as Secure Share, particularly if the task force agreed not to raise its price concerns and solely have a conversation about the other fears.

“They should be here,” Society of Collision Repair Specialists Executive Director Aaron Schulenburg. “They should be in the room.” He also pointed out how seriously CIC took antitrust compliance.

“Right now, this is not going to get us anywhere closer to a resolution,” Automotive Service Association President Dan Risely said of CCC’s absence. He offered to host a meeting of the panel, CCC and other interested parties, though it was pointed out that CCC has offered to meet with the panel.

CCC did also provide answers to questions posed by the task force, and the Q&A was available for review by all of the CIC audience.

Asked about the possibility of future participation, a CCC spokeswoman issued the following statement:

Our position has not changed. We are as concerned as before given the focus on competition and pricing that we have seen in questions from the panel to date. As we’ve shared previously, CCC has invited the task force to meet with us so we can share more about CCC Secure Share as well as hear and respond to their concerns. We have not yet been taken up on our offer. However, CCC has recently been invited to join the task force conference calls going forward. Lastly, CCC has been transparent in our approach and taken many steps to help educate the industry on BMS and the CCC Secure Share network including, issuing many public statements, meeting with app providers and repairers, launching a dedicated CCC Secure Share website, and conducting frequent interviews with media.

Two other interests were notably absent from the public forum.

One was the OEMs. “This has enormous impact for a car manufacturer,” task force member and Assured Performance CEO Scott Biggs said.

And more importantly, based on the conversation Thursday: insurers. If vendors pass along the $0.50 costs to shops — and information from repairers on the panel suggested this could collectively mean $4.50 to $5.50 per repair for them — shops might have to pass hundreds, if not thousands of dollars, in costs to carriers and customers annually.

But as task force member Brett Bailey (A&B CARSTAR) pointed out, DRP mandates related to information providers limit a shop’s ability to exercise the free-market solution of switching to a competitor of a company with whom one disagreed.

“It’s not an option for the average store that’s out there,” Bailey said.

And an insurer’s rules on IPs matter even for shops without a DRP, Bailey said, noting that he has to fight hard to get a supplement recognized if he uses an estimating service other than the insurer likes.