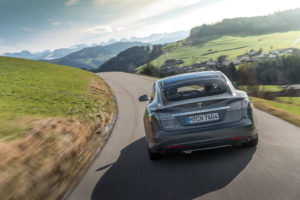 I-CAR has posted an extensive collection of Tesla’s auto body repair documents for technicians, and while it’s not a substitute for collision repair procedures and tech notes sourced directly from the automaker, it’s still a great Tesla primer ahead of the completion of the first edition of the mass-market Model 3 this week.

Some of the documents I-CAR collected are publicly available for free on Tesla’s service site, but others appear to otherwise be buried behind Tesla login and paywall, available only to certified repairers or shops located in Massachusetts.

So the Repairability Technical Support portal aggregation might be the most comprehensive way for those considering Tesla certification to review the kind of equipment and care demanded by Tesla’s vehicles.

Model 3 passed all regulatory requirements for production two weeks ahead of schedule. Expecting to complete SN1 on Friday

Tesla CEO Elon Musk tweeted Monday that the company will have a party for the first 30 Model 3s July 28, and it expects to churn out 20,000 of the $35,000-baseline cars every month by December. If all the 300,000-odd global pre-orders were redeemed in the U.S., the car would be one of the nation’s top sellers, according to GoodCarBadCar’s numbers. This means that repairers failing to secure certification could miss out on a significant piece of the market.

No Model 3 tech note documents appeared to be available yet, so you’ll have to content yourself for now with Tesla’s bulletins on the Models S and X — and even its Roadster.

Among the highlights or updates from this year:

Jan. 3: Tesla’s flat-rate time for its body shops and service centers to connect a Toolbox (Tesla’s diagnostic tool) and run an operation is 1 hour, with 0.3 extra hours per operation (such as programming a module) during that time, according to one Tesla document posted on the portal.

Jan. 19: Procedures for disabling Tesla’s high voltage change depending on the generation of the Model S, according to another OEM communique posted by I-CAR.

March 23: Teslas have a lot of sensors, and after April 2016, they added a lot more, another document on the Repairability Technical Support Portal states. The Model S radar sensor relocated in April 2016 to another location on the front of the car as well.

April 3: Tesla now approves of certain welders from Car-O-Liner, Cebora, Chief, GYS, Miller and Wieländer + Schill, it told technicians in another document shared by I-CAR. Previously, Tesla had only approved certain welders made by Fronius and ProSpot. Only certain ER 4145 welding wire is allowed for Tesla MIG welding.

Featured image: A Tesla Model S is shown in this image provided in 2017 by the OEM. (Provided by Tesla)