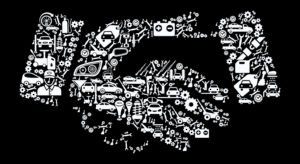 You don’t have to have the clout of a multi-shop operation to negotiate a more favorable deal with a supplier, the Automotive Training Institute’s collision services director said Wednesday.

“You’d be surprised,” said Keith Manich, who will teach “Preparing and conducting Negotiations for Collision Repair Shops”, from 12:30-2:30 Tuesday, Oct. 31, during the SCRS Repairer Driven Education series at SEMA. (Sign up for the class here, or buy the series pass package deal here.)

Many shops don’t recognize they still have enough power to negotiate rather than agree to a supplier’s initial terms, according to Manich, who gave us a taste of his course’s subject matter this week.

“They lose the ability to use it,” he said.

But even a small, independent shop would “still mean something” to the balance sheet of the supplier, according to Manich, who said many of ATI’s nearly 100 collision repair clients had negotiations going on right now.

Shops can also get a deal on paint and materials “if they just ask the right questions,” Manich said. He recalled one shop which increased its existing 30 percent paint and materials discount to 45 percent — with some additional price concessions on top of that.

A shop must have a “proven track record” to succeed in supplier negotiations, Manich said.

“That’s the tool in your toolbag to use against them,” he said. Demonstrate how long you’ve been with the supplier and how much you’ve spent.

But even a relatively new shop might also have a chance at securing a better deal, Manich said. Show how much you spend on their product, that you pay bills consistently and frequently, and don’t owe on your account.

“That’s worth something,” he said.

Even a lack of corrective action requests is valuable to a supplier, according to Manich.

“We do an actual job costing,” Manich said. ATI also tries to estimate the supplier’s financial position as well.

Having a clear understanding of one’s books, even a newer shop can show, “‘Here’s what our spend will potentially be,'” Manich said. A projection of double-digit increases — which Manich said ATI’s coaching can help secure — “that’s worth something to the vendor as well,” he said.

Though he stressed a negotiation based on presenting hard numbers, Manich’s Repairer Driven Education class also covers the art of reading body language in such talks, and he said this still can help in talks with a supplier.

“The soft skills are still quite important,” he said.

The shop must enter the negotiation with some internal benchmarks in mind: its optimal position, a realistic fallback, and the minimum for which it can settle. Once the shop owner or representative knows those three numbers, he or she can proceed accordingly.

“Build yourself a plan,” Manich said. This can be hard for collision repairers, who tend to be passionate people, he said. But “it’s still a math game,” he said.

Manich offered an example of this “math game” when discussing a hypothetical customer whose insurer was refusing to pay for a necessary operation on an estimate. The customer threatens to take their vehicle to the DRP shop down the road who’ll do it at the insurer’s price.

(A brief aside: Manich defined this type of scenario as a “business decision” rather than a negotiation, because “an either-or really isn’t negotiating.” As a shop must perform a quality repair to OEM specifications, “those really are points that aren’t negotiable,” Manich said. Skipping the work isn’t an option — it comes down to whether the shop grants the concession or just sends the car down the road.)

The same type of “math game” goes when negotiating a direct repair program contract. You can only sacrifice so much of your profit margin “before you’re out of business,” Manich said. He quoted the old joke about the clueless businessman who takes a loss on every sale but thinks he’ll make it up in volume.

If you don’t know your sales, costs, fixed costs, and even details like how much time an estimator spends on a car — “that costs you money,” Manich noted — a shop might negotiate beyond its profit margin, Manich said.

He said beyond not being overly passionate, ATI tells clients, “‘Don’t take it personal. It’s simply a math problem.'”

As with a supplier, Manich said a small shop considering a direct repair program does indeed still have the power to negotiate that contract.

“They are all negotiable,” he said.

In his experience, the main thing carriers wanted to get out of the deal was customer service/quality and “how fast can you get it done?”

This could leave other key performance indicators open to negotiation. We proposed a hypothetical scenario where a shop negotiating a DRP seeks to only use new OEM parts but is willing to guarantee the superior fit and delivery will allow the carrier a lower cycle time. Manich said such an arrangement could indeed perhaps be worked out, perhaps if the shop agreed to pay a penalty if they started missing the lower KPI.

“Those kind of (customized) deals are all over the place,” he said.

You don’t have to have the clout of a multi-shop operation to negotiate a more favorable deal with a supplier, the Automotive Training Institute’s collision services director said. (bubaone/iStock)