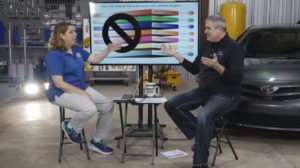 Ideally, glass is joined by urethane to a substrate bearing a coat of epoxy (not the self-etching kind), according to show guest Mark Olson, CEO of Vehicle Collision Experts. (A subscription to the $30 year-long series is required to view the episode.)

“Metal, epoxy, urethane, glass,” Olson said, noting that Toyota even did research for its on vehicles on this a few years ago. (This might be a reference to CRIB No. 127, which makes a similar point.)

You don’t want any basecoat, clearcoat, sealer or body filler between the glass and substrate; all are weak links which could potentially fail in a collision, according to Olson. But that’s how “most shops do it” — and it’s wrong.

“The urethane’s only as good as what it’s attached to,” Olson said.

Some repairers like to cover their welds with plastic filler, but “that’s the strength of your windshield,” he said.

“That stuff (body filler) pops off when you go over the railroad tracks,” Felder joked.

Painters also will apply self-etching primer followed by sealer, then basecoat and clearcoat, Olson said. But if any of these layers separate from one another, “the windshield’s coming out,” he said. Glass primers might be an exception, but Olson said he considered them part of the urethane and a job for the glass company when articulating the “metal, epoxy, urethane, glass” sentiment. Earlier, he noted that 3M sells Single Step Primer for use in glass installation — but he stressed it’s designed to be applied to the glass or for minor touch-ups of corrosion protection on pinchweld scratches, he said.

If a glass company is slathering it all over the place, they’re using it incorrectly, he said.

“3M™ Single Step Primer is designed specifically to promote the adhesion of urethane adhesive/sealants to windshields and other automotive glass applications,” 3M wrote. “This one-part primer is ideal for touching up minor pinchweld scratches and can be used to prime encapsulated glass. ”

The need to forgo basecoat and clearcoat layers underneath the glass can seem counterintuitive to a painter.

“The painters don’t know this,” Olson said, noting that they’re “told to paint everything.” But that wouldn’t be correct in the case of glass flanges, he said, later presenting a photographic example of a painter’s “really super-clean job” where everything but the glass application area had been refinished.

Felder noted that paint warranties will demand refinishing to the panel edge, but Olson said that the area to be left bare metal (except for epoxy and ecoat) wasn’t visible — it was where the urethane would be applied.

“Nothing there,” Felder said, and Olson agreed.

As for epoxy, a lot of shops are probably doing that one wrong as well, according to Olson.

He encouraged collision repair facility owners to walk into their paint department and see how much epoxy exists there.

“What we find is generally speaking, there is no epoxy in most collision repair shops,” he said.

The misconception is that epoxy was something used to address rust decades ago, according to Olson. Or painters mistakenly equate self-etching primer with epoxy. If there is epoxy, it’s perhaps under a layer of dust, unused.

Olson said he recommends putting epoxy on the substrate and putting tape over it, noting that glass companies “probably love me right now.”

However, tape residue atop the epoxy is a problem and is the kind of thing a painter or prepper/detailer might need to check for and clean before the glass installation, according to Felder and Olson. Olson said that “to be totally safe,” a shop could leave the substrate bare metal, paint the car (presumably masking the flanges to keep it coating-free), and only apply the epoxy after the car comes out of the booth.

“Then we don’t have a tape problem,” Olson said.

There’s no need to remove the e-coat before the epoxy, he said. Just scuff it like you normally would and apply the epoxy.

Typically, glass is joined by urethane to a substrate bearing a coat of epoxy (not the self-etching kind), according to Vehicle Collision Experts CEO Mark Olson on the Nov. 29, 2017, “Repair University Live.” You don’t want any basecoat, clearcoat, sealer or body filler between the glass and substrate — all are weak links which could potentially fail in a collision, according to Olson. This slide was used during the show. (Screenshot from Collision Hub)