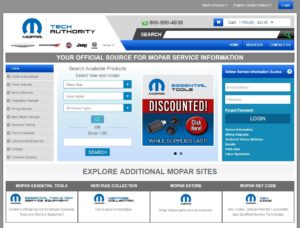 FCA provides auto body repair manuals for free, but charges for all other service and repair instructions — including versions of the collision repair instructions equipped with active hyperlinks for easy references to related procedures. The paid site starts at $24.95 for a day; a year costs $1,800.

Anderson said he preferred the paid version of the website for its interactivity and mentioned that it even included embedded videos illustrating certain procedures. The free site merely features static PDFs derived from the interactive versions on the paid site.

More importantly, many of the necessary procedures for a collision repair — such as disconnecting the battery or removing a door — are housed within the Service Information tab of the paid site, according to Anderson.

Important details like wiring diagrams live there, as do instructions for recalibration. This can include systems you might not have even considered; for example, Anderson showed an FCA diagram for the 2017 Chrysler Pacifica that states that a shop must roll the power windows up and down twice to self-calibrate the system.

Anderson raised the specter of a customer’s pet or child sticking part of their body out the window and “it rolls up on them” because of a shop’s omission.

That information can’t be found on the free site. Anderson also showed information on how to recalibrate the Pacifica’s third-row power folding seats, power liftgate and power sliding door — all found only in the paid site. You’ll also need to pay up for the steps Anderson presented relating to verifying the body control module. (You’ll also notice that these steps require the use of an OEM scan tool or asTech, according to Chrysler.)

Finally, even the instructions on the free repair procedures direct a shop to information which can only be found on the paid site. For example, a passage from the free collision repair procedures on the supplemental restraint system of a 2017 Chrysler Pacifica states:

It seems as though a collision repairer using FCA’s free collision repair procedure website instead of paying for a subscription to Mopar’s complete repair procedure site isn’t going to have the necessary information for a proper repair, based on information presented during a Friday Collision Advice-FCA webinar. (Screenshot from Mopar Tech Authority website, www.techauthority.com)

A FCA diagram for the 2017 Chrysler Pacifica — a document found on FCA’s Mopar Tech Authority paid website — states that a shop must roll the power windows up and down twice to self-calibrate the system. (Provided by Collision Advice, FCA; screenshot from www.techauthority.com)