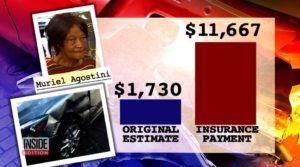 An “Inside Edition” broadcast posted Friday challenges the notion that a photo estimate is an adequate substitution for an in-person appraisal, bringing the issue to the national audience of what CBS called “television’s longest-running, top-rated and most-honored syndicated newsmagazine.”

The piece opens with what “Inside Edition” described as Liberty Mutual and Allstate ads promoting the convenience of photo estimating, including one in which the fictional body shop apparently threw liability to the winds and let three children and a mother wander around the shop floor willy-nilly.

But “Inside Edition” counters this with Mid-Island Collision owner Robert Jesberger arguing that photo estimating is “cheating and undervaluing,” airing footage of him blasting an Allstate adjuster for an estimate being written allegedly to “cheat the consumer.”

“Inside Edition” covered 85-year-old Muriel Agostini, who received an approximately $1,700 photo estimate for what Allstate ultimately agreed was a $11,667 repair.

An email request seeking comment about the report has not yet been returned by Allstate.

The show also features Dennis McCorkel, whose photo estimate for $1,290 was issued in less than an hour. However, Allstate ultimately agreed with Gunder’s Auto Center the car should have been totaled, paying $7,396, “Inside Edition” reported. Ray Gunder told the show that photo estimates underestimated the damage “every time.”

Reporter Lisa Guerrero said collision repairers told Inside Edition insurers know customers will just cash the checks unaware by how low they are or the “safety” and “liability” issues Jesberger said could be overlooked.

Insurance Information Institute media relations Vice President Michael Barry called an estimate “very comparable to what an in-person adjuster” would have produced before being cut off by Guerrero, who states, “that’s not what we found.”

“I would challenge your premise,” he said, arguing that insurers want to put safe vehicles back on the road.

Guerrero summarized customers’ advice as “bring your car to the shop and get an estimate by a
professional who sees your car in person.”

From a theoretical perspective, Barry’s point about the comparability of a photo estimator and a in-person adjuster has merit. Both are equivalent in the sense that neither is a substitute for having the shop write the estimate of record.

It’s unlikely that even an adjuster examining a vehicle exterior in person would produce an initial estimate as accurate as a collision repair professional who’s scanned, measured, torn down and blueprinted the vehicle armed with OEM repair procedures. As Allstate has said, the same supplement process can and does take place under a photo estimate as would occur under a traditional in-person estimate.

The III itself even states:

• The adjuster’s estimate is a benchmark, not a total claim payment. The insurance company will not expect you to accept their adjuster’s estimate until you’ve established to your own satisfaction that it will cover the cost of repair, so don’t feel pressured.

• The insurer will expect you to get at least one estimate from your mechanic, garage or car dealer, to compare to theirs. (Emphasis III’s; minor formatting changes.)

After all, the insurance estimate isn’t meant to be the instructions for fixing the car — that determination (based on OEM repair procedures) and the liability for its outcome falls squarely on the collision repairer.

Instead, the insurance company’s estimate is really only valuable internally. It’s a means for the insurer’s accounting and finance team to gauge how much money they’ll need to set aside to cover the claim.

However, whether it’s responsible or ethical for an insurer to cut a check prior to the true vehicle repair expert — the body shop — evaluating the car’s condition is a fair concern.

Certain customers are probably going to take the money and run regardless of if a desk reviewer, photo estimating AI, human appraiser or auto body repair professional writes the first estimate. But if insurers know some options might lack the accuracy of an estimate written by a body shop or even an in-person adjuster, is it fair to tempt such customers with a check likely to be less than they’re owed?

Worse, if the ability to evaluate whether the car is unsafe to drive — and communicate that information to customers — suffers without an in-person evaluation of the vehicle, is that responsible or ethical? Starbard told the magazine about an appraiser’s story in which “a shop asked the appraiser to take a quick look at a car and just guess the total repair costs. The appraiser guessed $4,000, and the shop showed him the shop’s estimate for about $4,200.”

“But the shop then showed him the original appraisal he’d received, which was written based on cell phone photos,” Starbard told ABRN. “It was for just $450.”

An insurer on the ADALB said a photo estimator could deduce when additional damage could exist and the vehicle should go to a shop, a notion Starbard dismissed as a “perfect world” scenario failing to occur in reality, according to ABRN.

One final point: Shops who do criticize photo estimating should make sure to ensure they’re criticizing the right concerns with the process.

We’re a little confused by complaints by shops that a lack of photo estimating accuracy means they’re “doing the insurer’s job” by having to determine the true damage on a vehicle. A shop — the actual repair professional incurring all the liability — should always be producing its own estimate anyway and work off of that, a legal expert has advised. Nor should they generally rekey an insurer’s estimate, experts advised.

By that logic, the source and accuracy of the initial insurer estimate ought to be irrelevant for a repairer, aside from the KPI hassles it might pose to direct repair program shops obligated to accept and supplement it.

The true concern remains customers being misinformed about vehicle safety and failing to receive the compensation they truly deserve for the loss — the points Inside Edition made to a national audience last week.

“Thoughts on rekeying estimates: Part 1 of 2”

“Thoughts on rekeying estimates: Part 2 of 2”

An “Inside Edition” broadcast posted Friday challenges the notion that a photo estimate is an adequate substitution for an in-person appraisal, bringing the issue to the national audience of what CBS called “television’s longest-running, top-rated and most-honored syndicated newsmagazine.” (Screenshot from “Inside Edition” video)

CCC’s 2018 “Crash Course” shows the small but steady increase in Open Shop usage over the past few years, from barely a hint of a presence in 2013 to nearing parity with independent appraisers in 2017. CCC in a 2018 news release called Open Shop’s current estimate load “a meaningful portion” of all CCC assignments. (Provided by CCC)