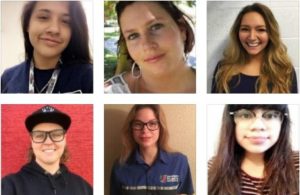 Collision repairers lamenting a tech shortage or a perceived lack of interest in the younger generation in the trade will find succor and inspiration in 2018’s Women’s Industry Network scholarship winners.

The organization this week released bios on the six recipients of a package including a $1,000 scholarship; free Axalta training; a WIN mentor; WIN membership; and a free trip to the WIN conference in Indianapolis, Ind. They are Ashley Cambern of Universal Technical Institute in Houston, Texas; Jennifer Clark of Lincoln College of Technology in Denver, Colo; Yanet Enriquez of Lincoln Tech; Celia Martinez of UTI-Houston; Olivia Parker of UTI-Houston; and Shiloh Taft of Tennessee College of Applied Technology in Livingston, Tenn.

It’s a good showing for both the Universal Technical Institute and Tennessee College of Applied Technology, who each racked up three of the nine honorees. Denver, Colo.-based Lincoln College of Technology produced two other honorees.

Congratulations to the nine winners. Here are the bios of the six main honorees from WIN (minor edits), filled with details that ought to both bring a smile to the face (one started her collision career with marker and paint work on her brothers’ Hot Wheels) and suggest a role in one’s own shop (the woman with a computer science associate’s who’d rather do collision ought to be in particular demand in a time of auto body and electronic complexity). It’ll restore your faith in humanity, or at least in the next generation of collision repair employees: Ashley Cambern attends Universal Technical Institute in Houston, TX. Ashley grew up in Phoenix but relocated to Houston in May 2017 to attend school.

Ashley goes to school each day with the mindset to be her best and excel in her classwork. She has received 4 “Student of the Course” awards for being ranked the number one student within a class course. While exceeding in school, she also volunteers at the local little league football field picking up trash, mowing, painting field lines and helping at the snack bar.

Painting is her true passion. She plans on working at Service King after graduation as a painter’s helper and learning as much as she can. Jennifer Clark attends school at Lincoln College of Technology in Denver, CO. Jennifer’s dad was from Detroit and her mom from a farming community in Tracy, MO. But it was actually her mother that created her love of cars by taking Jennifer to car shows.

Jennifer bought an FJ Cruiser, which she completely tore down and rebuilt. She loves to customize cars and is currently participating in a project to create a Bat Mobile.

Outside of school, she enjoys giving back to her community by working with the Lakewood Police Department and Lakewood Animal Control. Her goal is to work for a fabrication shop specializing in off- road vehicles. Yanet Enriquez also attends Lincoln College of Technology in Denver, CO. Prior to attending Lincoln Tech, she received her associate’s degree in computer science at the Community College of Denver. She felt unfulfilled with her major, so she visited Lincoln Tech. During her visit, she immediately knew that she wanted to enroll in the Collision Repair Program. Yanet has never been more involved or invested in school than at Lincoln Tech! She also is involved with Toys for Tots and the Ambassadors Club.

Once graduated, Yanet would like to learn by working under someone then open a business with her brother, who is a mechanic. They would like to have a collision shop and a mechanical shop in the same building. Celia Martinez attends the Universal Technical Institute in Houston, TX. She and her brothers were raised by her father. Together, they spent a lot of time working on cars. Celia loves custom design and custom colors. Even as a child, she would use pens or paint to fix up her Hot Wheels for her brothers! Celia feels auto collision repair is a great way for her to express herself and use her artistic abilities. Celia volunteers in her community by participating in highway clean up.

Her hope is to pursue a career as a Collision Repair Technician. Olivia Parker attends the Universal Technical Institute in Houston, TX. Olivia has two special needs daughters, Stephanie (17) and Hailey (13). She wants to be a strong role model for her girls.

Olivia states, “I am going to show my daughters that you can work hard and become what you want to be. This is just another way I am being a positive role model for them.”

Olivia has a passion for the auto collision industry. Her main interests are custom body, painting and estimating. Outside of work, Olivia has been a coach for her daughter’s soccer team, helps with the local Girl Scout troop and is a volunteer for her daughter’s autistic class. Shiloh Taft attends Tennessee College of Applied Technology in Livingston, TN. Shiloh was previously working in a factory but realized that she didn’t love what she was doing. She has always loved working on vehicles. She visited TCAT and while looking at the list of careers, saw Collision listed. Shiloh was hooked the first week and knows that this will be a career she can love. She has completed two internships while going to school. During these internships, her time was focused in the paint booth and on paint prep.

Her immediate goals are to graduate at the top of her class, become a certified collision repair technician and find a long-lasting career. Long term, she would like to manage the paint department in a collision repair facility.