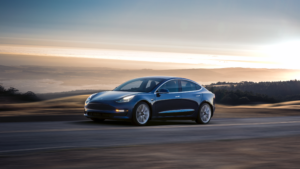 An attention-grabbing Sunday Clean Technica headline on “Here’s What $7,000 Of Damage Looks Like On A Tesla Model 3” leads instead to a reasonable discussion of the nature of modern auto body repair.

It’s actually a great example of how a body shop can educate a customer that what might seem to be “a few hundred dollars, a couple of days in the shop, and I’d be on my way” actually can require a great deal of effort on the shop’s part to achieve pre-loss condition, particularly on an electric vehicle.

Author Chris Boylan wrote that on his “second outing” with his long-awaited Tesla Model 3, he made a “bonehead move” and “accidentally clipped a parking sign.” (He notes that he was a little annoyed by the vehicle’s “arsenal of cameras and sensors” failing to notice it, though a look at the Tesla manual suggests this complaint might be an example of a driver misunderstanding how their ADAS actually works and its limitations.)

“But I shrugged it off and thought, ‘no big deal,'” Boylan wrote in Clean Technica. “It was, after all, just a 4-inch dent on the front left fender. How much could it cost to repair? The answer would be shocking (to me, at least — you already know from the title of the article).”

Tesla-certified Precision Autoworks — which Tesla itself used to fix a paint chip on the vehicle prior to delivery — explained that the complexity of the color and need to blend drove the repair to $6,789.77.

The body shop folks explain, “With the type of damage your car sustained and the materials involved, we could not repair the fender but had to order a replacement. Also, the specific color of your car we call Electric Blue and it uses a special process that requires 3 layers of paint and primer. And to match it precisely with the surrounding body means that we have to blend the paint on these surrounding panels. And all of this takes time and paint.” …

But more complicated and labor-intensive than the painting is the “R&I” — short for “Removal and Installation.” To repair this fender apparently requires removal and reassembly of much of the left side of the car, including all of the trim pieces, moldings, and the driver’s mirror, as well as the front bumper. And when you reinstall the front bumper, you also have to “aim” (re-calibrate) the front distance sensor. The repair also required disassembly of the rear seats in order to access (and disconnect) the high-voltage battery connectors. Apparently, they do this so as not to electrocute the folks working on the car (always nice to not kill anyone).

Author Chris Boylan notes that other luxury vehicles have a similar three-stage paint process, though it’s important to note that this trend might spread to mass-market vehicles as well (which the Tesla Model 3 ostensibly is); it’s already an option for low-cost Mazdas, for example.

The account of the repair is particularly noteworthy in that insurer Liberty Mutual largely agreed with the shop’s assessment, despite an early estimate that was apparently somewhere around $0:

I decided to file a claim and asked the body shop folks to coordinate the repair with my insurance company. After a few days without any meaningful updates, I asked my insurance company (Liberty Mutual) what was the hold-up. The claims specialist told me, “Well the shop’s estimate was a bit higher than we expected.” How much higher? “Nearly $7,000, of which $5,000 was labor.”

Liberty Mutual appears to have attempted to seek a $49/hour rate for a $125/hour shop, which Boylan notably portrays as absurd for the New York City area:

Another factor that should be considered here is that everything in New York City is expensive. The shop’s labor rate is $125/hour, which is a bit on the high side for body work, but in New York City, it’s difficult to find a body shop charging less than $75/hour. Liberty Mutual only allots $49/hour for labor, which is lower than I’ve ever seen in the city. As for Precision’s rates, a wall full of awards and a bay full of luxury cars (many of which were Teslas) in various states of repair suggest that they are earning them. They certainly had no shortage of business. And the results speak for themselves.

The average New York state labor rate on Mitchell estimates — which don’t distinguish between contractually deflated DRP labor rates, rates offset by an inflated line item elsewhere on the estimate (more on this scenario shortly) or door rates — was $49.38 in 2017, according to Mitchell. CCC, which doesn’t distinguish between such labor rates either, found the national auto body rate to be $48.85 last year. Liberty Mutual’s final estimate came out at $6,256.28, indicating agreement with the shop’s assessment. As Boylan alluded in the comments section on the post, the insurer’s estimate lists $49/hour paint, body and mechanical (!) labor rates and knocks down the paint materials rate from $34 to $27 — but increases the “miscellaneous” line item from the shop’s $25 to $2,752.20.

I didn’t post the entire appraisals, in either case, just the summaries. I have a feeling that the “Miscellaneous” on the insurance company’s appraisal was an accommodation on the quoted rate of $49/hour, to bring it closer to the shop’s book rate of $125/hour

Assuming Boylan’s theory is correct, such rejiggering doesn’t seem to provide the carrier, customer and information providers with a very precise estimate, even if the check would be enough to cover the tab. For an insurer, this seems particularly shortsighted, as it obscures data actuaries and claims staff might need to forecast local labor rates, crash severity and an appropriate premium.

As a commentator wrote on Boylan’s article,”Yes, but you don’t just double the price by dropping in the same again in miscellaneous. That sort of percentage needs itemizing.”

A Liberty Mutual spokesman on Monday wrote in an email that the carrier doesn’t discuss details of its customers’ claims. He was checking to see if he could discuss other elements of the Clean Technica story and comments.

The story’s comments section is also a humorous read, showing the erroneous conclusions drawn by apparent laymen and at least one poster who worked in a body shop a while ago and have no idea just how smart and complicated vehicles are today.

As the Tesla Model 3 customer manual itself states:

It also notes that features like Autopilot might not work right if the car has a “A damaged or misaligned bumper.”

Fortunately, more informed parties, including Boylan, contribute comments and debunk the “the shop is ripping you off” crowd. As one wrote:

This really isn’t that outrageous. You whacked the car in about the worst possible spot from the standpoint of trying to blend the repaint. Hitting it high on the front fender means that the splash shield/cover in the wheel well is likely puckered – that rules out body filler. Repainting the entire fender means that you need to blend the paint out at least 3 feet in each direction – that would include the new fender, the hood, front bumper, drivers side door, A-Pillar and side skirts – that requires sanding, primer, base coat, 3-layers of (tricolor) paint and 3 coats of clear coat on each of those body panels.

I have a Mazda6 with the premium light blue tri-coat exterior paint. Due to damage from ice built up in the wheel well that kinked in the fender when I hit a large pothole – that one pothole resulted in roughly $5,400 in body work. Keep in mind that a Mazda doesn’t have any of those fancy sensors to recalibrate either – nor are the parts in limited supply. I’d say you got a fairly common bodywork repair bill for color matching and blending a very complex paint job.

However, some Mazdas actually do have those “fancy sensors” to recalibrate — as do many low-cost modern vehicles. Therefore, this article should provide a good education for adjusters and customers surprised by not just $6,000-$7,000 Tesla repairs but also the higher-cost work potentially needed on a surprising number of mass-market cars made over at least the past decade.

But there’s good news as well that customers and insurers shouldn’t forget while reading stories like this. While Tesla’s technology couldn’t bail out Boylan on this one, research finds that overall, insurers are likely to see fewer accidents — which means fewer $7K repair bills. It’s also possible that the technology itself will mitigate the crash enough to still produce lower severity as well.

A Tesla Model 3 is shown. (Provided by Tesla)