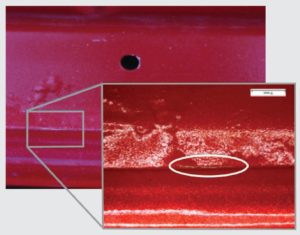 Aluminum Association research into an 2012 factory vehicle hood showing “extensive” filiform corrosion within four years shows the need for repairers and OEMs to be meticulous with the metal.

The report is a bit technical, but it’s short — merely 16 pages of text and photos — and it might save a shop from comebacks, so painters, preppers and body technicians should check it out. With more OEMs using aluminum on vehicles — notably on hoods like that studied by the association — it’s possible customers will see more of this filiform corrosion if an automaker or shop screws up.

Filiform corrosion, which is different than the galvanic corrosion steel-aluminum contact can produce, typically doesn’t pose a “structural or safety concern,” the Aluminum Association wrote in the October 2017 report. However, the corrosion can generate a “‘paint blemish,'” according to the association — which doesn’t seem like a great advertisement for the OEM or the auto body shop’s product.

“(I)t is certainly understandable why the customer would object to such a blemish in a modern vehicle,” the association wrote.

Filiform corrosion derives its name from “fine filaments or worm-like tracks” that arise on an aluminum substrate under a coating like paint that otherwise would have blocked the oxygen, the report states. It and crevice corrosion — caused when something corrosive like salt water is between aluminum surfaces or aluminum and anther substrate — are particularly likely “in wet and salty environments typical of the east coast of Canada or the USA,” according to the association.

“The (filiform) corrosion front is usually at the very surface of the aluminum sheet, under the pretreated surface,” the association wrote. “Once the initial defect is generated, which may be from a stone chip or a paint defect such as a hole or crack in the paint, the corrosion defect begins to tunnel under the paint surface. This is driven by the difference in oxygen between the head of the filament and the starting initiation defect.”

The association also notes that sanding can prompt filiform corrosion, which raises additional considerations for OEMs and aftermarket.

“Sanding or abrading the aluminum surface prior to paint has the potential to make the surface more prone to filiform corrosion since the abrasion process effectively thickens the oxide surface which must be removed prior to the pretreatment,” the report states. “If the etch conditions associated with the pretreatment are set up for the nominal un-sanded surface, the thicker regions of oxide associated with the sanded region may not be completely removed, and as a result, may have non-uniform (zinc)-phosphate crystal growth, or areas of sparse coverage. For after-market repair where parts have been abraded, particular care must be taken to prepare the surface for paint.”

The trade group aftermarket comments might be referring to practices like immediately priming or treating the bare aluminum after sanding it, as PPG describes here. The study also provides an overview of how corrosion protection works — or doesn’t — in hemmed aluminum surfaces at the factory, which should provide a little perspective on what could happen when a collision repairer works on an aluminum hem flange in the shop.

“Special attention must be given to the hem joints, where the outer surface is hemmed over the inner panel, since this forms a natural collection crevice for salt or other debris,” the trade group writes of hoods. “The hinge reinforcements are frequently bolted and can also develop crevices.”

A hemmed surface was Ground Zero for the aluminum association’s study of a 2012 model-year vehicle’s hood “with extensive paint blistering near the hem” after about four years on the road “in the northeastern United States, with proximity to the ocean.”

The alloy used at the time — it’s since been replaced by a weaker but flat-hemmable aluminum alloys — yielded a rope-hemmed hood which the OEM coated in the typical fashion. Nevertheless, issues at the microscopic level sparked corrosion and provide an example of how repairers and OEMs need to think beyond the naked eye when working with substrates and coatings.

The association said the paint blisters tied to filiform corrosion might have come from hem sealer pulling away from the substrate, inconsistent zinc phosphate and adhesive with “a high void content.”

It wrote that the adhesive might have absorbed some moisture or had too much oil left on the formed part.

“As adhesives, even cured adhesives, are hydroscopic, which require special attention to see that the adhesives don’t absorb moisture that can degrade the adhesive or the adhesive to metal interface,” the association wrote regarding the factory assembly process.

Too many voids left in the cured adhesive speeds up how much moisture sneaks in while the car’s on the road, according to the association. The OEM also had applied hem sealer, but it couldn’t fend off corrosion, according to the association:

The moral here is that careful preparation and coating/sealer work is necessary to keep the vehicle from coming back to haunt a shop or OEM in just a few years, as in this case: The study also reported that work is underway to create tests designed specifically for aluminum filiform corrosion, for existing tests might have been too steel-centric.

“It should be noted that all modern vehicles are extensively tested for durability with accelerated proving ground tests, including paint and corrosion preventative measures,” the trade group wrote. “No known examples of filiform corrosion have been observed from these tests. It is rationalized that many of the test conditions that were developed for steel bodied vehicles remain in place since the majority of the body structures contain significant amounts of steel, and because of this, these tests are simply not the conditions needed to promote this particular type of corrosion. Test conditions that are able to better promote, and better quantify effective preventative measures are under development. Care must be taken to promote accelerated conditions that are realistic predictors of service life and service life conditions. Filiform corrosion is particularly difficult to predict through accelerated conditions since the corrosion filament only grows within a narrow range of experimental conditions and at a finite rate. The conditions required to promote filiform corrosion are difficult to promote during typical proving ground tests.”

Hopefully some of that research provides new lessons for the aftermarket as well.

“Analysis of Painted Aluminum Hood and Associated Corrosion at Hem”

Aluminum Association research into an 2012 factory vehicle hood showing “extensive” filiform corrosion within four years shows the need for repairers and OEMs to be meticulous with the metal. (Provided by the Aluminum Association)

Filiform corrosion, which can cause paint blemishes, is shown at left and after paint was stripped away, right. (Provided by the Aluminum Association)