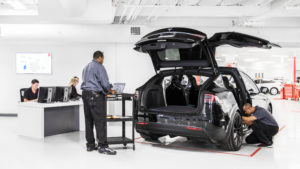 CEO Elon Musk told shareholders Tuesday that Tesla should “by the end of this month” open company-owned body shops in “at least the Top 10 metro areas” and prestock them with parts.

“In fact, we think we might be able to do, for a lot of them, like same-day body repair,” Musk said during the annual stockholder meeting. (Comments start around 44:39.)

The comment drew some applause, and Musk followed up by saying, “It’s definitely possible,” and said the company wanted to have “at least some number” of same-day repairs.

Musk said that with third-party repairs, “best case, it’s about a week, and some cases, it’s several weeks. so this is pretty exciting, actually.”

Tesla would take its largest service centers, add an “annex” for body repairs, and prestock them with parts “so you don’t have to wait for parts to come from the factory,” according to Musk.

Tesla-certified shops have described an inadequate parts supply chain as the true reason for delays in repairs to the company’s vehicles, in contrast to the OEM’s claim that repairer inefficiency is to blame. Tesla funneling parts to its own shops would seem to exacerbate delays at third-party repairers.

Tesla certification and the Tesla auto body repair process will take on greater importance once Tesla works out its manufacturing kinks and can produce Model 3s at scale.

Musk boasted Tuesday that the Model 3 had already become the No. 1 mid-sized premium sedan despite only one version being available. All-wheel drive will come out at the end of the month, and a lower-cost version (likely a reference to the truly mass-market $35,000 edition) with a lower battery life will be available at the end of the year, according to Musk.

Model 3 is now the best-selling mid-sized premium sedan in the USA pic.twitter.com/xI7LsgRI6D

The first-quarter 2018 California Auto Outlook, published by Auto Outlook on behalf of the California New Car Dealers Association using Data Source: IHS Markit, concluded Tesla was No. 1 in the “Near Luxury” segment. As the state is probably one of the most Tesla-friendly in the country, the statistics are interesting — particularly if you’re a repairer there.

Musk called it “quite likely” that the company could turn out 5,000 Model 3s a week by the end of the month. Production lines “have demonstrated” the ability to produce 3,500 cars a week already, and Tesla has upgraded them, Musk said.

Featured image: A Tesla Service Center is shown. The company plans to open Tesla-owned body shops in annexes of some large centers. (Provided by Tesla)