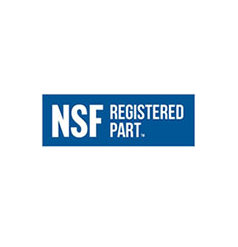 “I would love to be able to certify all these products…but at the end of the day, what the market is saying is we don’t have an appetite for certification,” NSF automotive certification global managing director Robert Frayer said, according to CRASH Network.

“Certified parts are eligible to bear the NSF mark which tells consumers and industry professionals that the part and the manufacturing facility have met the program’s stringent requirements,” NSF’s certification webpage states.

“Registration affords companies an easy, quick and cost effective means to publicly demonstrate compliance to multiple industry standards and regulations,” NSF’s registration webpage states. “Products and services that meet registration requirements appear in the online NSF listings and can be referenced in marketing and other promotional information.”

Whether it’s appropriate to loosen standards and potentially confuse the market so vendors can save money is debatable, particularly given other aftermarket parts industry quality concerns raised by Frayer.

NSF publicly discussed registered parts in April and in 2017, according to CRASH Network, and it has published multiple news releases touting registered parts. However, NSF declined Tuesday to answer questions about the program.

“I have reviewed the inquiry with our team, and NSF has no comment on this question,” NSF senior communications specialist Ken Bearden wrote in an email.

It’s unclear if the trademark could apply to more automotive parts than the rearview “devices,” — backup cameras — mirrors, TPMS technology and brake components. NSF announced its mirror registration in April 2017, a recognition that it said could be granted to mirrors with blind spot monitoring indicators or turn signals. Its first TPMS registration appeared in August 2017, and its debut brake-related registration was announced in October 2017.

“NSF registration allows manufacturers of cameras, such as HUSHAN Autoparts, to demonstrate that their products can be mounted appropriately and have been independently tested and evaluated to comply with Federal Motor Vehicle Safety Standard 111 (FMVSS 111): Vehicle Rearview Image Field of View and Quality Measurement,” NSF wrote in a news release. “The evaluation also includes field-of-view and response-time testing.”

“Certification, Legislation Related to Non-OEM Parts Get Spotlighted at Convention”