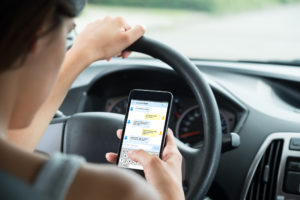 The Insurance Institute for Highway Safety has consistently been finding new vehicle technology more likely to cut collision repairers’ crash volume. However, last week, it gave body shops a little hope by reporting a shift in phone-related misbehavior by drivers.

A 2018 study of Virginia motorists found 3.4 percent of them “manipulating a cellphone,” up from 2.3 percent in 2014, according to the IIHS. According to the IIHS, that makes drivers 57 percent more likely to be futzing with their phones.

“The finding is consistent with research indicating that drivers are talking on hand-held phones less and fiddling with them more often than in recent years,” the IIHS wrote.

“We didn’t find evidence of an increase in distracted driving overall between the 2014 and 2018 roadside surveys,” Highway Loss Data Institute senior research scientist and study co-author David Kidd said in a statement. “For cellphone-related distraction in general, we expect a continued shift in the way people interact with the devices as the technology evolves.”

However, the IIHS also pointed out that shifting from other distractions to a cellphone — and shifting to manipulation rather than talking on the phone — might be more dangerous. 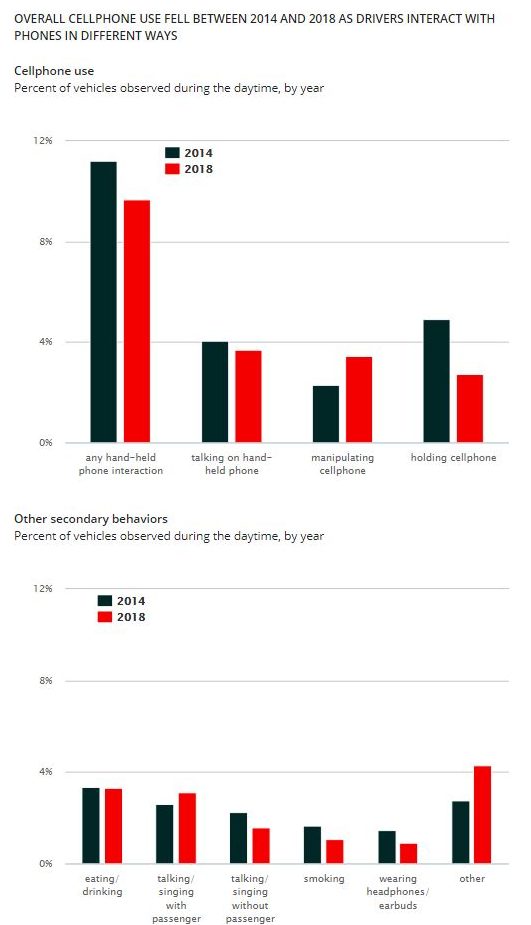 “The latest data suggest that drivers are using their phones in riskier ways,” Kidd said in a statement. “The observed shift in phone use is concerning because studies consistently link manipulating a cellphone while driving to increased crash risk.”

The AAA Foundation for Traffic Safety and the Virginia Tech Transportation Institute reported in a 2018 study that manipulating a cellphone was 66 percent more likely to pose a fatal crash threat than other “secondary behaviors,” according to the IIHS. Presumably, this makes cellphone manipulation more likely to generate nonfatal crashes too.

The AAA-Virginia Tech report did distinguish between talking on a phone and other behavior with it, though those researchers don’t appear to have broken out merely holding a phone like the IIHS did.

“Cellphone use affects how drivers scan and process information from the roadway,” the IIHS wrote. “Drivers generally take their eyes off the road to dial, send texts and browse the web on a hand-held phone — all activities that fall under the rubric of manipulating the phone. Drivers engaged in cellphone conversations tend to concentrate their gaze toward the center of the roadway, but their attention still may be diverted from driving and make it difficult for them to process what they are looking at.”

Ironically, the AAA and Virginia Tech didn’t find talking on a phone was riskier at a statistically significant level.

“An increase in distracted driving has been suggested as a factor contributing to the 15% increase in fatal crashes from 2014 to 2016, but objective information about the prevalence of distracted driving in recent years is incomplete or lacking,” Kidd and coauthor Neil Chaudhary wrote in an abstract for the report in the February 2019 Journal of Safety Research. “… In conclusion, there was no evidence that distracted driving has become more common in recent years, but the prevalence of some secondary behaviors has changed. Most concerning was the 57% increase in the likelihood of cellphone manipulation in 2018 relative to 2014, a behavior that has been consistently linked to increased crash risk; however, because the behavior is uncommon overall, the increased prevalence would be expected to only slightly increase crash rates.”

The IIHS theorizes that since tracking distraction-related deaths depends on people voluntarily handing over their phones to authorities or at least not lying about what was happening, the real number could be higher. On the other hand, there’s probably a case that a comparable proportion of people would have been dishonest and uncooperative in all three years, which might suggest that the decline still means something apples-to-apples.

“Crash Risk of Cell Phone Use While Driving: A Case-Crossover Analysis of Naturalistic Driving Data”

The AAA Foundation for Traffic Safety and the Virginia Tech Transportation Institute reported in a 2018 study that manipulating a cellphone was 66 percent more likely to pose a fatal crash threat than other “secondary behaviors,” according to the IIHS. Presumably, this makes cellphone manipulation more likely to generate nonfatal crashes too. (AndreyPopov/iStock)