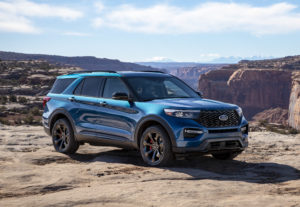 All Ford vehicles this year are to contain modems, and connectivity will eventually lead to a point where the OEM thinks it will be the referral source for auto body shops, “not DRPs,” a representative said Thursday.

“We’ve said that before,” Ford global collision marketing Rob Johnston continued during a VeriFacts Guild 21 call on Thursday. “… I think some kind of like look at us funny, but we believe that.”

“I just tell people, ‘Let’s do this thing together,'” he said.

The OEM’s research found that 52 percent of customers felt choosing a body shop certified by a manufacturer was more important than one conveniently located (7 percent), recommended by the insurance company (20 percent) and recommended by a friend or family member (21 percent).

Ford found those results “really interesting” and somewhat “eye-opening,” he said. He said this led to Ford deciding it needed a better relationship with customers in collision, for “it’s part of the ownership experience.”

He said “much deeper” research indicates those customers ditching their vehicles don’t necessarily buy Fords. There’s a brand loyalty threat to the automaker.

The OEM will “very, very shortly” refer consumers to certified body shops with its FordPass app, according to Johnston, who called it the “next phase” towards offering first notification of loss service. The latter here refers to the notion of automatically detecting a crash and reaching out to help the consumer — such as with a recommendation for a body shop.

Even though Johnston described a future where insurers have reduced influence on customer shop choice, he also raised the possibility of cost-saving efficiency for a carrier.

The initial 20-minute phone call to an insurer to convey basic information about a claim carries a “huge expense,” Johnston said.

“We can help the industry be better together for our customers,” Johnston said. He said the OEM was trying to determine how to do so the “right way” to benefit everyone. The locator was the first step, and Ford would build upon it for FNOL services “down the road.”

Johnston said Ford was talking to insurers about ways to help each other, with “productive work in play” currently.

He said there would come a day “I really hope,” when a direct repair program is “one and the same” with the Ford network. Ford would hope both the OEM and carriers could agree on this and move on to discussing the efficiency of the network.

“We can make this work for both of us,” he said.

Toney said Ford couldn’t go it alone, and neither could insurers. Ford would be the first one to know when the vehicle fails, he said.

It wouldn’t matter who owned the data, he said. The important question would be the process developed.

Customers would go where they could be served, Toney said.

“The worm has turned in terms of who’s gonna control how they get their cars fixed,” Toney said. “It’s coming. So the only thing that’s gonna save all of us is customer experience.”

Connectivity for first notice of loss is “a big deal,” he said. He said he knew stakeholders were worried, and they and Ford should design how to use it with respect to privacy but enhancing the customer experience and building efficiency.

In this vein, we note that Ford’s requirements for certified shops demand the ability to “maintain 10-day key-to-key repair time.” The average DRP keys-to-keys time was 9.9 days in the four quarters ending Sept. 30, 2018, according to CCC’s 2019 “Crash Course.”

The 2020 Ford Explorer ST is shown. (Provided by Ford)