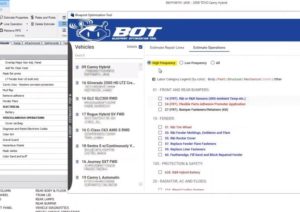 The “BOT” software allows a collision repairer to automatically apply the “SCRS Guide to Complete Repair Planning” to an estimate and identify overlooked items. The “Guide to Complete Repair Planning” includes more than 1,000 operations an auto body shop’s staff might be performing during a collision repair but forgetting to mention on the estimate.

Schulenburg told an SCRS open board meeting July 20 that the software provides a clear summary of which high- and low-frequency operations are absent from the estimate. An extensive repairer customization option lets each shop set labor and dollar values for the suggested operations and declare which ones they view as high- and low-frequency, Schulenburg told an Elite Body Shop Solutions webinar on Tuesday.

“No two BOT reports will ever look the same,” he said.

The repairer can simply copy these individual line items and paste them into the end of the estimate, Schulenburg said on the webinar. The software uses part code table functionality so the pasted estimate lines populate the appropriate part of a CCC estimate rather than putting them all at the bottom of the document, he said. For example, pasting the BOT’s suggestion of a fender liner R&I would cause that operation to appear in the fender section of the estimate.

This sorting could also help avoid arbitrary insurer denials, Schulenburg suggested. He noted that appraisers sometimes just automatically deny manual lines they see added to the bottom of an estimate, dismissing those operations with terms like “‘fluff.'” Grouping those operations into the appropriate parts of an estimate rather than piling them on at the end meant the insurer had to actually review the document to “negate any of those,” he said.

Schulenburg on June 20 said SCRS plans to adapt the tool to work on Mitchell and Audatex as well. “We had to start somewhere,” he said.

“We’re on to the next estimating system,” BOT developer NuGenIT’s Pete Tagliapietra told the SCRS open board meeting. He said the hope is to deliver that expansion by the fourth quarter of this year.

Tagliapietra said NuGenIT planned to release a set of reports to teach collision repairers how their copy of the BOT had been used, what opportunities were being missed and the financial impact of those opportunities.

Many tools hold repairers compliant to some other party’s rules, Schulenburg said during the Elite webinar. But he told the open board meeting he didn’t think another tool like the BOT existed. Certainly not one built by repairers because “what they were looking for for their businesses did not exist out there today,” he said.

Schulenburg told the webinar SCRS had spent much time asking companies to build such a product — it flat-out “gave them the idea,” he noted. But after the trade group failed to receive a “whole lot of bites,” it took matters into its own hands.

The BOT costs nonmembers $139/month for the first computer installation and charges members $99 per month. Schulenburg encouraged shops to become members before subscribing to the BOT — the savings over a course of a year would be more than an SCRS membership, he told the webinar. Additional computer terminals are $29 for nonmembers, $21.75 for members. There’s also a one-time $75 percent account fee per location.

Schulenburg told the open board meeting SCRS received a “great response” in terms of subscriptions to date. “We hope that that continues,” he said. Those who have used the tool have provided “nothing but positive feedback” about how it helped their businesses, he said.

The tool could help repairers achieve consistency among multiple stores or across multiple estimators at the same store, according to Schulenburg. He told the open board meeting it could also help with MSOs that have different estimating expectations between high-line and domestic vehicle facilities.

Schulenburg told the webinar that users also report that the software helps build up a stable of estimators. Anyone interested in becoming a writer can attempt an estimate, then run it through the BOT to see what else could be added.

Luehr called it an “awesome tool.”

For more information about ordering the BOT and billing for the software, call 877-841-0660, email botbilling@scrs.com or visit www.scrs.com/BOT. For BOT tech support and configuration inquiries, call 913-754-5243 or email scrsbotservice@nugenit.com. For more information about SCRS or becoming a member, call 877-841-0660, visit www.scrs.com or email info@scrs.com.

Featured image: A screenshot of the Society of Collision Repair Specialists Blueprint Optimization Tool is shown. (Screenshot from SCRS video)