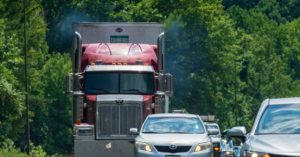 Rear-ending plummeted even further, with FCW causing a 44 percent reduction in such crashes and AEB producing a 41 percent decline.

“This study provides evidence that forward collision warning and AEB greatly reduce crash risk for tractor-trailers and other large trucks,” Teoh said in a statement. “That’s important information for trucking companies and drivers who are weighing the costs and benefits of these options on their next vehicles.”

The IIHS still felt AEB was a “better system” and was emphasizing it, he said.

“The similar benefits of forward collision warning and AEB that Teoh observed for rear-end crashes were unexpected, since studies of passenger vehicles have shown AEB to be much more effective than systems that only issue warnings,” the IIHS wrote. “That could reflect differences in how and by whom trucks and passenger vehicles are driven, or it might be connected to variations among the specific systems used by each carrier.”

Large trucks tend to crash less on the whole, according to the IIHS.

Regardless, the data shows the effectiveness of two ADAS technologies on significantly larger vehicles and suggests a reduction in crashes for both regular and heavy-duty repairers to fix.

Similar to traditional vehicles’ ADAS, the IIHS found the collision warning and autobraking features also knocked significant speed off the truck crashes which did occur.

Teoh also found both systems cut the speed at which the truck rear-ended the other vehicle by more than 50 percent.

“The potential benefits are great enough that these crash avoidance systems should be standard equipment on all new large trucks,” IIHS President David Harkey said in a statement.

Heavy-duty vehicle crashes have risen “by nearly a third” since an all-time low in 2009. However, the U.S. hasn’t mandated or secured a voluntary commitment for truck autobraking the way it had with the 2022 AEB deadline for regular cars. (The European Union has made truck autobraking mandatory since 2013, in case you were curious.)

The speed reduction success seems like it could go one of two ways for the collision repairers fixing traditional private passenger vehicles.

The Insurance Institute for Highway Safety’s most recent estimates on the success of various advanced driver assistance systems. (Provided by IIHS)