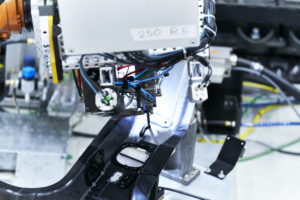 “The aluminum spaceframe body structure of the BMW iX is a first for its segment,” BMW wrote in a news release Nov. 11. “The materials selected and manufacturing processes increase body rigidity and crash safety while keeping weight as low as possible.”

It said these and the carbon-fiber side frame “constitute an effective lightweight design.”

“Unfortunately, I do not have the specific details of the body’s construction just yet,” BMW product and technology spokesman Oleg Satanovsky wrote in an email. “I will need to wait for the full start of communications in 2021 to have access to those details.”

Images of iX production in Dingolfing, Germany, might give some hint of what repairers can expect. 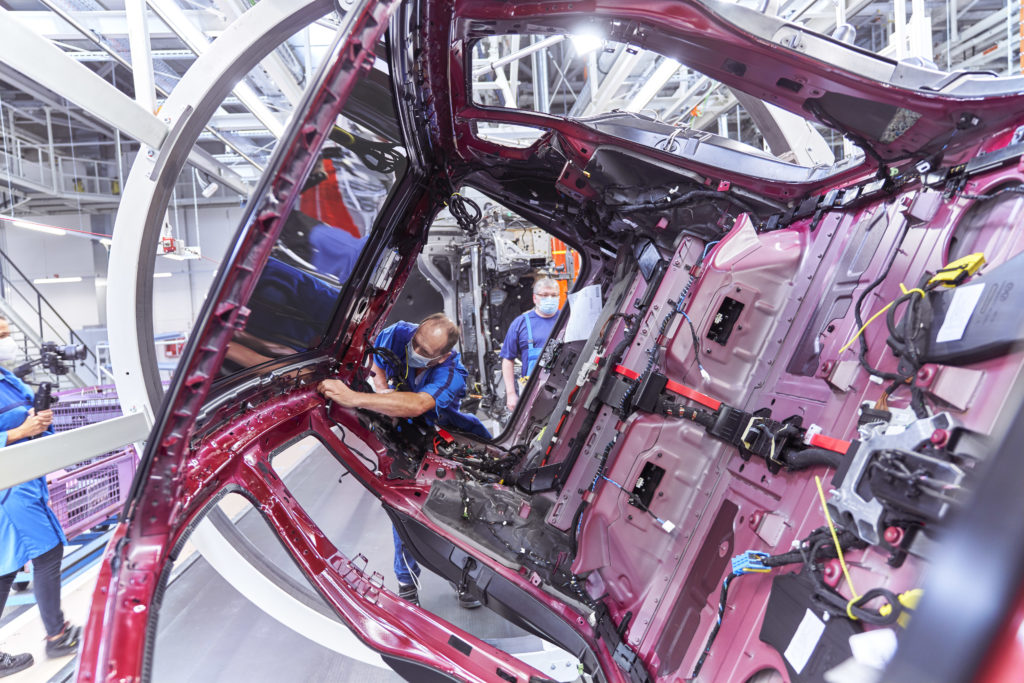 The OEM said the carbon fiber delivered an aesthetic benefit along with its crashworthiness and lightweighting value.

“The CFRP used in the side frame and at the rear end lends an added visual appeal to the BMW iX: the carbon components’ recognizable fiber structures clearly stand out in the entrance area and when the tailgate is open, providing a reminder of the car’s high-tech character,” BMW wrote in release. 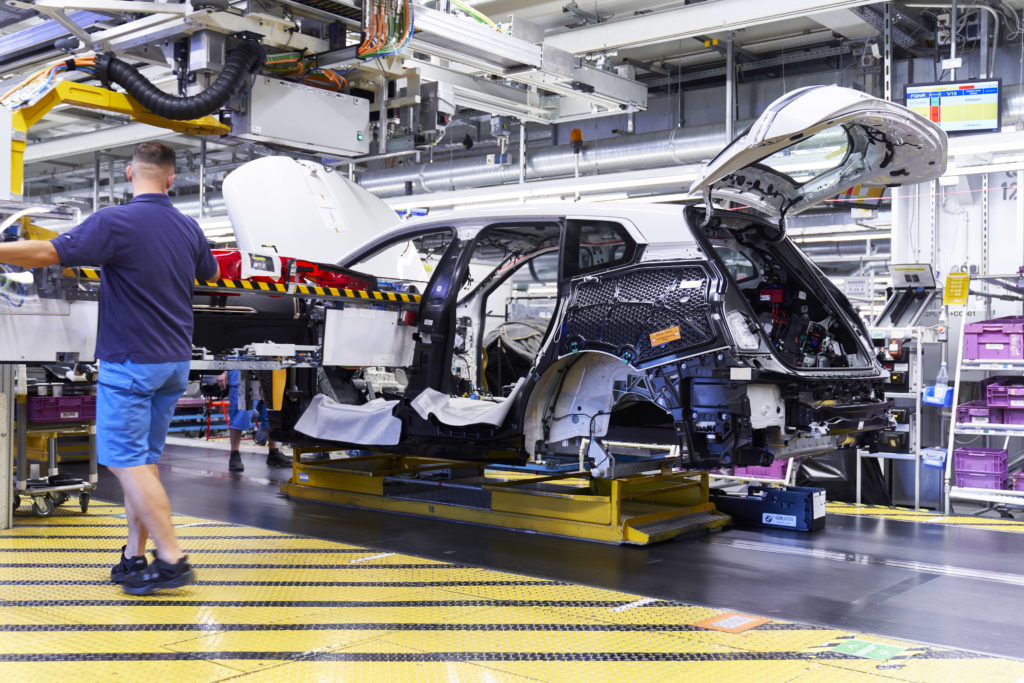 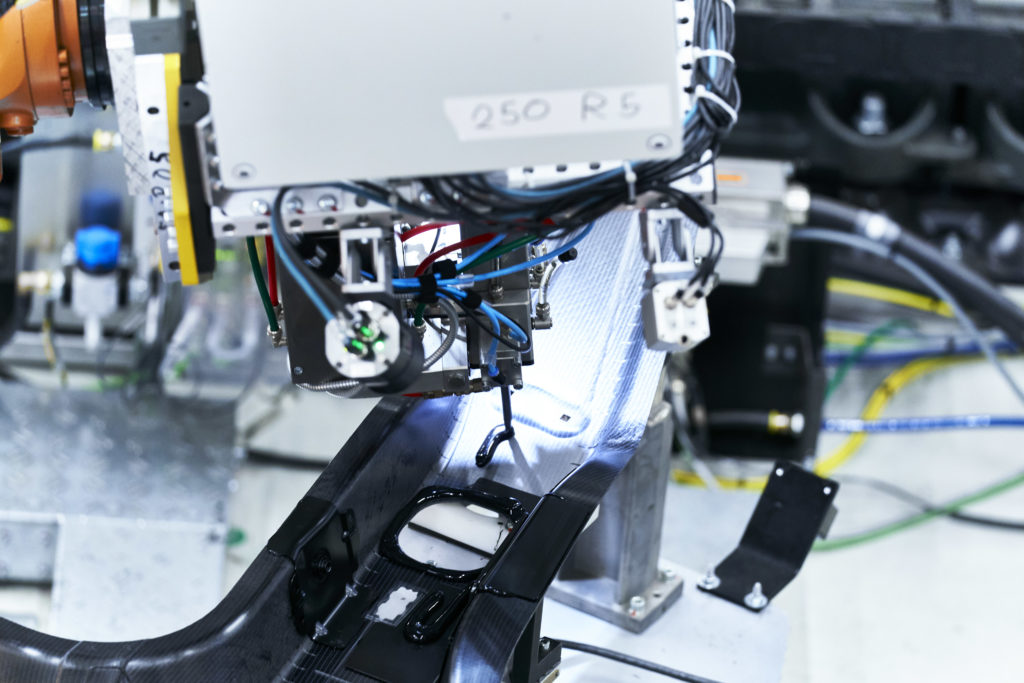 The vehicle body contains several active and passive aerodynamic features repairers should note. According to BWM, the iX has a coefficient of drag of just 0.25, and certain aero elements combine to add more than 56 miles of battery range.

“The aerodynamic elements for the front end, rear end, underbody and wheel areas alone add over 40 miles (WLTP measurement) to the car’s overall range,” BMW wrote. “Some 16 miles (WLTP measurement) of this can be attributed to the third-generation active air flap control at the front of the vehicle, which directs cooling air to the drive units and brake system when required.”

BMW said the electronically controlled front bumper air intakes normally are closed to deliver better aerodynamics. However, the vehicle can open them all the way if it needs maximum cooling airflow.

“The flaps can be adjusted gradually, allowing cooling air to be directed efficiently to the brake air ducts and drive components in carefully metered quantities,” BMW wrote. 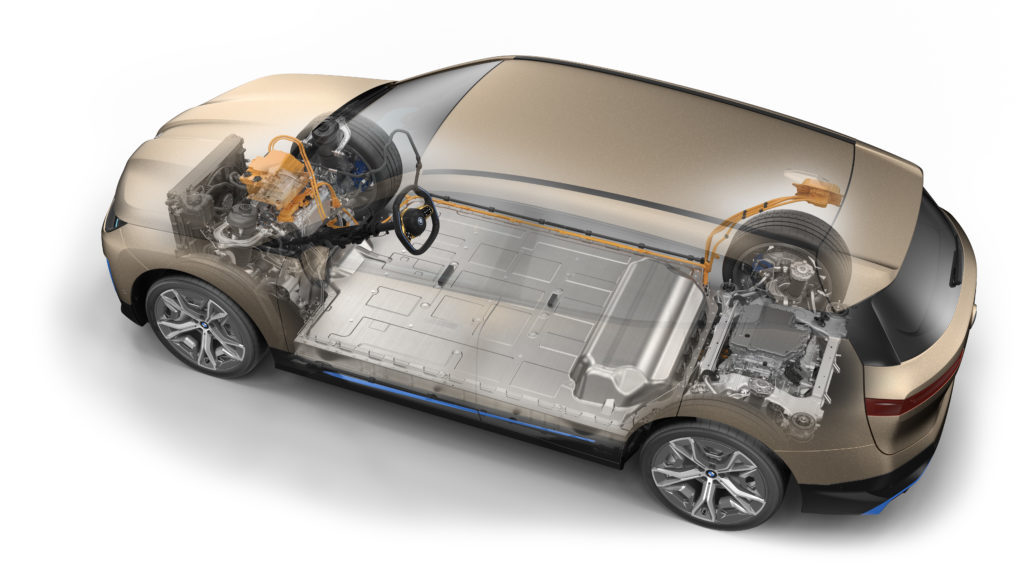 The battery pack also helps with aerodynamics by placing a smooth aluminum casing on the underbody of the vehicle. It and other underbody airflow features combine for another 6 miles of range.

“At the front end, streamlined elements direct the oncoming air past the wheels to prevent adverse turbulence,” BMW wrote. “Airflow along the rear is smoothed by the large rear axle cover and the rear bumper’s diffuser. All other underbody components are optimized in terms of their aerodynamic impact.”

Moving out to the sides of the vehicle finds aerodynamically optimized base wheels and or even fancier optional Air Performance Wheels. The latter are good for another 9 miles of range, BWM estimates.

“These wheels combine optimized aerodynamic properties with the elegance of a V-spoke aluminum wheel,” BMW wrote.

“The Air Performance Wheels are made of an aluminum base wheel with customized inserts between the spokes that gives them a flat design, especially on the outside of the wheel, resulting in far smoother airflow. They weigh around 15 per cent less than conventional light-alloy wheels.”

Finally, customers with the Sport package also receive “carefully engineered apertures in the outer areas of the front bumper which optimize the airflow along the vehicle,” according to BMW. “These vertically arranged Air Curtains divert the airstream in such a way that it flows along the faces of the wheels without generating the customary turbulence.” The OEM said the back of the iX Sport features air blades along the sides of the rear window which pair with a spoiler to reduce vacuum; together, the air curtains and blades deliver another 9 miles of range. 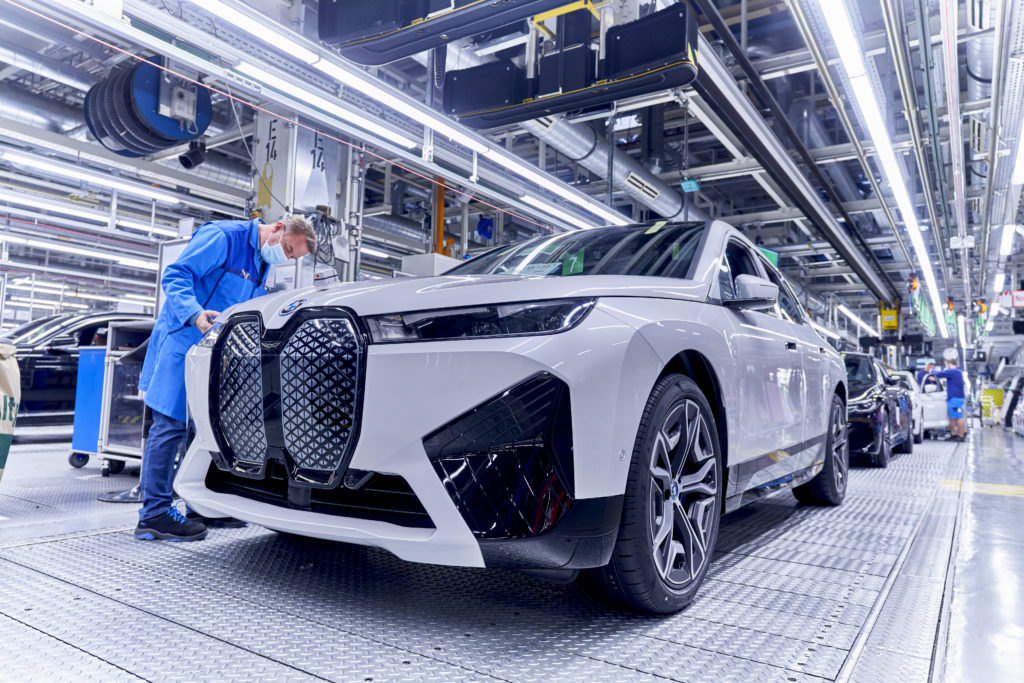 The OEM also said the vehicle would debut “a new, modular, scalable architecture on which the future of the BMW Group will be built.” We asked Satanovsky if this architecture was a reference to a chassis platform expandable to different sized BMWs and/or the “exterior and interior design architecture” and a debut “technology architecture” also mentioned in the news release.

“The iX is based on its own new architecture, both in chassis/body and interior which is not shared with other vehicles,” Satanovsky wrote in an email.

“It is not an X5 underneath for example. It is currently the only vehicle being built on this platform/architecture.

“Modular does mean battery packs of various shapes and sizes can be accommodated. In the case of the iX, this platform/architecture was designed for only EV vehicles so it will not need to accommodate PHEV or ICE engines as other modular platforms at BMW have been developed to do.” 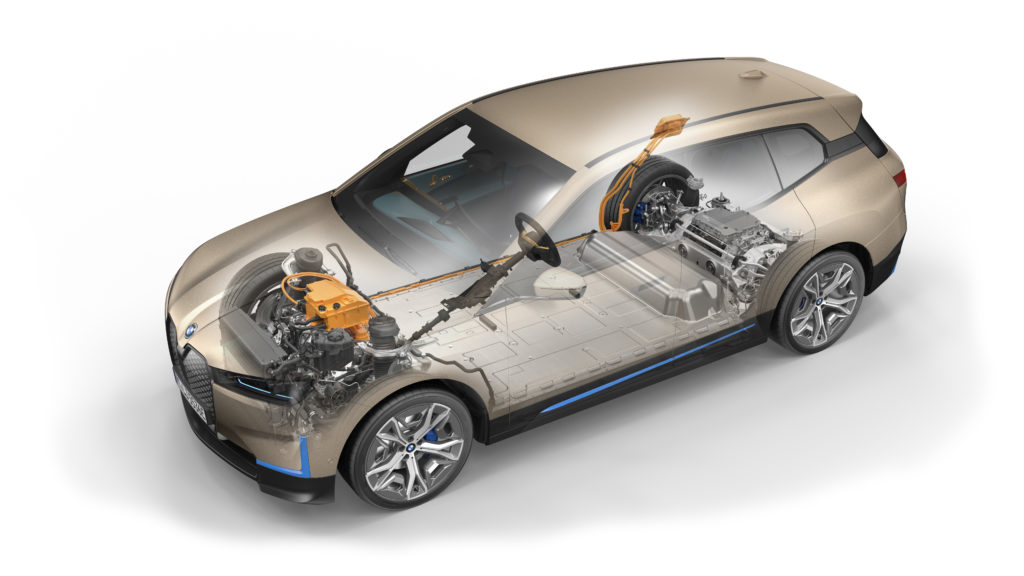 Satanovsky did discuss the other two architectures in his email as well.

BMW in its news release said the technology architecture “provides the platform for significant progress in the areas of digital services and future automated driving systems. For example, the level of computing power has been developed to process 20 times the data volume of previous models. As a result, around double the amount of data from vehicle sensors can be processed than was previously possible allowing for more advanced future assist systems.”

Satanovsky called the sensors and computing power “very important for the vast amounts of future data that will need to be processed in order to have the next generations of driver assistance systems (Level 3 and above).”

As for the interior, BWM said the iX offered a “luxurious lounge-style ambience.”

“The all-new architecture of the BMW iX cabin underpins a straightforward functionality that revolves entirely around the needs and of the driver and fellow occupants,” BMW wrote. “The eDrive concept means there is no center tunnel, adding to the open, airy feel while allowing extra front and rear legroom, sufficient space for storage and a center console crafted to look like a high-quality piece of furniture.”

Satanovsky said BMW reimagined the interior for “how people will interact with their vehicle in the future.” He also noted “shy tech” within the cabin.

“The philosophy behind shy tech is to hide controls until they are needed to create an uncluttered space,” he wrote. “Some of the ideas include integrating buttons and controls into wood or fabric trim which would illuminate only when you touch the surface with your finger but otherwise remain out of sight.” 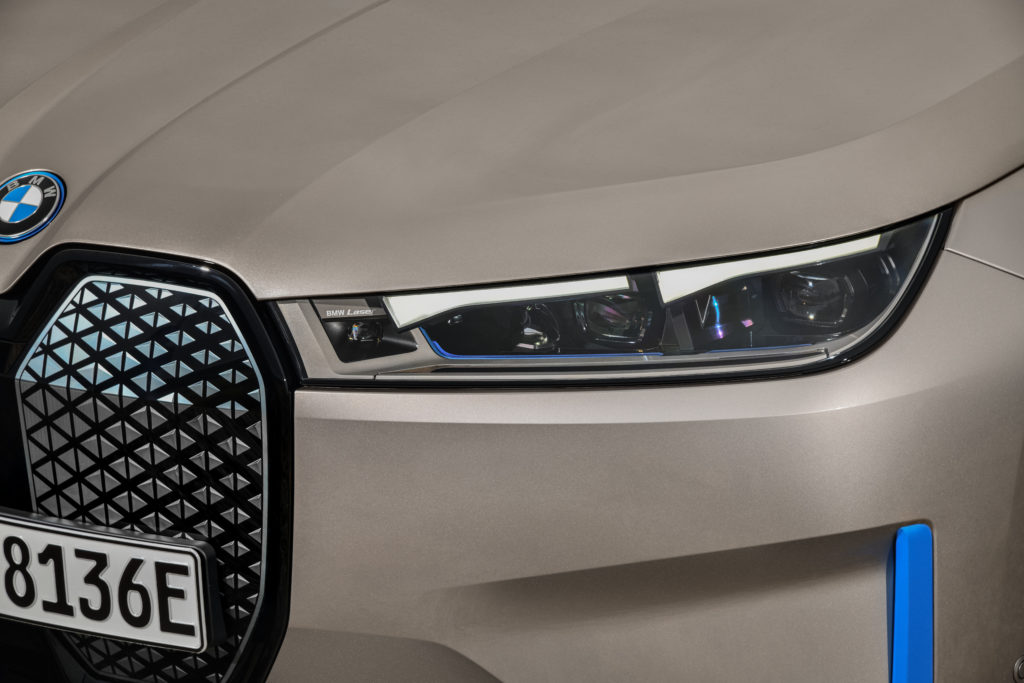 BMW on Nov. 11 described several other noteworthy body elements besides the components described above

We devoted a separate article to the technologically advanced panoramic roof and grille (and other exterior “shy tech” components); see that here.

But we thought we’d mention a few of the other exterior highlights here:

•The doors have frameless windows, a first for a large BMW Sport Activity Vehicle.

“The high-gloss black trim for the B-pillars provides an attractive contrast against the body color,” BMW wrote. “Three layers of sealing around the doors provides excellent acoustic comfort.” 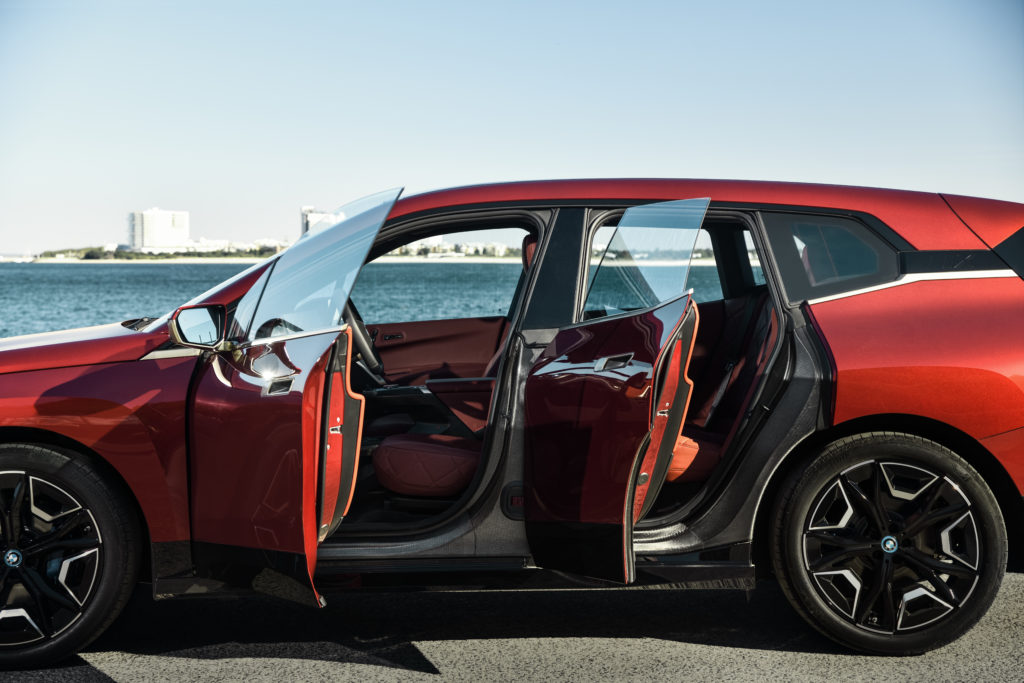 • Full-LED headlights and LED taillights come standard, and the lamps will be the slimmest BMW has incorporated on a “series-produced” vehicle. The

• The side-view mirrors are optimized for aerodynamics, according to BWM.

“The super-slim mirror bases attach to the lower edge of the side window surround, removing the need for the classic mirror triangle at the front of the side windows,” BMW wrote. “The mirror caps are painted in body color and bordered at their lower edge by the mirror base in high-gloss black, creating an attractive color contrast. The turn indicators measure only around two millimeters in width and are integrated into the exterior mirrors behind glass covers. 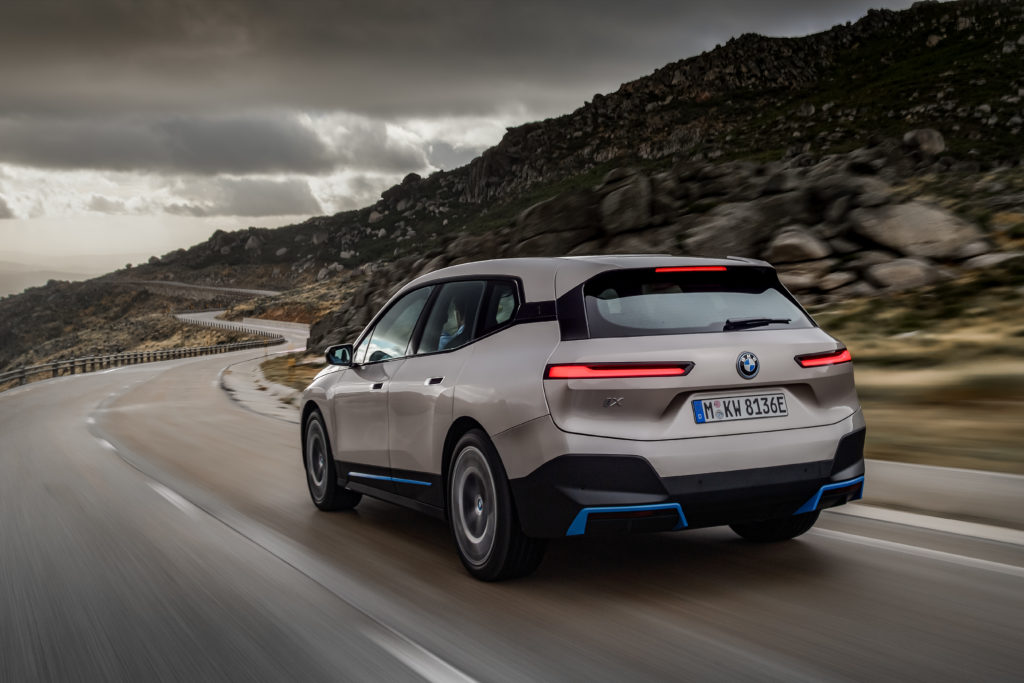 • The black surround from BMW X models returns but this time “forms a band around the entire car, from the front bumper along the sides into the rear.”

• Customers also have the option of either signature BWM i blue or high-gloss black design accents, including the circle of the BMW logos, accents in the outer areas of the bumper and strips on the side skirts.

• The rear bumper has a diffuser for aerodynamics.

• “The tailgate has no separation seams and extends across the whole of the rear, showcasing the expressive surfacing to a vivid effect,” BMW wrote. 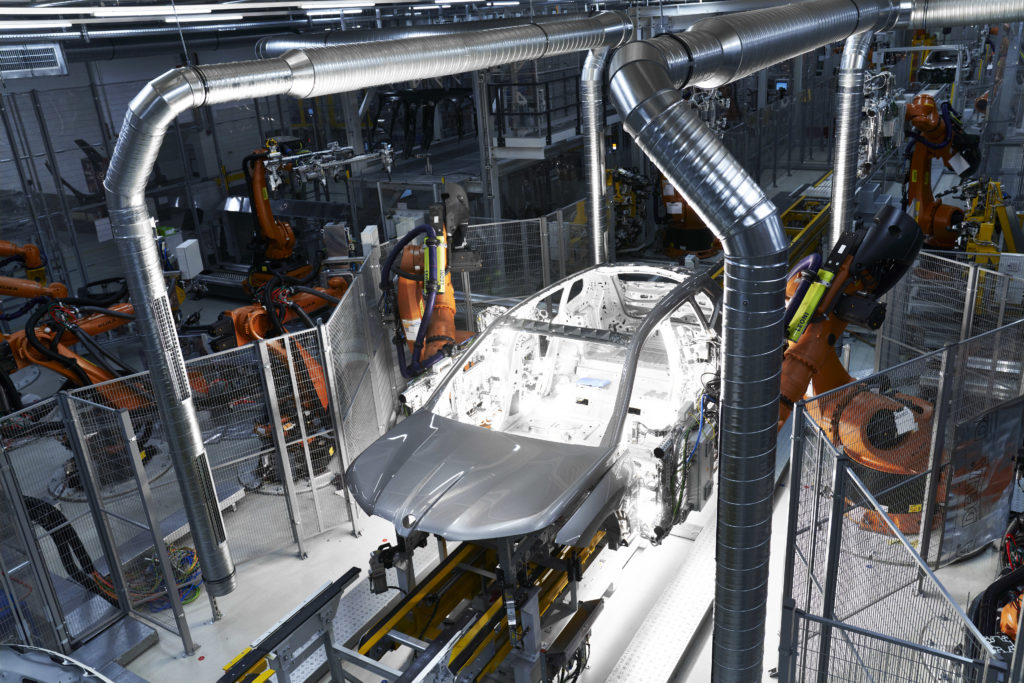 • The customer can’t actually pop the hood, but a repairer can. “The hood does not have an opening mechanism for use by the customer; the drive systems and power electronics can only be accessed by workshop technicians,” BMW wrote.

• However, the customer can open the BMW logo roundel to expose the filler neck for the windshield washer fluid. “It opens and closes – once the fluid has been topped up – with a gentle push,” BMW wrote.

A BMW iX is seen in the company’s Dingolfing, Germany, plant. (Provided by BMW)

The fully electric BMW iX powertrain is shown in this graphic. (Provided by BMW)

The BMW iX has frameless windows on its doors. (Provided by BMW)