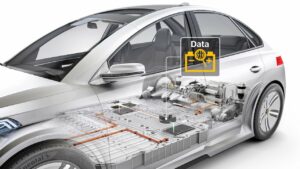 Continental has announced the development of two new specialized sensors: a Current Sensor Module (CSM) that can help protect the health of the battery, and a Battery Impact Detection (BID) system that can detect and warn of impacts to the battery pack’s protective structure.

Continental said the BID can help to significantly reduce the weight of electric vehicles (EVs) by eliminating the need for the heavy “armoring” currently used to protect the batteries, which are typically mounted in an underfloor position where they contribute to a low center of gravity.

The BID, meant to be used in combination with a lightweight structure, “detects underfloor impacts and alerts the driver if a stop at a garage is necessary as a result,” Continental said. 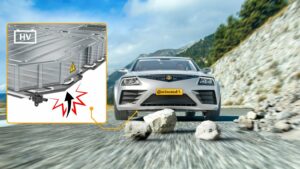 Without such a system, the driver would have to look at the damage and decide if a trip to a repair shop was needed. “This is not a satisfying situation as there is poor visibility underneath a car, plus it takes a trained eye to assess the true damage,” Johannes Clemm, Managing Director Continental Safety Engineering International in Alzenau, Germany, said in a statement.

The pressure sensor-based BID detects and classifies underfloor impact events, allowing the driver to take precautions to prevent a battery fire. “In addition, the BID identifies the area of the damage, so the battery management can empty the cells in that area to prevent any risk of fire,” Clemm said.

The company suggested that when low-speed contact occurs, the BID could tell a fast-acting suspension system to raise the vehicle, reducing the severity of the damage.

Compared with current metal underfloor protection, the BID system can save up to 50% of weight, Continental said.

The pressure sensors used in the BID were derived from Continental’s Pedestrian Protection System (PPS), which has been in series production for more than 10 years and fitted to millions of vehicles. The system detects impacts via air-filled silicone tubes at the bottom of the battery compartment, and can determine an impact’s location and severity. 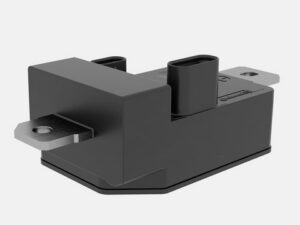 The CSM can measure the current and detect temperature at the same time, providing information to the vehicle’s battery management system.

“Considering that the battery is the single most expensive component in an electric car, the CSM was not just developed to protect the battery from overcurrents, but it will also help to retain the battery parameters by limiting ageing effects,” Continental said.

The system protects the battery from overstress by controlling the charging current to limit the temperature gradient.

“A lithium-ion battery has an optimum temperature span in which it is very safe and ages very slowly,” said Horst Gering, Program Manager in the Passive Safety and Sensorics Segment. “However, fast charging the battery is a tradeoff between keeping the battery safe and healthy and limiting the duration of charging. This is best done on an exact data basis.”

Continental said that the CSM could be integrated into a vehicle’s battery disconnect unit, or into the battery pack itself. The sensor is go into series production before the end of 2022, and will be offered in a global automaker’s EV, the company said.

“Vehicle electrification brings new use cases and thus opens up more opportunities to our sensor activities, because an electric car has all the sensor needs a conventional car has – and more,” Laurent Fabre, Head of Passive Safety and Sensorics Segment at Continental, said in a statement. “Protecting the battery and retaining its performance, for instance, are two additional tasks in electrified vehicles. The Current Sensor Module and Battery Impact Detection solutions serve both purposes.”

The Battery Impact Detection (BID) system warns a driver if an underfloor impact might have damaged the battery pack. (Provided by Continental.)